This is the first in a series of "catching up" posts to bring my blog up to date with projects from the past several years. (See my recent Blogoversary 2020 post for an explanation).
Included in this rather long and photo filled post are counted cross stitch and needlework pieces that I've worked on since 2016.  They are organized chronologically, beginning with the earliest completely finished pieces. I've also included some in progress and partially finished pieces that I still hope to finish.

2017:
Mill Hill Evergreen Sleigh Ornament Kit on perforated paper
A Westie friend on Facebook posted a link to this kit sold by 123Stitch.com in 2017 and of course I just had to order it! It took a while to find time to stitch and bead it, but I managed to complete it in December just in time to place it on our Westie Christmas tree.
The design features counted cross stitch with cotton floss as well as 2 sizes of Mill Hill beads, embellished with a brass Christmas tree charm. I added a hanger using gold metallic DMC perle cotton from my stash. 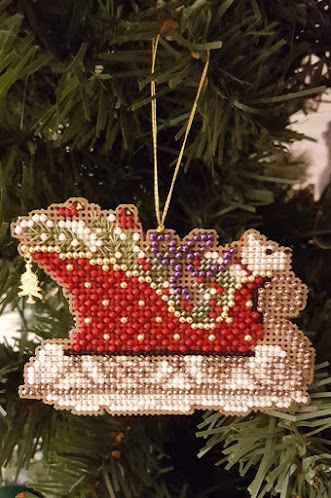 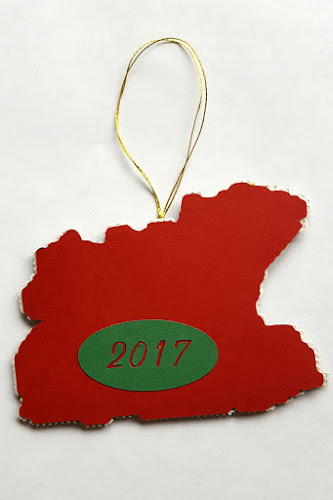 I used my Brother ScanNCut (purchased in January 2017) to make a backing for the ornament. After trimming the perforated paper from the edges of the ornament, I made a color copy that could be scanned by the ScanNCut, then cut the shape from red card stock. I had to reduce the size slightly so it wouldn't show through on the front (I have since learned a better way to cut slightly smaller). I also cut the date from green card stock. I assembled the pieces after running the card stock through my Xyron machine to apply adhesive. This was one of my first attempts to use the ScanNCut and although there was a bit of a learning curve, I'm pleased with the result.
2018:
Home Chilly Home - The Silver Needle, December 2008 Kit - Flatfold Easel finish
Material Girl Kris was clearing out her stash of needlework and quilting kits and generously allowed me to claim this retired Secret Needle Night kit from The Silver Needle. The design features a variety of fibers stitched on an evenweave fabric. The cross stitching was finished in July 2017; easel finish done in Dec 2017/January 2018. 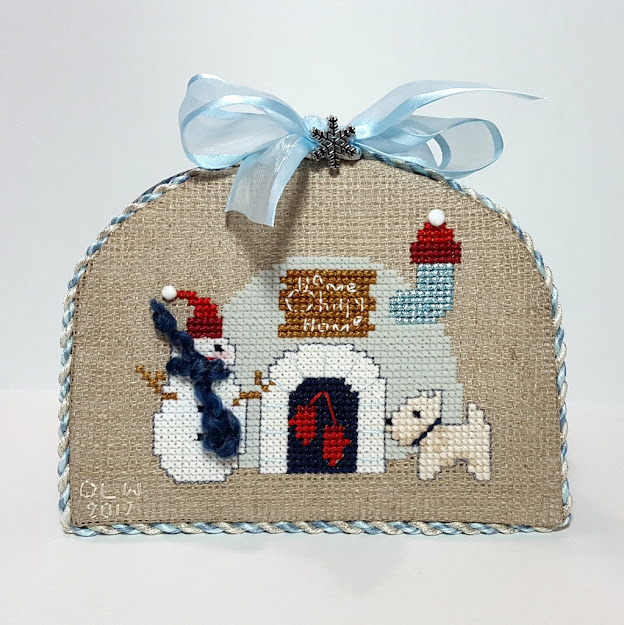 The flatfold easel finishing instructions were no longer available on the Silver Needle website, but I found an alternative technique through Pinterest. Because I intend to use this technique again, I took lots of photos along the way and will post a separate blog entry with details on the construction and assembly.
2019:
In January, Material Girl Denise and I traveled to Where Victoria's Angels Stitch in Clifton to retrieve her samplers that had been displayed in the shop. It was my first visit since Keli was a puppy and we enjoyed catching up with the shop owner, Tawny, after so many years. We spent an hour or so browsing through the shop and I found two dog themed kits from Mill Hill. I also purchased extra Westie buttons and charms.

Window Friends - Mill Hill Buttons & Beads Kit, Spring Series 2006 MH14-6106
Completed in March: Since Keli's passing in October 2018, I've felt compelled to work on the Westie projects that have been in my stash for years, but adding these two new kits to the mix felt appropriate. I stitched this first design in memory of both Keli and Wyndi, my first Westie girl. The design features counted cross stitch in cotton floss on perforated paper, embellished with Mill Hill beads and a Westie button. I added a second Westie button to the frame so both my girls would be represented. 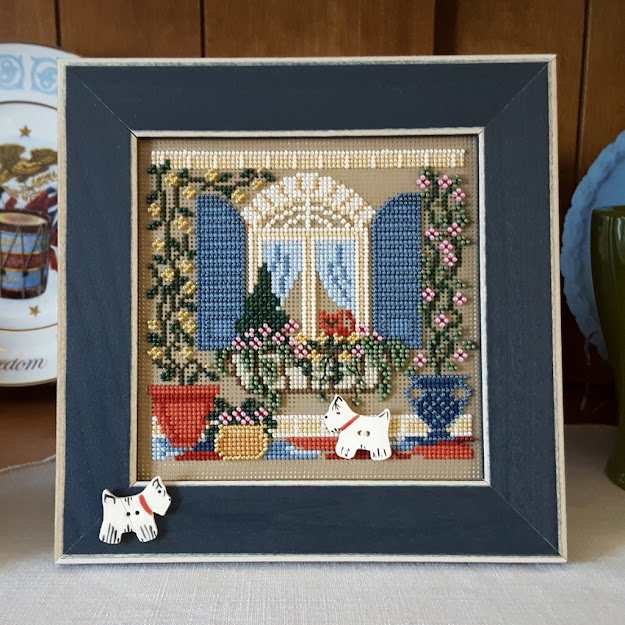 Puppy Paws - Mill Hill Buttons & Beads Kit, Spring Series 2013 MH14-3101
Completed in April/May: Although the dog in this project is a tan color, the expression reminded me of Penny. I originally thought I might try to change the color to a lighter ecru, but decided to leave it as designed to preserve the subtle shading. This design also features counted cross stitch in cotton floss on perforated paper embellished with Mill Hill beads and a bone shaped button. 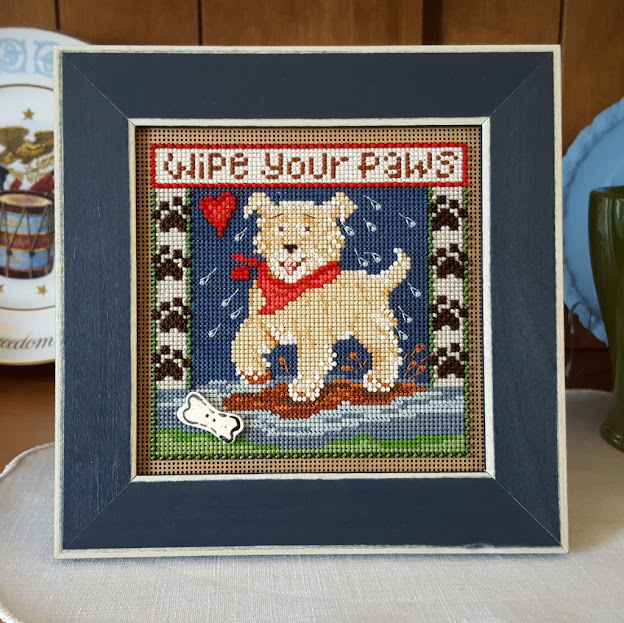 The two frames are from Mill Hill, size 6x6 inches square in matte blue and were ordered online in April. I used scrap pieces of mat board behind each piece inside the frame, with the mat color matched to coordinate with and highlight the finished stitching.
Terriers & Roses - Crewel embroidery kit
Stitching completed July:  This was a kit that has been in my to do box for a very long time. I purchased it in 2002 after Wyndi passed and while Keli was still a young puppy. At the time it appealed to me simply because of the Westies.
Although I thought about starting this kit often over the years, it never seemed to be the right time for it, maybe because there are two Westies in the design. But now that both my girls are gone, it helps to think of them together like this at rainbow bridge. In this image, Keli would be on the left, Wyndi on the right. 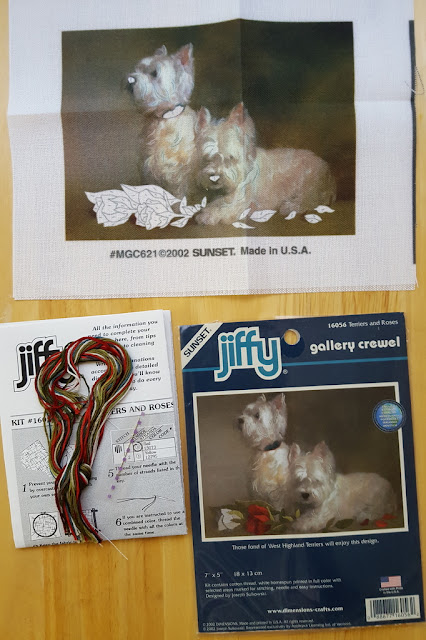 The crewel embroidery was a little bit of a challenge since I hadn't done satin stitches in quite a few years. The design features a printed image on evenweave fabric, with decorative embroidery (stem stitch, satin stitch and french knot) to enhance the faces and fur and to fill in the roses. 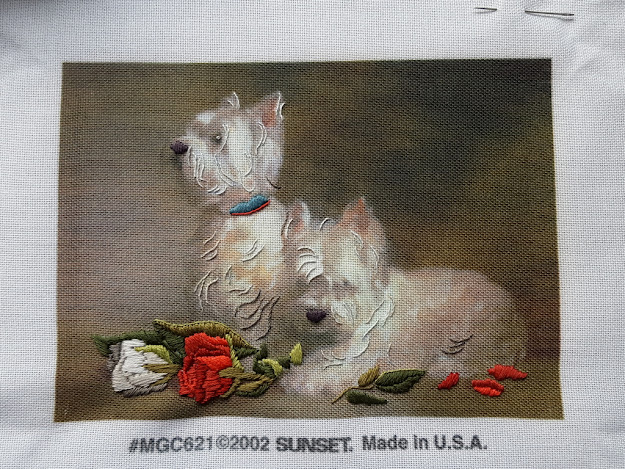 When the stitching was complete, I mounted the piece on foam core and framed it using a purchased 8x10 frame from Hobby Lobby. I cut the mat myself from mat boards in my stash with a 5x7 opening. Photographed without glass to avoid reflection. Framed October 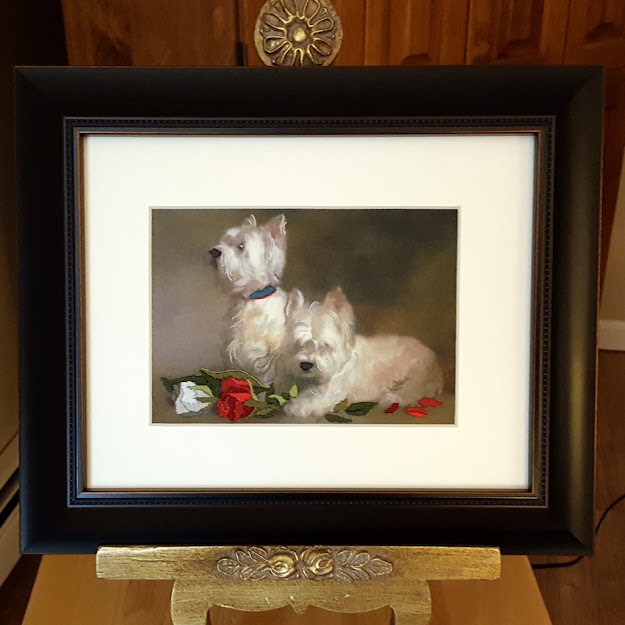 Christmas Puppy Latch Hook Rug from J.P. Coats
Latch hooking complete, February 2019:  This is another kit that has been in my to do box for a very, very long time. Purchased online from JoAnn.com in November 2002, I must have started a few rows sometime before 2015 because when I picked it up in November 2015, there were a dozen or so rows completed. I tried to work on it for a few nights, but at that time, my fingernails were already affected by chemo, so had to put it away again. Beginning in late December 2018, I worked on it steadily and managed to finished about 3-5 rows per day until the last stitch in February 2019.
This is still in progress until I finish the raw edges of the rug. I found some simple finishing instructions on Pinterest and now it's a matter of time and energy. I took a lot of in-process photos along the way and plan to draft a separate blog post when it is completely finished.  Update: finished and blogged: Christmas Puppy Latch Hook Rug Finished 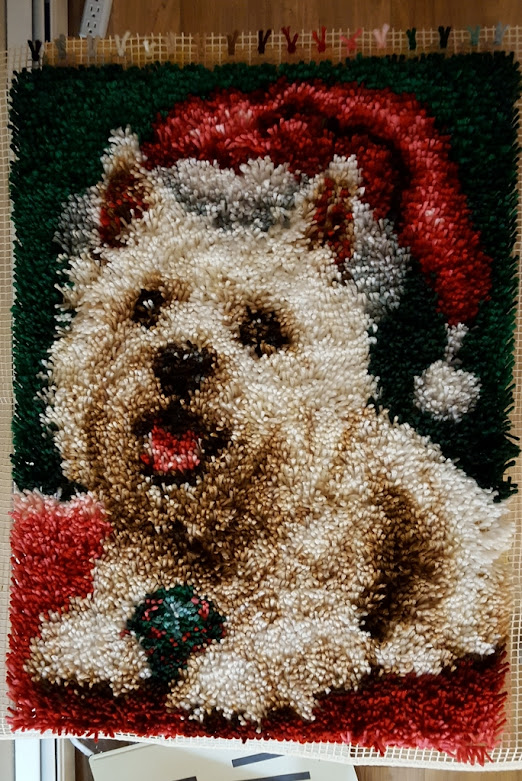 Winston the Westie Felt Plush Dog by Squishy-Cute Designs
Another unfinished Westie project worth mentioning, I purchased this PDF pattern of Winston the Westie through Squishy-Cute Designs on Etsy in September 2017 and started it in December.
The wool felt pieces were cut using my ScanNCut machine. This design features surface embroidery (backstitch, lazy daisies, french knots and double running stitches) in cotton embroidery floss on the felt head and body of the dog. Instructions also include a bandana made in cotton fabric. 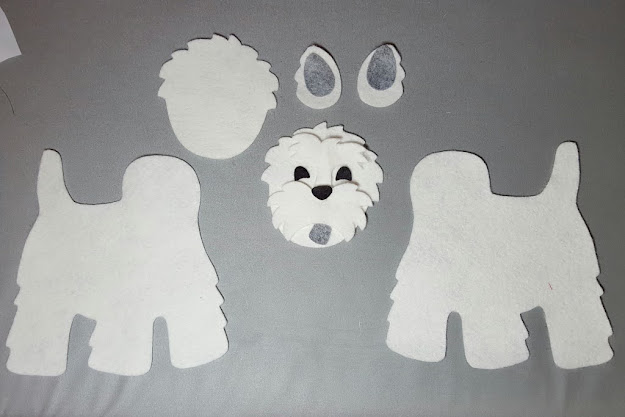 I don't remember how I originally found this pattern - it was either through a search on Etsy or someone posted a picture in one of the sewing or Westie groups I follow on Facebook. It's adorable and I'd really like to finish it soon. I will try to take additional photos so this will be part of a separate blog post when finished. Update: Finished and blogged: Finished: Winston the Westie Felt Plushie
MORE IN PROGRESS/PARTIALLY FINISHED:
Some of these kits were in my needlework stash for years; several of them were graciously given to me by Material Girl Kris as part of her destashing spree.
These are all "finished" in the sense that the cross stitching is complete, some buttons and embellishments have been attached and they've been pressed flat. I plan to finish all 6 of the Lizzie Kate kits as standing figures, just like Paddy O'Hare and Betty Broomstick. I hope to finish the others as flat-fold easels, similar to Home Chilly Home above. If and when these are completely finished, I will post new photos.
2016
Pansy O'Hare - Lizzie Kate Special Edition Kit (retired) - counted cross stitch
Pansy is Clara and Henry's daughter and is stitched with hand dyed cotton floss on hand dyed linen. I don't recall exactly when I started stitching this piece, but I think it was around 2014 or earlier. I picked it up again around Fall 2016 while I was recovering from my original cancer treatments. I had lost my fingernails due to chemo and couldn't do any machine sewing because I couldn't grasp pins and other tools. But I could hold on to an embroidery needle so I stitched a little at a time until it was complete.
Finished and blogged: Pansy, Clara, Henry O'Hare Stand Up Figures 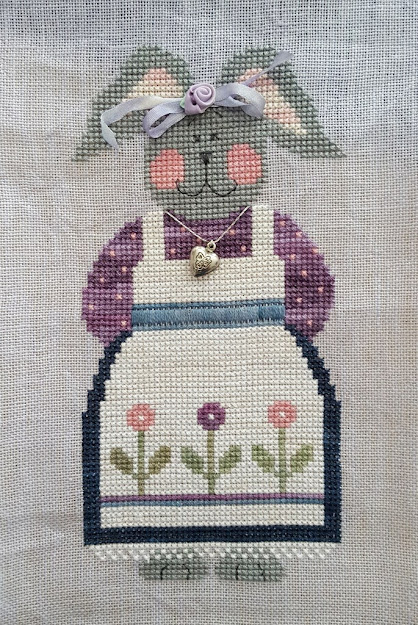 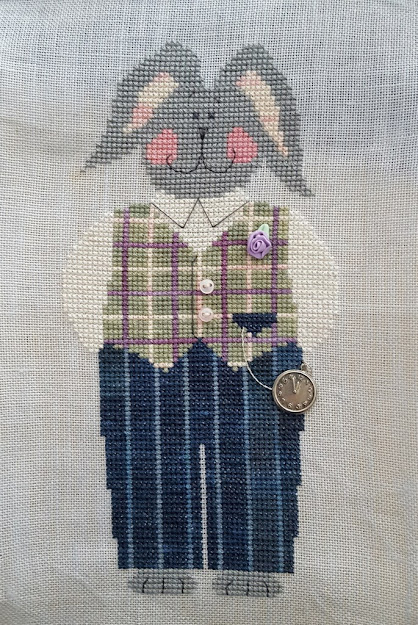 Clara O'Hare - Lizzie Kate Special Edition Kit (retired) - counted cross stitch completed July
Stitched using hand dyed cotton floss on hand dyed linen. This is another one of the kits I received from Kris. When Henry was finished, I was on a roll, so of course, Clara had to be next in line to complete the family.
Finished and blogged: Pansy, Clara, Henry O'Hare Stand Up Figures 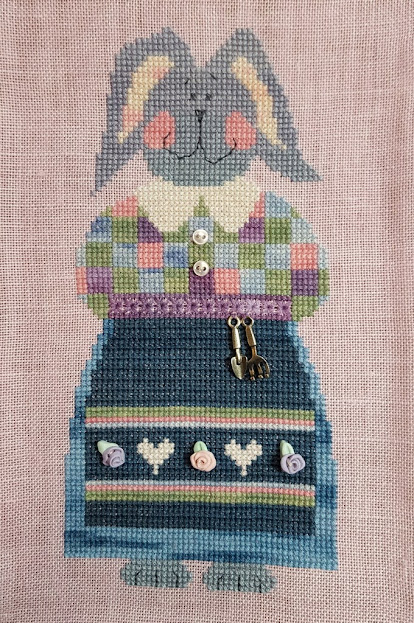 Both Henry and Clara were retired designs until recently. According to the Lizzie*Kate Blog, The Bunnies are Back and have been updated with new fabrics and embellishments as of March 2020.
Needle Nick - Lizzie Kate Special Edition Kit (retired) - counted cross stitch completed Fall 2017
Stitched using DMC and hand dyed cotton floss on 14 ct Sand Lincoln cloth evenweave fabric, embellished with beads, buttons, jingle bells and brass charms. This kit was from my stash; since Christmas was coming, I decided to keep on stitching the stand up figures. Needle Nick's kit includes detailed instructions to construct the stand up figure so I'm still planning to start with him as practice, then continue with the rest of the bunnies and snowmen. (Finished and blogged: Needle Nick Stand up Figure) 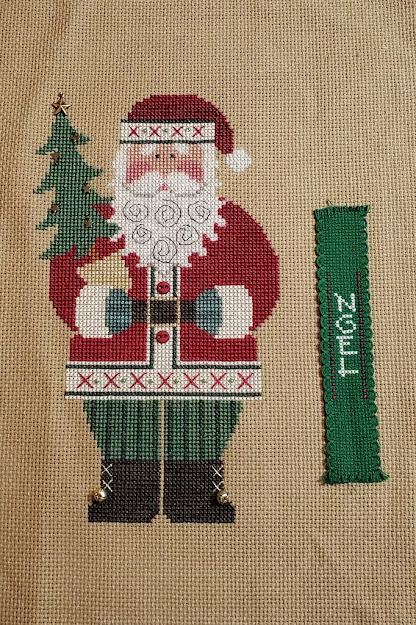 Needle Nick was a retired design, but according to the Lizzie*Kate Blog, Needle Nick and Flossie Claus are Back and have been updated with new fabrics and embellishments as of November 2019.
2018
Joe Snow - Lizzie Kate Special Edition Kit (retired) - counted cross stitch completed January
Stitched using hand dyed cotton floss on hand dyed linen. This kit was from my stash. (Finished and blogged: Joe Snow and Sally Snow Stand up Figures) 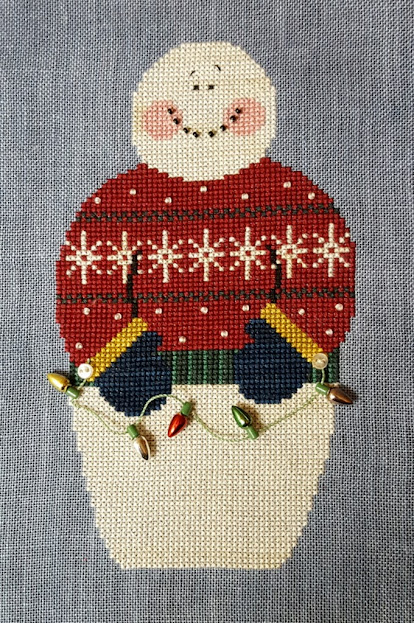 Sally Snow - Lizzie Kate Special Edition Kit (retired) - counted cross stitch completed December
Stitched using hand dyed cotton floss on hand dyed linen. This kit was in my stash, and is the last in the series of stand up figures to be finished. (Finished and blogged: Joe Snow and Sally Snow Stand up Figures) 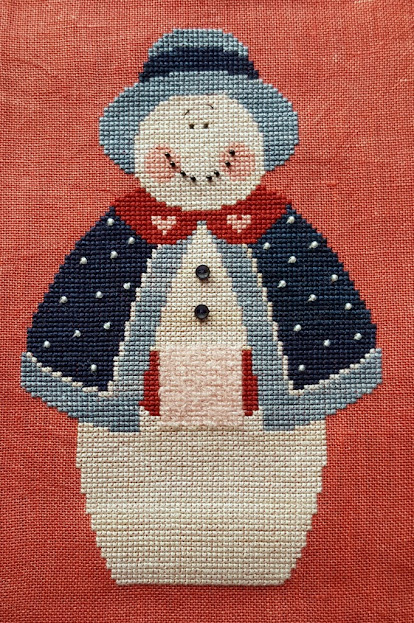 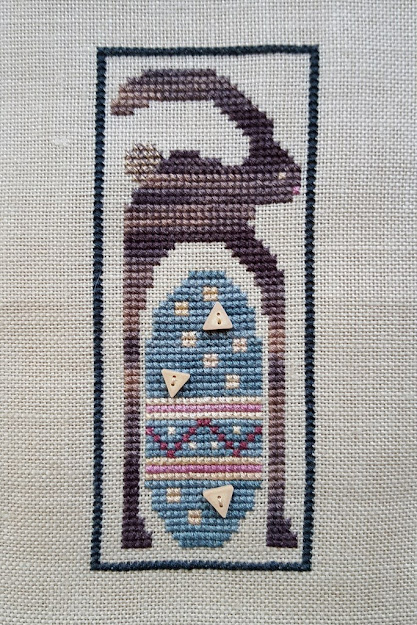 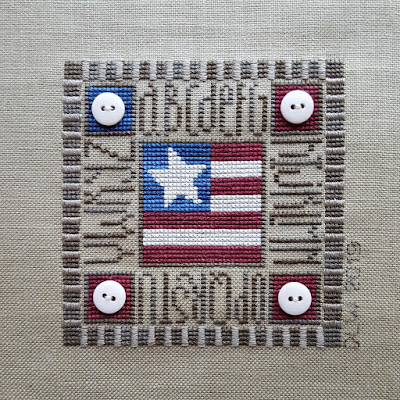 More photos of these needlework projects can be viewed in my Google photo album: Cross Stitch, Counted Thread, Needlework
On a personal note: I mentioned in my Blogoversary post that I may experience interruptions in finishing these "catching up" posts. Well, the past few weeks have been a challenge. I've been dealing with intermittent pain in my leg and fatigue from the radiation, then a bout of nausea and vomiting that required treatment and further tests to determine the cause. When I do feel okay, I've been popping in to Blogger and getting these posts populated with photos and going through my notes to jog my memory of each project. Even though I'm not able to do much else, it's been nice to go back and remember each one and I feel motivated to try to finish some of the in-progress pieces soon.
Labels: Holidays Needlework Scan N Cut Westie Embroidery Westies