Meet the O'Hares: Henry, Clara, Pansy and Paddy! They are all made from Lizzie Kate Special Edition Kits. Three of them were included in my July "catching up" post on Needlework Finishes. 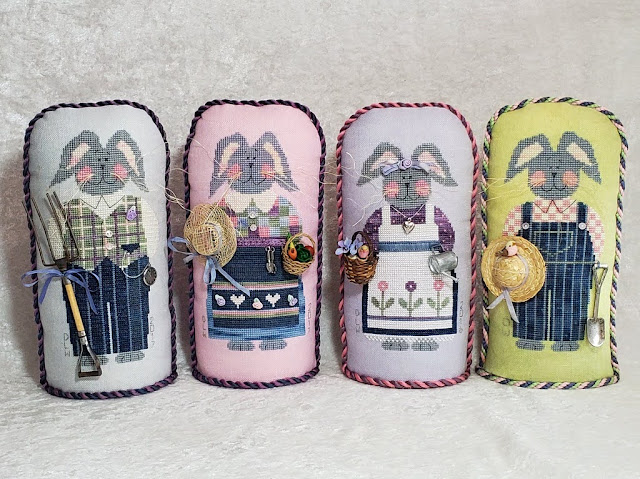 I stitched Paddy first, back around 2003 and at some point I added a couple of the other kits to my stash. 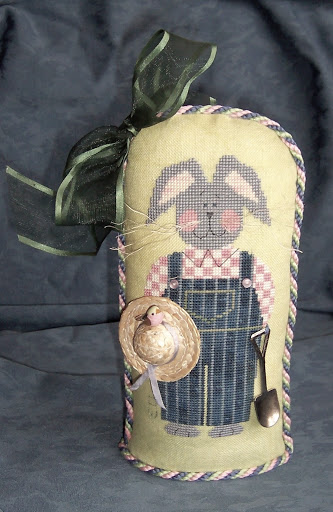 I got at least one kit from Material Girl Kris when she was downsizing her needlework collection. The fact that I got even one kit from her was amazing, considering her affinity for bunnies!
According to the kit packaging, Pansy and Paddy are the daughter and son of Clara and Henry. Back when I stitched Paddy, I made a 3-color, double twisted cord that I must have seen demonstrated at an EGA meeting. I wasn't able to locate the instructions to make a similar cord for the recently finished bunnies, so they all have 2 color, single twist cord. 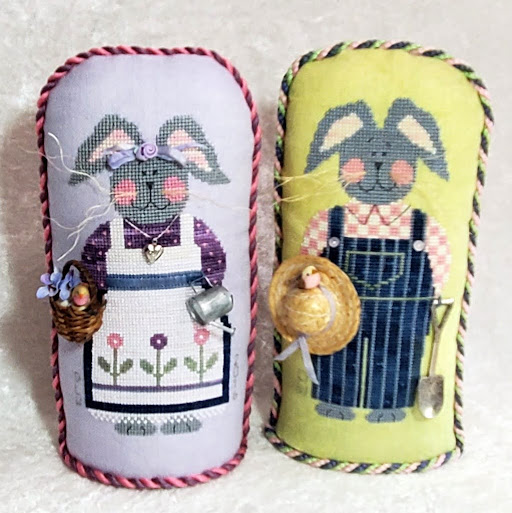 Clara and Henry O'Hare are the parents of Pansy and Paddy. They must all be farmers or at the least avid gardeners, because all of their embellishments include gardening tools. Henry does seem to be a bit overdressed for using a pitchfork... 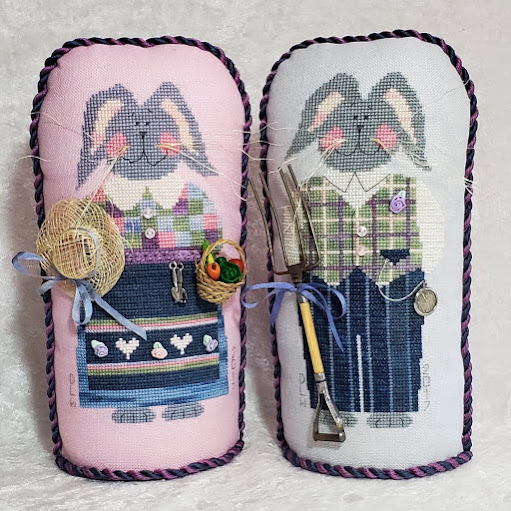 Of the three more recently stitched pieces, Pansy was completed first, in 2016. Since they are siblings and I wanted to have some similar features on both, I used the same backing fabric for Pansy that I had used for Paddy. And yes, I still had it in my fabric collection after 15+ years! 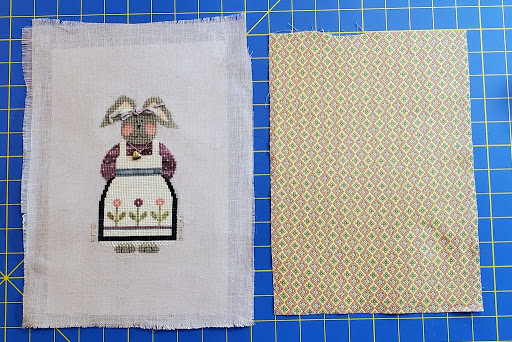 The needlework and backing were treated in the same manner as Joe and Sally Snow. The needlework was backed with a muslin lining because I had already attached some of Pansy's embellishments and I didn't want to risk damaging them with an iron on interfacing. The backing fabric did get a layer of fusible woven interfacing. 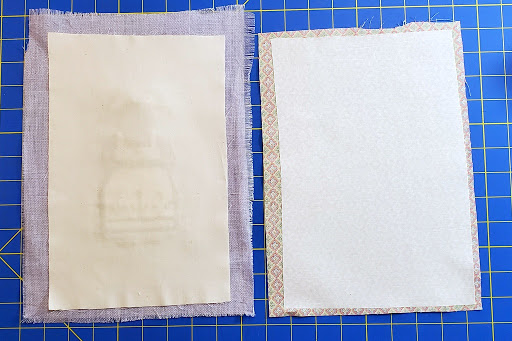 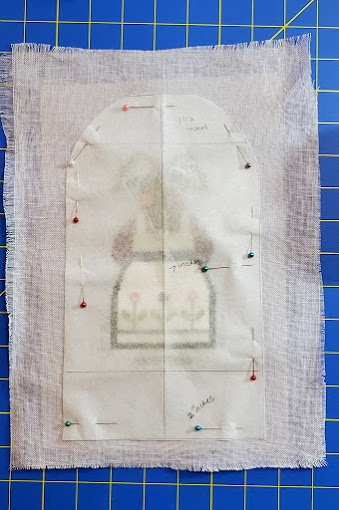 Clara and Henry were cut based on the same pattern piece. 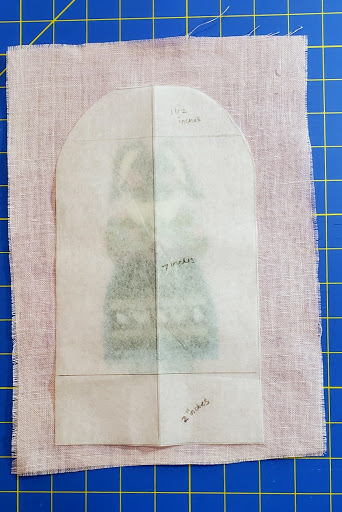 For Clara and Henry, I chose a backing fabric in a violet and purple paisley pattern that coordinates with colors in their outfits. 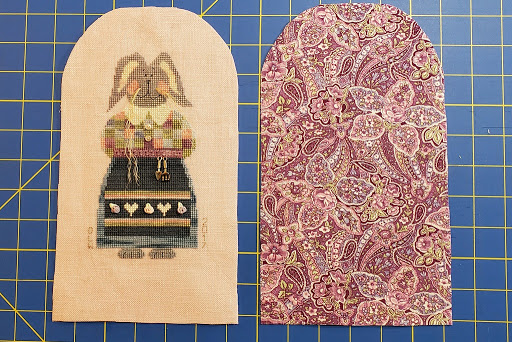 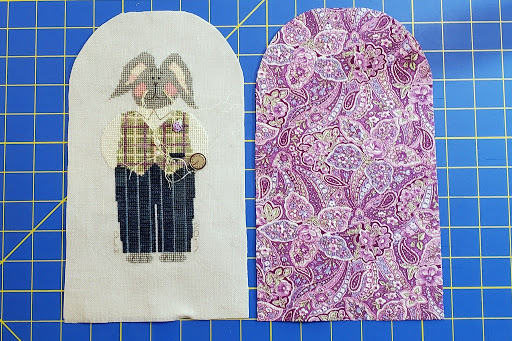 Just like Joe and Sally, I used my Brother ScanNCut to cut out the bottom base pieces of cardboard. I tested the size by cutting out cardstock before moving on to the cardboard ovals, sized 3.75 inches by 3.25 inches.
I set up my ScanNCut to cut the cardboard just like Joe and Sally's base pieces. The first two cuts were fine, because I used the same piece of cardboard. For the third cut, I used a slightly different cardboard and I should have done a quick test cut first, because I ended up slicing right through the cutting mat! 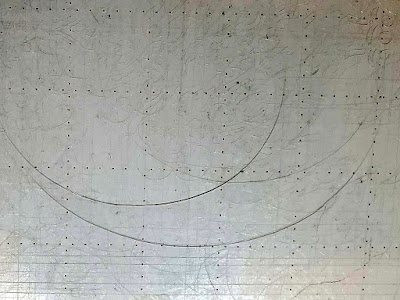 The mat was repaired with some packing tape on the bottom side, so it is still usable in a pinch. It was my original mat that I've used for 2 years, is well worn and not very tacky anymore, so it needed to be replaced soon anyway. Fortunately, I had a spare on hand already, so now I'm breaking in a new mat.
The base cardboard pieces were all covered with their corresponding fabrics, the outside was glued in place, the insides were gathered. 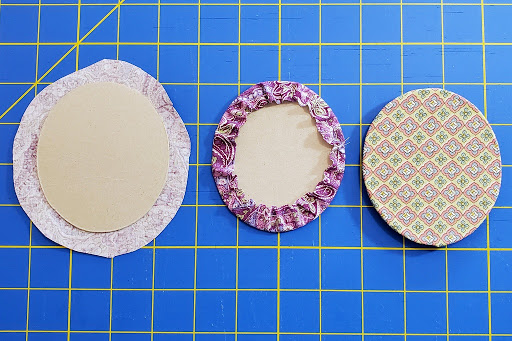 When the bunnies were all stuffed and their base pieces were stitched in place, it was time to make the twisted cord. This was when I reached out to the Material Girls for help with getting the right colors of embroidery floss in late July.
I needed to make about 33 inches of finished cord for each bunny. I used 4 strands of 6-ply floss, about 108 inches in length of each color.
Pansy's cord was pink and violet (shown below with a scrap of Paddy's cord) 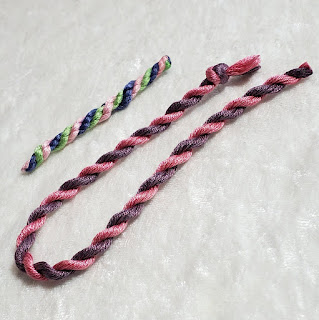 Originally I planned to use pink and purple for Clara and blue and purple for Henry, but the pink just didn't look right with Clara's dark skirt, so they both have the same two color cord. It also coordinates with their backing fabric. 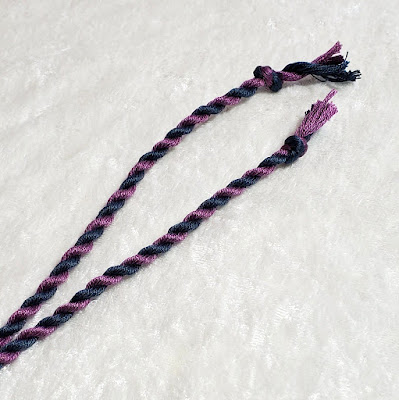 While I was waiting for the embroidery floss to arrive, I worked on some of the finishing details.
Pansy's and Clara's kits included miniature baskets but not the contents to fill them. I searched online for miniature birds and vegetables and found these on Hobby Lobby's website for a reasonable price and no minimum quantities. Since I couldn't get to the local Hobby Lobby in July/August to see them in-store, I ordered online and hoped for the best. 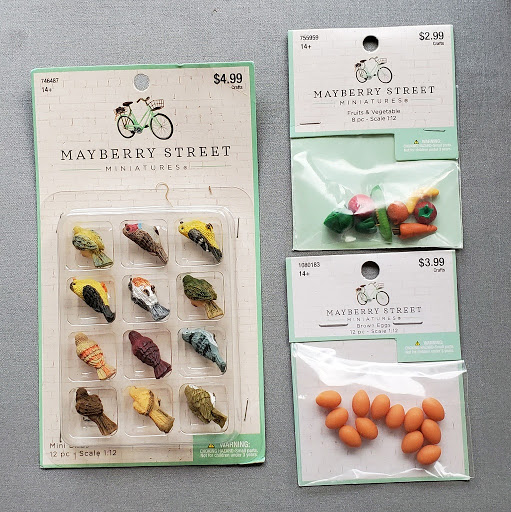 Now I was waiting impatiently for both floss AND miniatures to arrive. But I didn't have long to wait. By mid-August I was able to finish up the final embellishments.
For Pansy's basket, I stuffed a little Spanish moss in the bottom. The miniature bird I chose is similar in color to the bird from Paddy O'Hare's hat. I painted the brown eggs with acrylic paint in a dull sandy white color before gluing them into the bottom of the basket. The flower petals are from a silk lilac stem that lost one of its blooms. 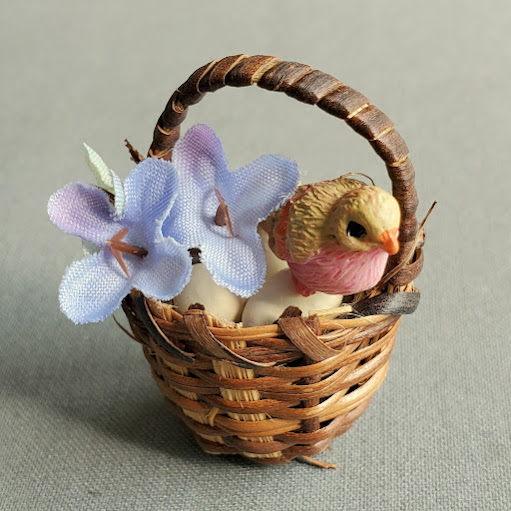 For Clara's basket, I stuffed in some Spanish moss, then glued in all the vegetables from the package. 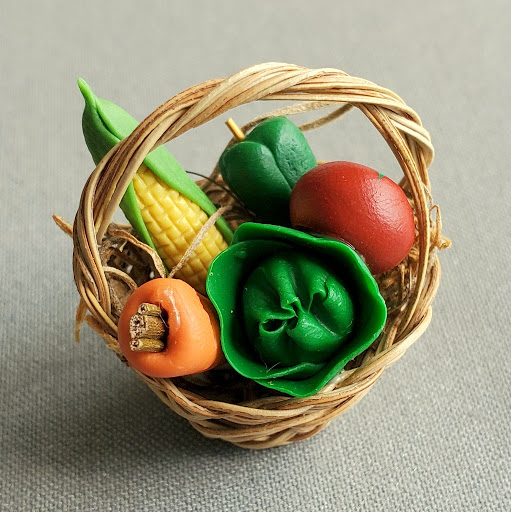 The finished size of each O'Hare stand up figure is about 9 inches tall by 4 inches wide and 3.5 inches deep (front to back).
Pansy's watering can was stitched on by hand, her basket is attached with glue. 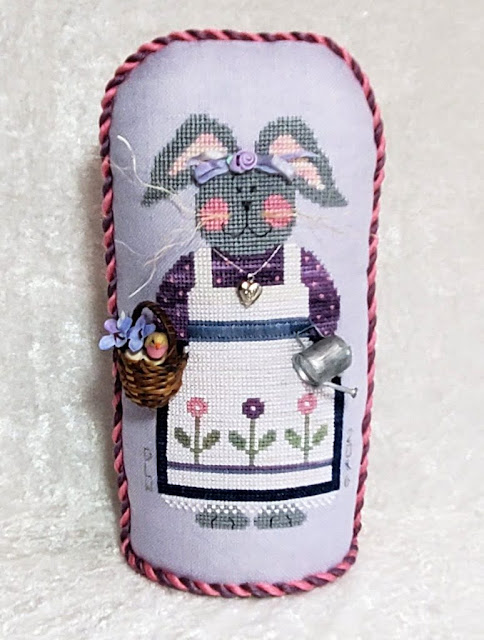 Clara's hat has a silk ribbon tied in a bow around the crown. The hat and basket are attached with glue. 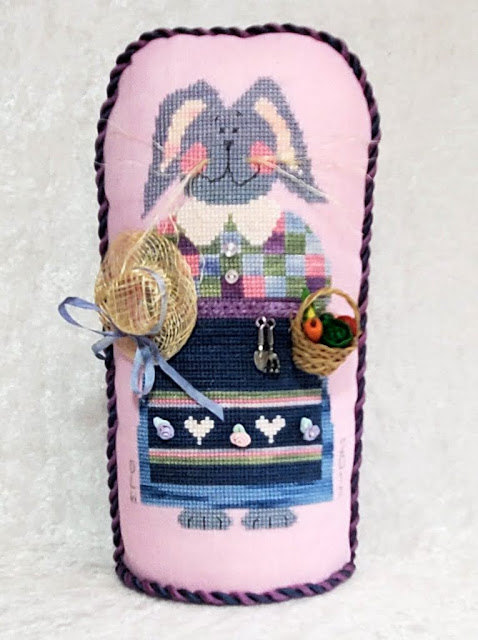 Henry's pitchfork has a silk ribbon tied in a bow for decoration. The pitchfork is tacked on with hand stitches. 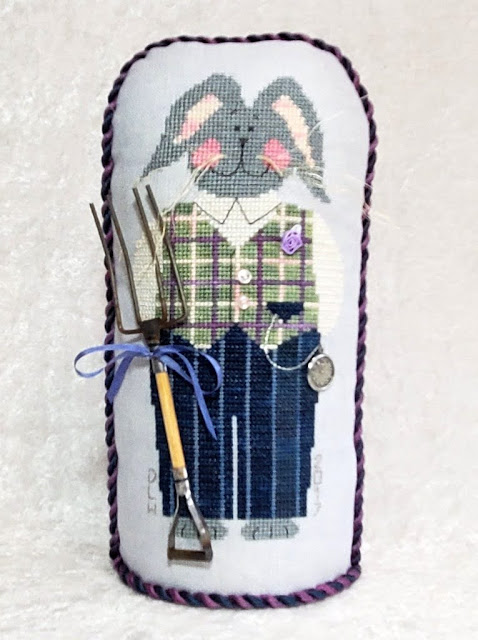 Note: Both Henry and Clara were retired designs until recently. According to the Lizzie*Kate Blog, The Bunnies are Back and have been updated with new fabrics and embellishments as of March 2020. Paddy and Pansy appear to be still in retirement.
Recap of supplies used in this project:
More in-progress photos can be found in my Google photo album, Stand Up Figure Finishing for Counted Cross Stitch
Labels: Holidays Needlework Scan N Cut Tutorials and How-to's