Needle Nick is the first of 6 stand up figures I included in my July "catching up" post on Needlework Finishes. 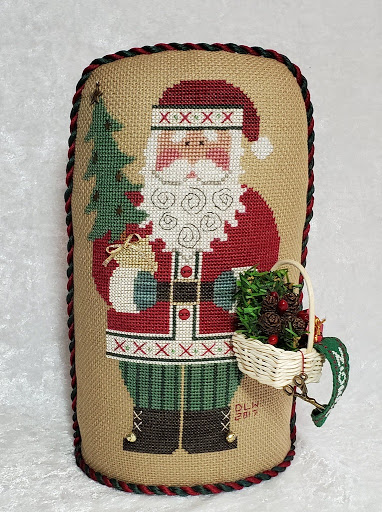 Nick was stitched using DMC and hand dyed cotton floss on 14 count Sand Lincoln cloth evenweave fabric, embellished with beads, buttons, jingle bells and brass charms provided in the limited edition kit by Lizzie Kate. The cross stitching was completed in Fall 2017. I started finishing the stand up figure in mid-July and finished in mid-August of this year.
Needle Nick's kit included detailed instructions to construct the stand up figure so I used him as a guide to finish the other five stand up figures.
The kit came with backing fabric as well as a pattern piece for cutting the main figure shape and the bottom base piece. I traced both pattern pieces onto Pattern Ease for easier pinning and cutting.
Before cutting out the main figure shape, I added fusible woven interfacing, Pellon SF-101, to the back of both the needlework and backing fabric, as directed in the kit instructions. 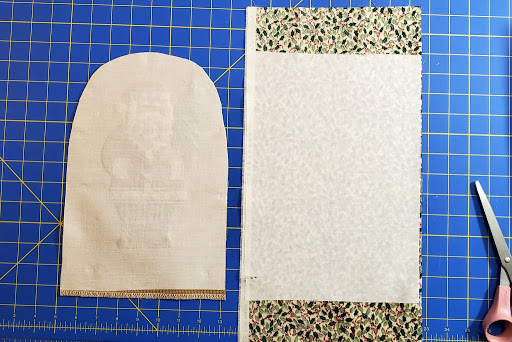 Here are the front sides of both the needlework and backing fabric after cutting them to shape. 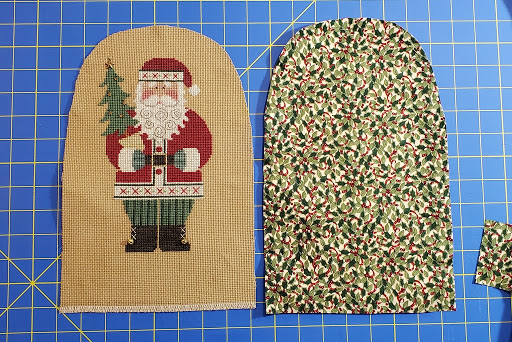 These pieces were pinned with right sides together, I used extra pins around the curves. 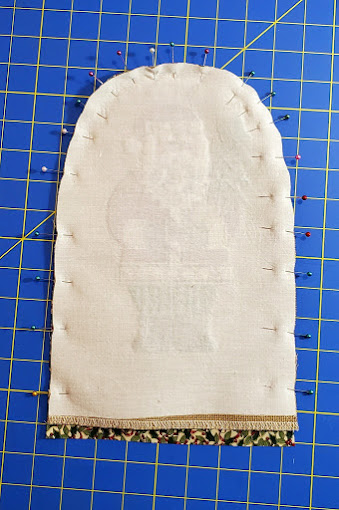 The front and back pieces were stitched together using my sewing machine with regular sewing thread and a 1/4 inch seam allowance. I sewed from the top of the figure down to the bottom edge on one side, then flipped the piece over and sewed that side from the top down. After pressing the seam, I clipped the curves before turning the piece right side out. 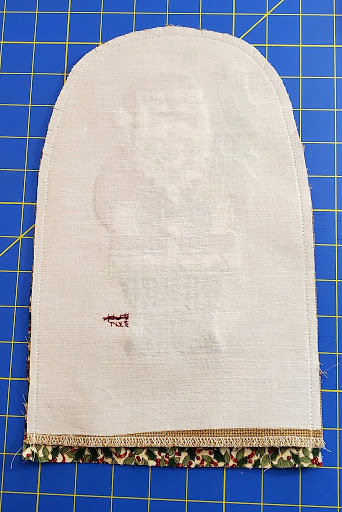 The piece was turned right side out and the side seam was pressed carefully to the back. 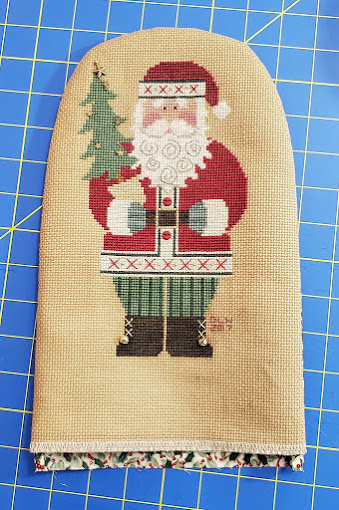 The bottom edge was turned under about 1 inch below Nick's boots and basted by hand to hold it in place while stuffing the figure. 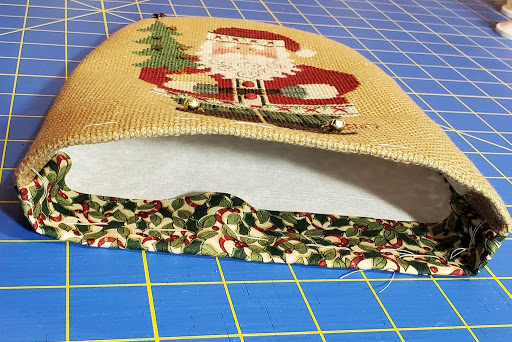 The figure was stuffed firmly with Poly-fil premium polyester fiberfill. When it was about 80% stuffed, I checked the size of the bottom base pattern piece to be sure it would fit. 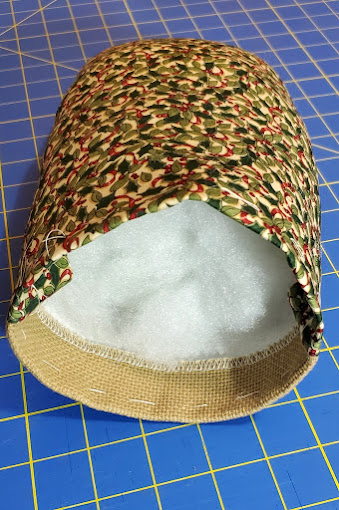 I used the pattern piece in the kit instructions to cut the bottom base piece out of stiff cardboard with craft scissors, then I cut the bottom fabric slightly larger than the cardboard.
When I cut the backing fabric earlier, I neglected to leave enough at either end to cover the bottom piece, so I had to stitch two scraps together to get a large enough piece. The seam runs lengthwise along the center of the base. 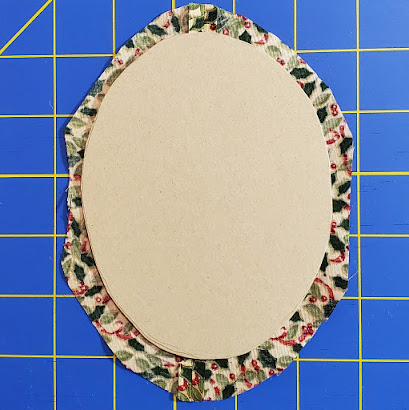 The fabric edges were glued to the back side of the cardboard. 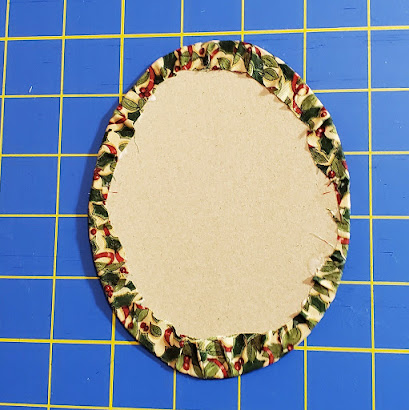 I finished stuffing the figure with Poly-fil to the very bottom, until I couldn't add any more stuffing. 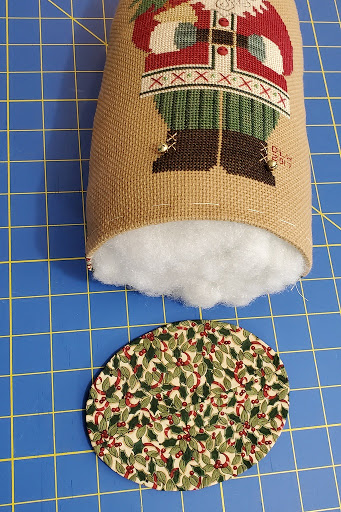 The bottom base piece was hand stitched to the figure almost invisibly, using the ladder stitch and regular thread, leaving an opening at the side seam. 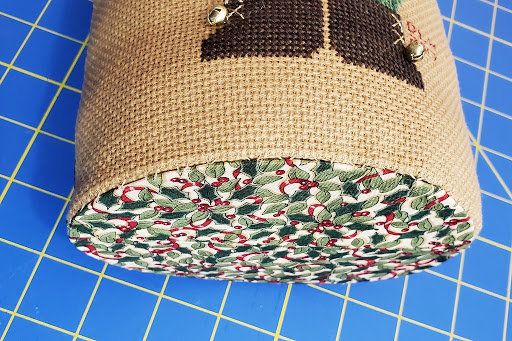 I wanted to make twisted cord in red and green using cotton embroidery floss, but I didn't have enough skeins in my collection to make the length of cord needed. So I set Needle Nick aside and worked on the other stand up figures for the next two weeks.
I didn't want to make more than one shopping trip for floss, so I waited until the other figures were almost finished. When I did finally get to Michaels, they had most of the floss colors I wanted for all 6 stand up figures, but I wasn't able to find them all. Fortunately, I was able to get enough red and green floss for Nick.
When I was finally able to get back to work on Nick, I made a little over 36 inches of two color cord, then pinned it in place to measure the exact length needed. 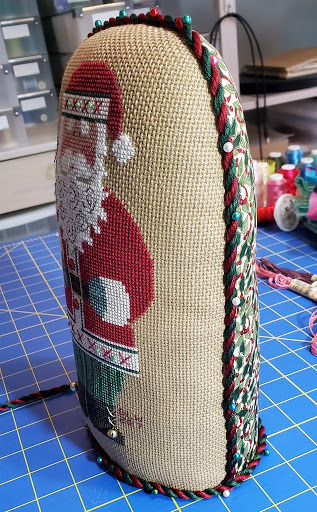 Before cutting off the excess cord, I saturated about 1 inch with glue and let it dry completely. 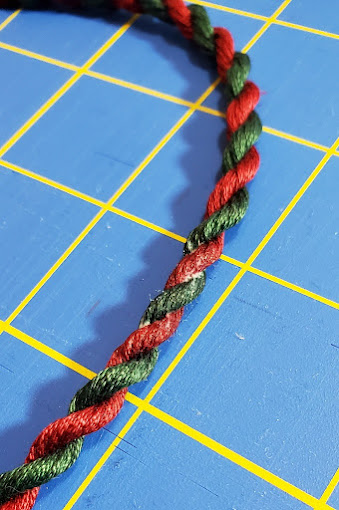 One end of the cord was tucked into the opening at the side seam. I used matching thread to sew the cord to the figure by hand, traveling over the side seam from one bottom edge, up and over the top to the other side, then around the base. 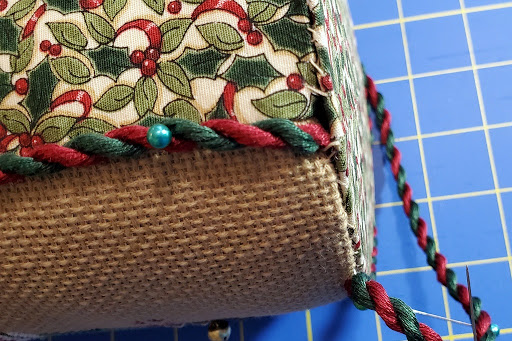 I could have used glue to attach the cord, but I felt the end result was more precise with needle and thread.
After the cord was attached, I set Nick aside again for a couple of weeks while I worked on the other stand ups. The final embellishments were added in mid-August.
Nick's basket and greenery were included in the kit, but I replaced the greenery with my own and added some mini pine cones and a tiny gift box. The scissor charm was also included in the kit. I attached the basket to the figure with some hand stitching and glue. 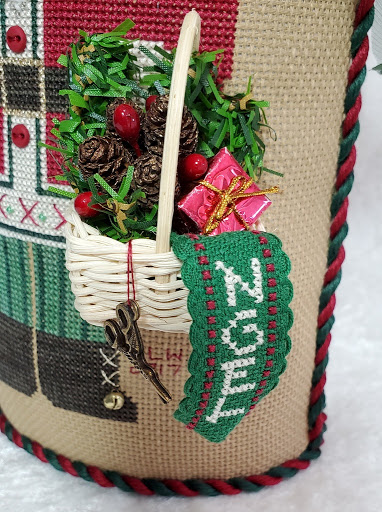 I worked on Joe and Sally Snow after Needle Nick was almost complete, while I was waiting to buy embroidery floss for the twisted cord. There are slight differences in the way I put them together, so they will have their own step by step post.
Note:  Needle Nick was a retired design, but according to the Lizzie*Kate Blog, Needle Nick and Flossie Claus are Back and available for purchase. The kits have been updated with new fabrics and embellishments as of November 2019.
Recap of supplies used in this project:
More in-progress photos can be found in my Google photo album, Stand Up Figure Finishing for Counted Cross Stitch
Labels: Holidays Needlework Tutorials and How-to's