Winston the Westie is the last remaining unfinished project that I included in my Needlework Finishes catching up post in July. He's adorable and I'm so happy he's finally finished! 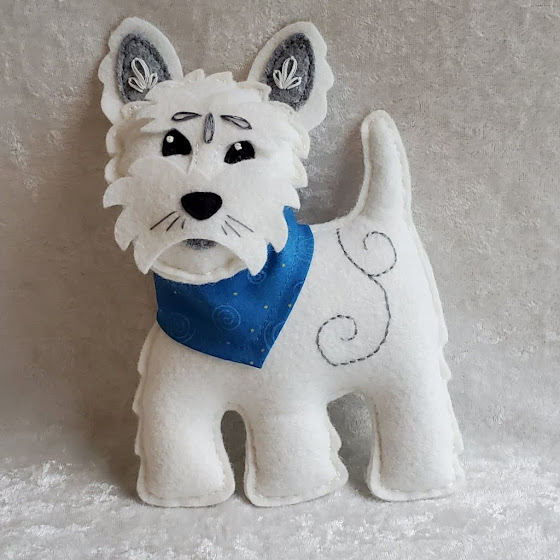 This PDF pattern was purchased from Squishy-Cute Designs on Etsy in September 2017 and I started working on it a few months later. I don't remember how I originally found this pattern - it was probably while browsing Etsy for Westie ideas for my shop.
I just had to have the pattern for Winston because just about a year earlier, in October 2016, I bought this Westie Christmas ornament at Michaels. I remember thinking it was cute, but way overdone with the glitz and glitter. I was sure I could use it as a model to make my own felt Westie ornament - and then I found Winston. 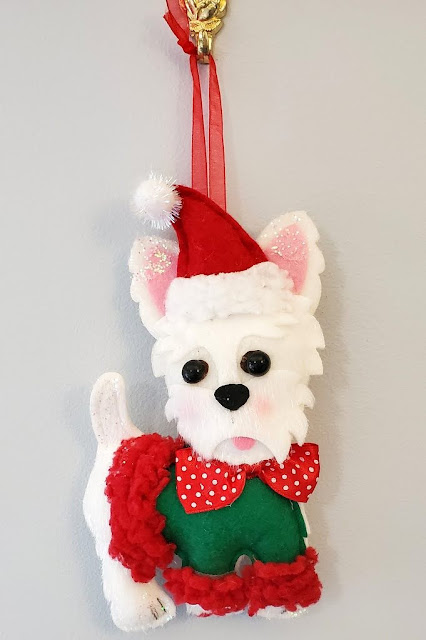 The Christmas ornament Westie is made of furry felt sprayed with glitter, has button eyes and appears to be machine sewn. It's also facing the opposite direction and is a couple inches smaller than Winston, but otherwise they are very similar in design.
Winston is made using wool-blend felt I had in my stash, purchased from JoAnn Fabrics. I cut the felt pieces in December 2017 using my Brother ScanNCut machine. It was my second cutting project after I unboxed the ScanNCut and my first attempt at cutting fabric. I remember crossing my fingers while the blade cut out the pieces and was very pleased with the result. 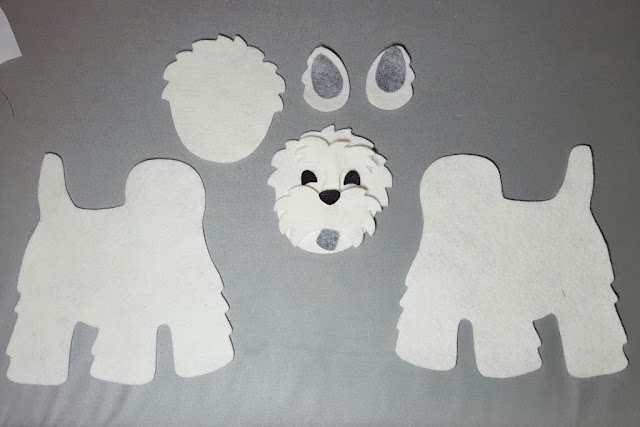 The PDF instructions are very detailed and include clear photos for each step. The pattern features several surface embroidery stitches using cotton embroidery floss on the felt head and body of the dog, including backstitch, lazy daisies, french knots and double running stitches. I used different color grays than were called for in the instructions, to better match my gray felt and to use what I had on hand.
In December 2017, I started backstitching the swirls on the dog's body. I had taken Winston with me to work on while I waited in a doctor's office for several hours. The lighting wasn't very good, so after I finished the swirls, I packed him up to work on later.
Flash forward to 2020: Having finished the flatfold easels, stand up figures and latch hook rug, Winston was the last in-progress project left on my list from July's catch-up post, so I thought I'd finish August on a positive note with yet another UFO completed.
I started working on Winston again on Tuesday, August 25, beginning with the lazy daisies on his ears, then his face and head. His body was completed and stuffed by Friday night, August 28.
Several pieces of the head and face are sewn together using a double running stitch; it's still hard for me to see those small stitches, especially since the colors blend in, so my hand stitching is a bit uneven and wonky in some spots. But finished is better than perfect, right?
Here's a close up view of his face and most of the embroidery stitches. I spent a lot of time trying to get the lazy daisies and french knots correctly executed and in the right positions. 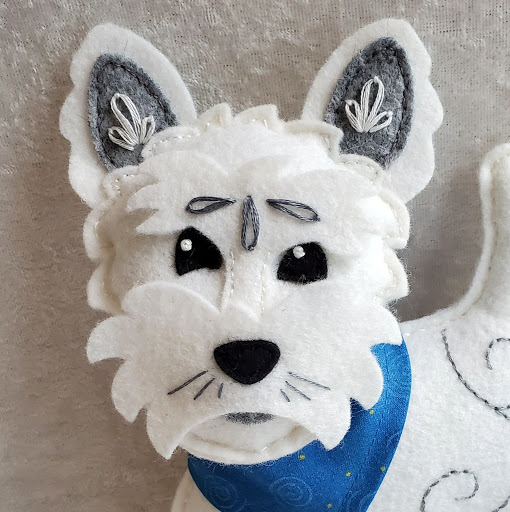 Instructions also include a simple tie-on bandana made in cotton fabric. I liked the way he looked in blue in the pattern photo so I chose blue fabric with swirls on it for my bandana. I used my sewing machine to stitch the hems.
He's quite charming, isn't he? Winston stands about 8 inches tall and 5.5 inches wide. He doesn't actually stand up on his own, he needs to be propped up against something. 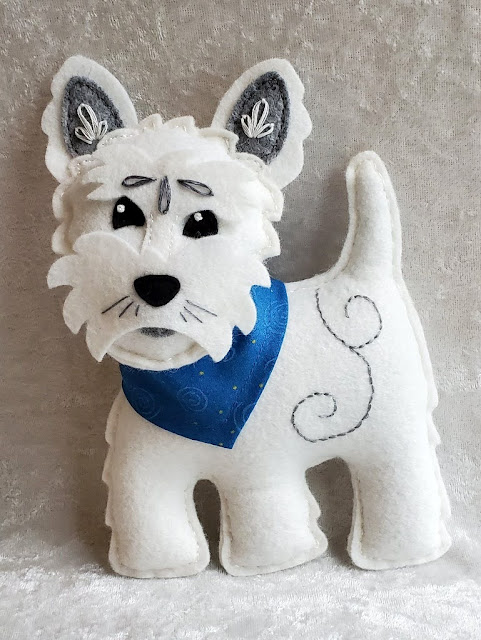 The bandana construction is quite simple, so I could make more bandanas and dress him up seasonally if I really wanted to...
Here's a look at his back: 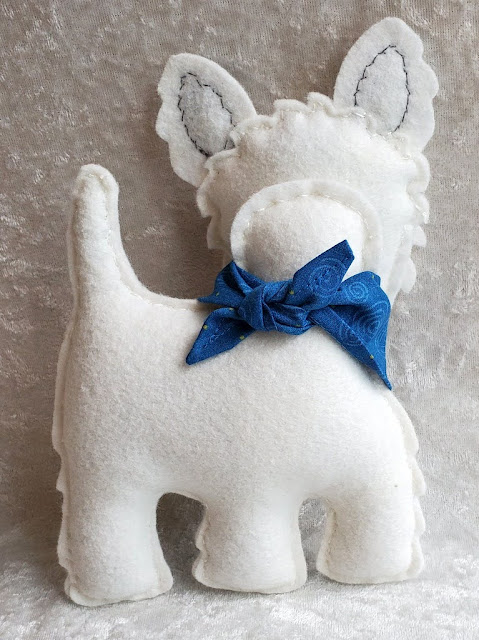