It's been 3 years since I posted my last update on my 10th Blogoversary in 2017. Once again, life got in the way of my personal sewing and blogging. At the time I wrote that post, I had every intention of resuming my blog.
What happened this time? Well, I ended up spending a lot of time trying to re-start my SewAmazin business, updating websites, making inventory and working on custom orders. At the same time, I was still trying to recover from my surgery and treatments related to my breast cancer *and* attempting to get my house and garden back in order (both had been neglected for several years while I was unable to take care of them). Add in two senior dogs requiring my attention and my poor little blog had to fall to the bottom of my priority list once again.
In 2018, Keli turned 16 and started to have more health problems. She was doing fairly well through the summer, then her health began to decline until she eventually left us for the Rainbow Bridge in late October. Losing her was devastating and I lost all interest in sewing or making anything - I couldn't even walk into my sewing room without crying. I decided to wind down my SewAmazin business and close my shops indefinitely, now permanently. Eventually, I worked on a handful needlework projects that have been in my stash for years, including several Westie pieces. 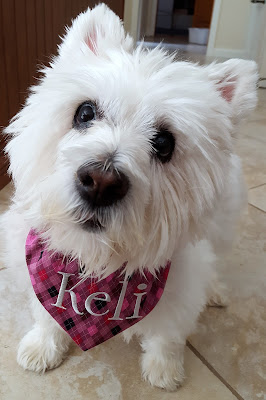 Beginning in December 2018, I did a lot of editing to this blog's photos. Most of my early blog posts contained photos I had uploaded to Flickr. In 2018, Flickr was acquired by another company and later changed it's policy on free accounts. I had to drastically reduce the number of photos I stored there while uploading them to my Google photos account and adding them back to the proper blog posts. I managed to finish that task before the March 2019 deadline.
In January 2019, Penny began having liver problems and eventually was diagnosed in June 2019 with copper storage disease. We treated her for that with medications and special a home cooked diet and we were fairly successful at getting her liver values close to normal again. Unfortunately, in late January 2020 she began having problems swallowing, choked on solid food and started losing weight and muscle mass. After x-rays and ultrasounds, we consulted an internal medicine specialist. Ultimately she was diagnosed with a probable lesion on her brain stem, affecting the nerves in her face. She is losing the ability to close her jaw and control her tongue. We opted to bring her home and keep her comfortable for as long as possible. She's still with us, taking a therapeutic dose of Prednisone, which seems to be slowing down the progression of her disease. It also stimulates her appetite so she has stabilized her weight at about 15 pounds (down from 20 a year ago). We don't know how much time she has left with us, but she's still eating (fed by hand), drinking, going out and barking at birds and squirrels and enjoying life. 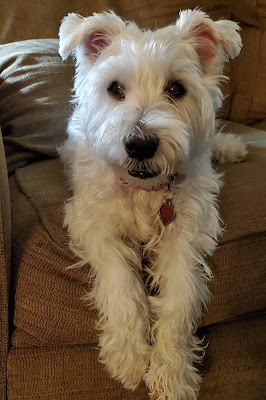 I don't think I have to explain how life changed for everyone in 2020 due to the coronavirus shut down in March. We had just gotten the sad news about Penny's condition and were coming to terms with it's eventual resolution, when everything began to be shut down just a week later. Quarantine didn't bother me too much at first, since I'd rarely had a chance to go anywhere for months other than church, grocery shopping or doctor/vet appointments - I was just too exhausted to go anywhere else. To be honest, I never really felt like I recovered from my BC treatment and have been surviving one day/week at a time since 2016.
Around the first weekend in April I started having problems with my vision, but because of the shut down, I didn't follow up for a few days, until I started having symptoms that resembled a detached retina. An emergency visit to the ophthalmologist sent me to a retina specialist who, after several hours of tests, referred me back to my oncologist for a full metastatic workup.
Within a day I was scheduled for MRI's, CT scans and a multitude of other tests over the next 3+ weeks. I was diagnosed with metastatic breast cancer, the same type as my previous diagnosis in 2015. I began radiation treatment to my brain immediately to address my vision. When that course was complete, I started drug therapy, which I will need for the rest of my life, however long that may be. I recently completed a round of radiation to my right leg, which has been very painful and has prevented me from walking normally for over a year. Both my vision and my leg are improving slowly, but I am still experiencing fatigue from my treatments.
Needless to say, I haven't been doing much sewing lately. Well, I did manage to sew face masks for myself and my husband before my vision got too bad. I have also been able to do some simple painting projects that are not too detailed.
I started painting last year for fun, as therapy after losing Keli, and as an escape from worrying about Penny's diagnosis and struggling with my own physical difficulties. I was inspired by Plaid's Flowers of the Month series featuring Donna Dewberry's One Stroke method. Ever since I went to the paint your pet party in 2013, I've wanted to try again because I didn't really have enough time to finish the original and was never happy with it. The flowers of the month seemed like a good opportunity to get some practice before diving in. Since then I've also purchased Plaid's Studio Lessons and followed their weekly Lunch 'n Learn lessons on Facebook.
So that's what happened to stop me from blogging since 2017. I've kept my list of finished projects updated each year, sometimes linked to photos. Around November of last year, I started drafting some catch-up blog posts covering the past 5+ years, consisting of mostly photos and a few notes that I remember about each project. I intended to add detailed posts about selected projects and I was making good progress on my drafts until Penny and I started having problems again...
Anyway - I was recently reminded of this Blogoversary by a calendar alert and thought this might be a good time to revisit those catch-up posts. My vision is improved enough that I can see to type (with frequent breaks) so I will make the attempt to finish and post them this summer. But don't be surprised if I get interrupted again.....
Labels: Blog News Westies