June 18, 2007
This is the third entry in the series -- I'm catching up on a month's worth of projects and reports.

About a month I ago I received the upgrade disk for my 4D Professional Embroidery Software. I've owned the 3D software for just under a year and have been attending monthly classes to learn how to edit, modify and combine machine embroidery designs and am getting my feet wet at digitizing. I joined the group, lead by Miss Monica, The Embroidery Professor, earlier this year. I was just starting to understand the basic concepts of digitizing, when this new upgrade came out.

Why did I need to have this software? Well, as usual, it started out with westies . . . I wanted to create westie embroideries 'cuz the designs available were nice, but they didn't look like my westie. And, when I first bought the package, I thought it would be as easy as scanning a picture and converting it to an embroidery file, so that the software did all the work. I quickly learned that it would take much more than simply scanning an image to create satisfactory results.

When I finally received my 3D Professional package in July/August 2006 (I'd purchased it in May) I had forgotten about making westie embroideries and instead I was eagerly looking forward to digitizing faces for a group of minkee hankie blankie pets. This is a kit which contained the instructions and fabric for 3 small blankets made from soft minkee fabric; each blanket has a stuffed animal head and paws at one corner. There are 3 different animal faces - puppy, kitty and teddy - and the instructions suggest that the faces can be stitched by hand or easily digitized for machine embroidery. I could have very easily stitched the faces by hand since I've been doing hand needlework for years, but since I had this new great software, why not use it?

At the time I purchased this kit in June, I had 3 pregnant sisters-in-law expecting to deliver in July. By the time I got my software, I had 2 new nieces and 1 new nephew, and 3 overdue hankie blankies. So I stumbled through the practice exercises and picked up just enough information to create faces that were OK, but not very professional-looking. Early this year, two more nephews arrived but have not received their hankie blankies because I didn't like those first faces. Ever since, I've been trying to re-digitize them, starting with the puppy.

Here's a sample stitch-out of my first digitizing attempt, in 2006: 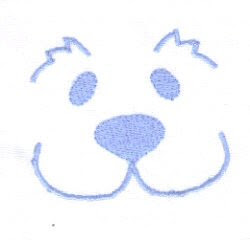 This didn't look too bad stitched on minkee fabric, but I don't like the uneven bumpy stitches in the mouth area and the eyebrow stitches look "lumpy" to me. I want the mouth to be a smooth curve of even satin stitches of consistent width and density and the eyebrows should be properly arched.

I actually made some progress back in March . . . after class, I was inspired to try to create the puppy's face by using shapes built in to the digitizing module. I successfully created the eyes, nose and an acceptable mouth, using filled ovals and outlines of circles. But, I kept getting hung up on the eyebrows, which are supposed to be sharply arched . . . mine kept turning out rounded. In April's class, I learned I could make curved columns, so I thought maybe I could use a series of overlapping curved columns to make the eyebrows, but I still didn't like the results. In May's class, Miss Monica showed us the 4D Sketch module -- it allows the user to draw stitches for an embroidery design, using free-motion, quilt-motion or zigzag stitches (and probably more that I'm not remembering right now). I've decided I am going to try to make the eyebrows using 4D Sketch and draw them using short zigzag stitches, so that they will look like satin stitching on the minkee fabric. Hopefully this will work and I will finally have an acceptable puppy face - then I can recreate the teddy and kitty faces.

As much as I want to play with the design software, it seems as though some other sewing project always takes priority. I don't know when I'll ever get this puppy face to look right, but I'm going to keep trying. I've just discovered that a multi-format CD of these faces is available; but since I've already invested my time in this project, I'll keep plugging along.

I have been trying to experiment with the new features in the 4D software . . . and there are several new design wizards which should make creating simple designs quite easy (as compared to using 3D). I have had time to go through one of the practice exercises and so far I can say I like the upgrade, and will likely use it more and more. I used several of the new features when creating the "red socks" bib, shown in my previous blog entry.

And maybe I'll even get around to digitizing a westie embroidery that looks like Keli one of these days . . .