Our solar water heater was installed this week and has now been operating for 48 hours!

The solar panels were installed on the roof weeks ago, and we were just waiting for our contractors (who we like to call "our solar guys") to be available to install the tank, pipes and everything else that goes with the unit. On Monday, they installed the new tank; Thursday morning they were charging the system and by 9am we were heating water. The only remaining step is to have the town inspector come take a look and approve the system.

The way this system works is that we have one big tank that "pre-heats" the water by way of solar energy: there are 2 new solar panels on our roof dedicated solely to heating hot water. A type of "anti-freeze" circulates through pipes which run between the solar panels and the water heater, transferring the heat from the panels to the water. The pre-heated water feeds into our conventional, gas-operated water heater. Since the water is already hot, there shouldn't be too much of a need to burn natural gas. And if we experience too many cloudy days, we still have the old method of making hot water available.

We had a similar set-up previously, except that both tanks operated on gas. Just over a year ago, the pre-heater" tank failed, and we replaced it, without even remembering the solar option. Duh! It was when we had a problem with one of the inverters for our photovoltaic system and our "solar guy" Ethan was trying to diagnose what was wrong with it that it dawned on us that we had missed the opportunity to add the solar heated water tank. We asked him to take a look at our system and draw up a plan and estimate. We had just enough room on the roof to add the extra panels and our existing water heater was in a good location. So we decided to forge ahead.

Wait, did I say we had a problem with our photovoltaic whatchamacallit? First, what I'm referring to is our solar electric system, which Ethan installed in late 2005. I've recently learned to distinguish between the solar electric (photovoltaic) and the solar water heat. I hope I've got my terminology straight. And it wasn't really a problem . . . one of the inverters failed, it was under warranty and it was replaced. The failure occurred during the winter when we weren't able to generate too much power anyway, and it was fixed well before summer when we run the air conditioners and use the most electric power.

Back to the water heater -- there is the coolest monitor on the side of the new tank which indicates the temperature of the roof, at the bottom of the tank and at the top of the tank. When there is enough of a difference in the roof and tank temperatures, the pump is activated and the anti-freeze circulates, which looks like a little animation on the monitor. So guess how many times a day I'm in the basement checking out the temperatures! I've even been inspired to do my hot water laundry, just to see how it affects the water temperature. And I hate to do laundry. But I'm running a load right now. :-)


If you live in or near New Jersey, you can read this article (March 2007) from The Bergen Record for more info on green power in northern New Jersey or go to our solar guys' websites:

Here are some photos of our solar electric and water heater systems:

Note: these are located on the backyard side of the house; nothing is visible from the street!

View of the entire roof: 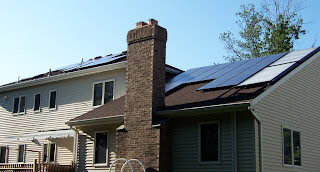 The "upper roof" (electric only): 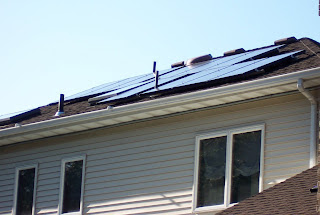 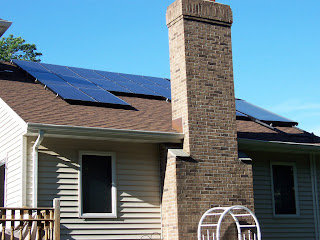 View of the water heater panels (on the right) & pvc pipes conceal the pipes for the "anti-freeze": 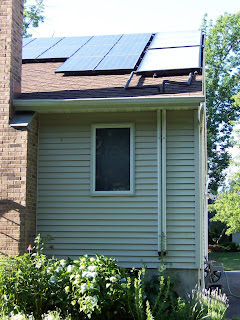 The tanks in the basement (solar heated tank on the right): 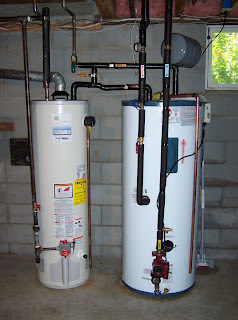 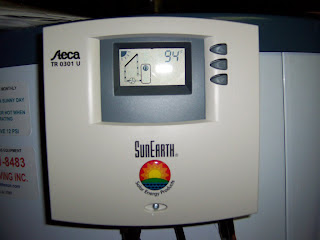 Check out this Slideshow: