This is another post in the series catching up on 2012 projects!


First, a little bit of a flashback: 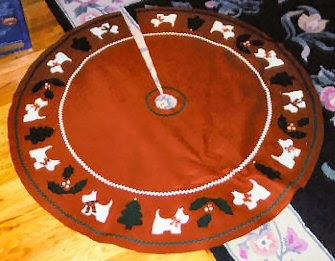 I don't remember the original fiber inspiration for this felt tree skirt, made sometime around 1998 when Wyndi, our first Westie girl, was still with us. I also can't remember which came first, the Westie Christmas tree or the tree skirt! The pattern for the little white terriers is from a Scottie Shortbread recipe in a Leisure Arts pamphlet and the holly and tree shapes came from one of the 1990's Leisure Arts magazines that showed them as fused appliques on sweatshirts.

This tree skirt was an almost no-sew project: I glued the felt Westies, bought pre-made ribbons from a craft store and glued them onto each terrier, glued buttons and rick rack and only hand sewed the small jingle bells on the trees. The edges were all trimmed with pinking shears.

My Westie tree skirt has help up pretty well, but some of the glued pieces have come off after 10+ years of use and I've been undecided whether to make a totally new tree skirt or stitch the loose pieces back on....


Late last summer, a Facebook friend happened to find the online photo of my Westie Christmas tree skirt and asked if I could be persuaded to make one for her. I agreed, but put off working on it until after the Adorno Country Fair in October.

I was juggling a few other projects in late October and had gathered all the supplies for the tree skirt, planning to work on it just before Halloween. And then Hurricane Sandy happened and left us without power for 5 days. Luckily, we didn't have any major damage, and as soon as we were back to normal with power and household needs, I got to work on the Christmas tree skirt. 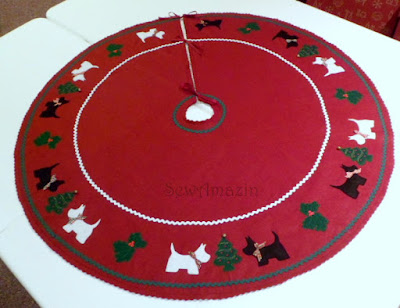 I didn't think to take photos along the way, so I can only describe in words how to make this tree skirt. The photos shown below were all taken after the skirt was complete and if the colors in some of them look weird it's because red gives me fits when I try to photograph it! I used premium craft felt for the skirt and all the shapes.

Step 1: Using a disappearing ink pen, I traced circles for cutting the outer edges, center hole and placement of the rick rack. To create the circles, I made an impromptu compass by sticking a thumb tack through an old measuring tape into the center of the felt (with a scrap piece of mat board underneath to hold the tack and protect my table). Then slipped the tip of the pen through the eyelet hole at the end of the measuring tape to trace the circles.

Step 2: I glued the rick rack along the marked lines with Aleene's glue and let it dry completely.

Step 3: While the glue dried, I cut the felt applique shapes.
Step 4: The felt applique pieces were arranged around the felt skirt until I was pleased with the design, then I marked the placement for each with either pins, disappearing ink or chalk marker.

Step 5: Machine embroidered the Christmas trees and holly and berry embroidery designs. I hooped medium weight tearaway stabilizer and used temporary adhesive spray and a few pins to keep the felt skirt on the hoop, then embroidered with rayon embroidery thread. 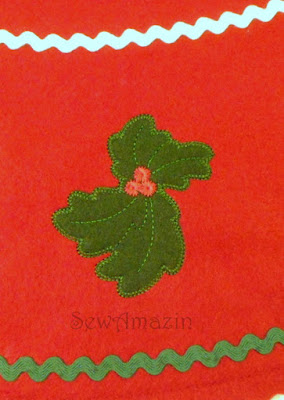 Step 6: Using the sewing machine and a blanket stitch, I appliqued the terriers in matching rayon embroidery thread in the needle and regular sewing thread in the bobbin. 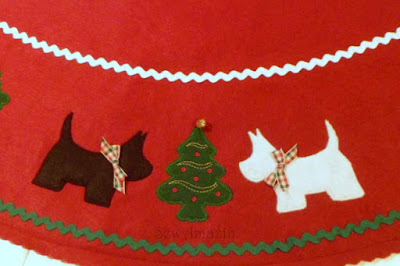 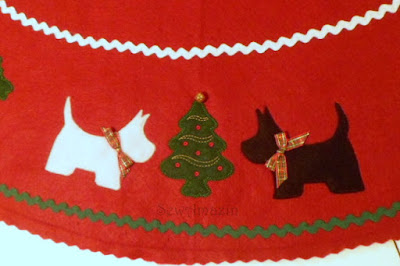 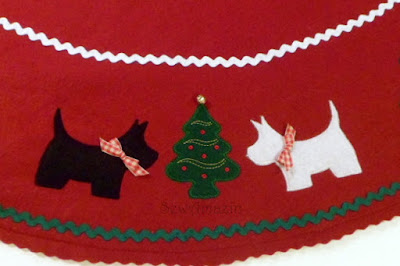 Step 8: I added a backing piece of felt to hide the back of the embroidery and sewing. Using the dual feed foot, I sewed a straight stitch along all edges, and sandwiched grosgrain ribbon ties along the opening to keep the skirt closed

Step 9: For the final finishing step, I cut around the edge with a scalloped rotary cutter to give it a nice wavy edge. I like the way it repeats the look of the rick rack. 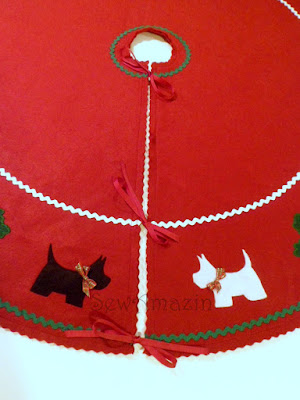 Overall I was very pleased with the finished Christmas tree skirt! I'm not sure I'd have time to make more for my shop, but if I do, the overall design will have to have fewer terriers. And the backing will probably be a cotton fabric print so the skirt isn't quite as bulky. And probably a few other changes ...