I've been trying to decide the best way to share all the Christmas gifts I worked on in December and keep the blog postings from getting too long and photo-heavy. So I've decided to write a series of entries over the next week or so, grouping a couple of projects into each post. Including the previous Christmas entry, this is the second installment in the series.


*****
Christmas Fingertip Towels: I needed an inexpensive grab bag gift for a family party early in December, and couldn't find anything I liked in the local shopping center. I was tempted to buy decorated holiday kitchen or bath towels, but the quality of both the towels and the embroidery were inferior (in my opinion). Instead of buying the cheap stuff, I used a couple of coupons and purchased two sets of REAL fingertip towels and embroidered them myself. 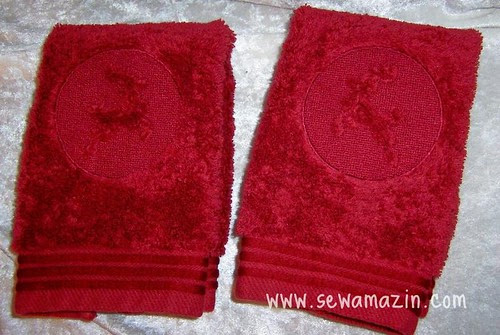 For the first pair of towels, I stitched an Embossed Reindeer design from Embroidery Library (the design is part of a pack called Christmas Whimsy Embossed - Small; I did not buy the entire pack, just a few of the individual designs.) I used RA rayon embroidery thread that almost perfectly matched the towel color for both the needle and bobbin and mirror imaged the design on each towel.

Because the embroidery thread was such a close match, it's a little difficult to make out in my photo - I've tried to enhance it as much as possible. The towels looked really impressive in person.

The embossed embroidery technique is really starting to grow on me. I know it's been around for a while, but I didn't try stitching any embossed designs until I did the Halloween fingertip towels a few months ago. I really like the effect created when using contrasting threads as well as when matching the thread to the fabric. (More embossed designs are below.) 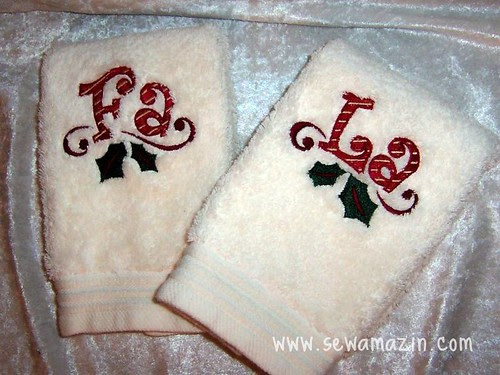 I liked the reindeer so much that I wasn't sure I could part with them, so I stitched up a second set of towels using the Holiday Fa and Holiday La designs (also from Embroidery Library).
Both sets of towels were purchased at Bed, Bath & Beyond; they are from the Palais Royal Hotel collection of towels and are nice and thick.
Eventually I decided to gift the red reindeer towels for the grab bag and kept the Fa and La for my powder room. When someone asks "where are the other La's", I tell them they're silent.

Embossed Scarves: The embossed designs made quite an impression on me and I was inspired to try the technique again, but this time I stitched snowflakes on fleece scarves for a couple of my nieces. The purple scarf is a slightly fuzzier fleece than average; the red fleece is very thick and plush, and I added a quick matching hat.

Both scarves were cut twice as wide as desired, from selvage to selvage. Example: for a 6" finished width, cut 13" high by the full width of the fabric, in this case about 58-60" across. Then, using a dual feed foot, they were machine sewed with about a half-inch seam along the long edges. I left the short ends un-finished. Quick and easy! 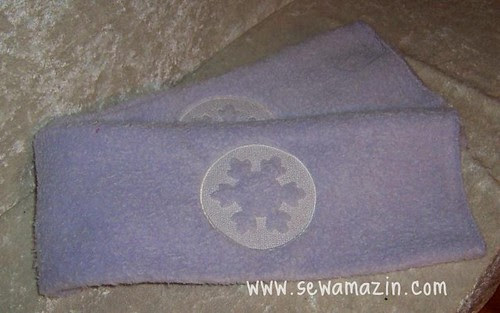 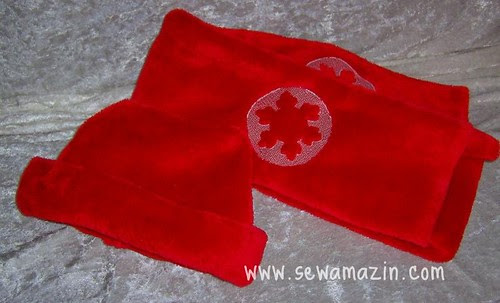 For the embossed embroidery I used RA snow white rayon thread in the needle and bobbin, hooped water soluble sticky stabilizer and centered the scarf in the hoop. I used blue painter's tape on the fleece to mark the center of the design to help get it lined up correctly. After the hoop was attached to my machine, I added a layer of Solvy to the top. To keep it in place, I first sprayed it with temporary adhesive spray, then used the Fix function to baste everything together prior to stitching out the embroidery design.

They turned out very nice, if I do say so myself. I did have a few issues with thread breaking, but when I switched to a new and larger embroidery needle, that problem resolved itself. I can see more embossed snowflakes in my future (which I prefer to ACTUAL snowflakes). 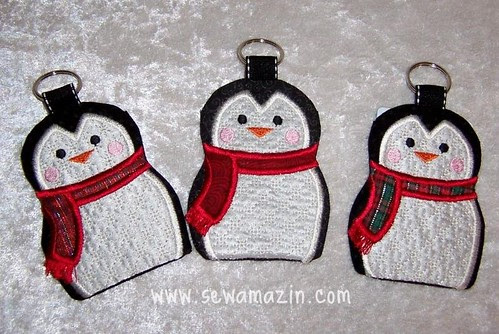 Penguin Gift Card Holders: In my previous Christmas post, I showed the first few batches I made of these little cuties. The machine embroidery design is from Embroidery Garden and they are made completely (and very cleverly) in the hoop.
When the time came to start assigning them to gift card recipients, I found I needed 3 more for the flock. This trio was made for some of the young boys on my list. The scarves were each stitched with the same red thread but I used a variety of scraps of Christmas-y cotton fabrics. They were a big hit.
*****
Wondering about the status of my Burda Coat? The pieces are all cut out (except for the lining). I had to put this project aside at Thanksgiving and haven't had a chance to get back to it. The plan is to get it done by the end of January. But that could change ...
Labels: Garments/Wearables Holidays Housewares and Towels Machine Embroidery