This is the final installment in the series of blog entries about Christmas projects I worked on in December.


In early November, I read about The Green Grocery Bag Challenge, a project to encourage sewists to wrap their holiday gifts in reusable cloth grocery bags, thus reducing the amount of wrapping paper entering the waste stream. (Read the wrap-up post over at Sew, Mama, Sew!)

This idea appealed to me; for several years I've been trying to wrap gifts in alternatives to paper, boxes and bags. One year my nieces' and nephews' gifts were wrapped in pillowcases. Unfortunately, I didn't actually participate in the Challenge, since I didn't get around to making my gift bags until a few days before Christmas. I was on a deadline, working down to the last minute and to be honest, I forgot about it.

Instead of grocery bags, I made decorated felt gift bags for everyone on my Christmas list. Each bag was made of craft felt from my stash.  They are basic tote bags with boxed corners and matching handles, similar in size to most paper gift bags.  Except for the first sample bag, all the embroidery was done before each bag was assembled. While one design was being embroidered, I stitched up the side seams of another bag using my serger. The handles were all sewn and attached at the end, assembly line style on the sewing machine. Ribbons, buttons and other embellishments were added to each bag.

Each recipient was challenged to do one of the following with their bag:

First is a purple felt bag embroidered with a large Silly Rudy applique design from Five Star Fonts. The reindeer's face and antlers are felt and the shiny red nose is metallic red fabric. I added red sheer metallic ribbon along the top edge with a bow to dress it up for my niece who loves purple: 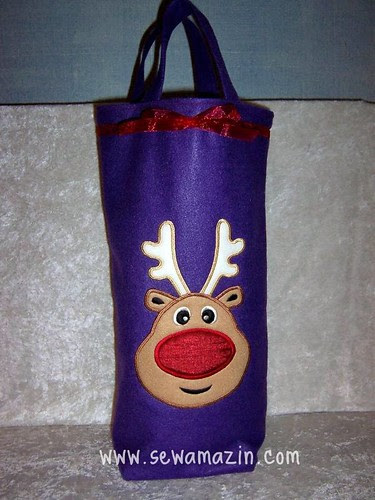 This dark red felt bag is embroidered with a large Whimsy Gift applique, a free design from Five Star Fonts. I added the lettering with one of the built-in fonts on my embroidery machine. The gift applique is shiny metallic red fabric. I added blue sheer metallic ribbon at the top for embellishment: 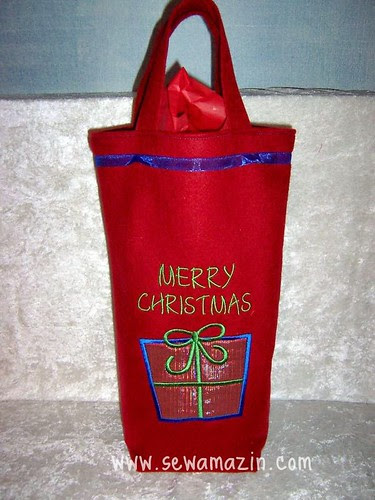 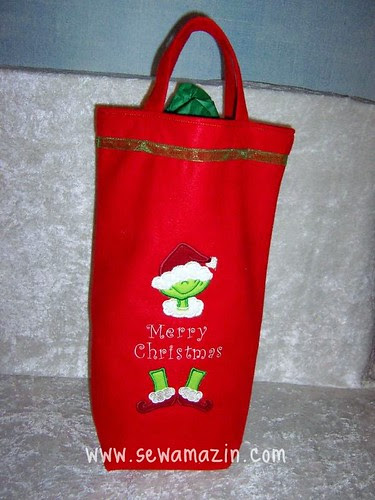 This bag in dark red felt, was inspired by Embroidery Garden's Santa Boots Towel Legs design. I left out the boots and stitched a strip of black felt across the front of the bag for Santa's belt, then embroidered the buckle design: 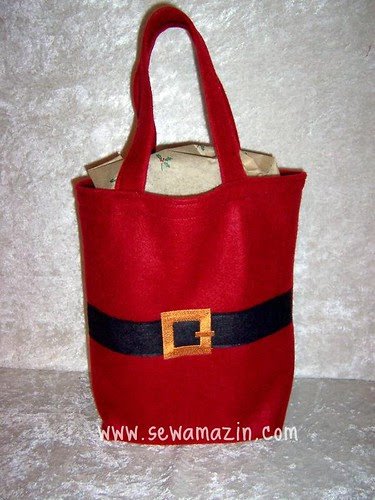 The designs on the next two bags were both freebies from Embroidery Library to their Countdown to Christmas Club members. They are part of a series of "Tangled up in Christmas" designs that includes a Polar Bear, Pup, Kitty, Santa and Mrs. Claus. I selected the Tangled Up in Christmas Penguin and Reindeer for my bags, trimmed with some white ric-rac along the top: 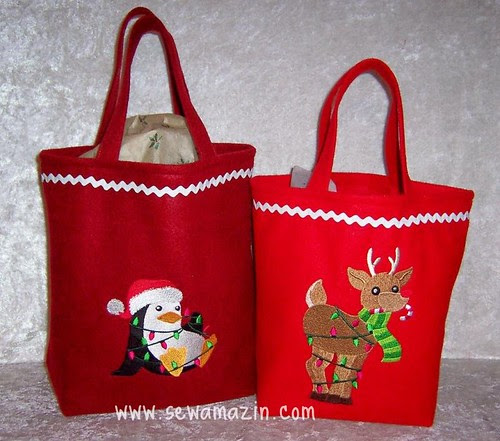 The next bag features a Vintage Tree Trio, another design from Embroidery Library. The applique trees are made of craft felt. I added two decorative buttons: 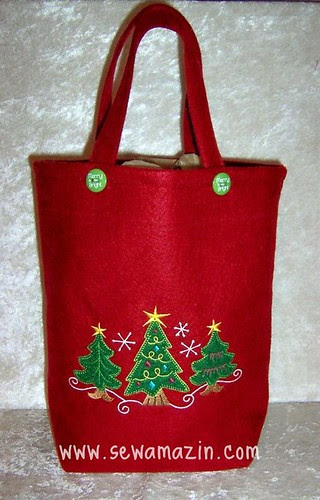 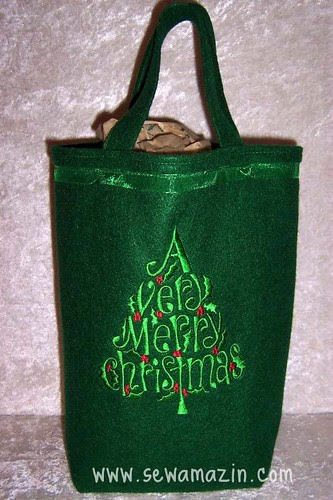 The blue felt bags were my first two sample bags. The bag on the left has a trial stitch-out of Embroidery Garden's Christmas Guy. Using 4D Embroidery software, I tried to enlarge the original design from a 4x4 to a 5x7 size; the sample stitch-out on green craft felt was a test to see whether the re-sized design would stitch correctly. To apply it to the bag, I cut around the design and zigzag stitched it to the front of the bag. The bag on the right with the Christmas Legs design was another experiment where I sewed the bag together so that the seam allowances were on the outside of the bag, then trimmed with a curved rotary cutter: 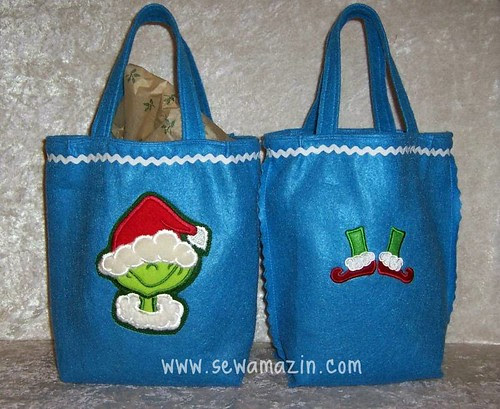 I stitched this Holly Jolly Reindeer vintage-style design from Embroidery Library on tan craft felt as a sample stitchout. Later, it was zigzag stitched onto this bright red felt bag, and two decorative buttons were added for embellishment: 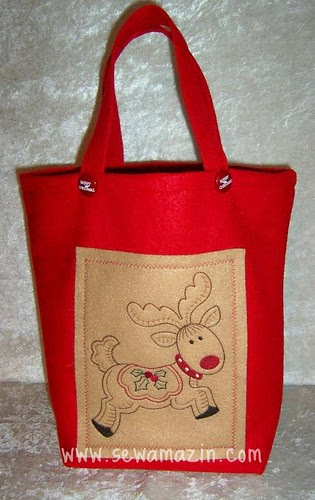 I really liked the way each of the bags turned out, but would have liked to have had more time to add trims, beads and decorative stitching. I'll just have to try to get started earlier for next Christmas!