This is the 3rd installment of a series of blog entries describing my Christmas 2010 projects.

I can't really remember when I first heard about Chalkboard fabric - it might have been in a newsletter or on a sewing blog or fabric website ... but when I spotted a bolt of it in JoAnn Fabrics last summer, I bought 2 yards for my stash, thinking it would be fun to use for Christmas gifts for some of my nieces and nephews. JoAnn calls it 'blackboard fabric'; I refer to it as both chalkboard and blackboard fabric.

Since I couldn't remember where I'd seen the original article, when it came time to sewing with the blackboard fabric, I was at a loss for what to do with it. I tried searching the internet for ideas and found some very interesting projects, but not what I had in mind. Then I searched Flickr -- and found the perfect inspiration for making chalkboard fabric place mats. If you'd like to see the photos that inspired me, they are saved in my Flickr Favorites list.

The boys I wanted to make the place mats for are all fans of Disney's Cars; I'd used up most of the Cars fabrics in my stash on previous projects, so a trip to JoAnn's was in order. I found a new (to me) Cars print on sale and end of the bolt: 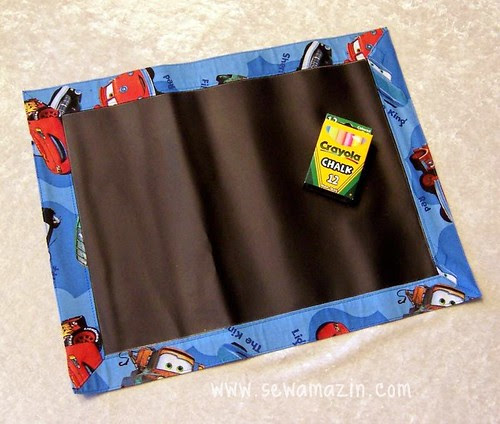 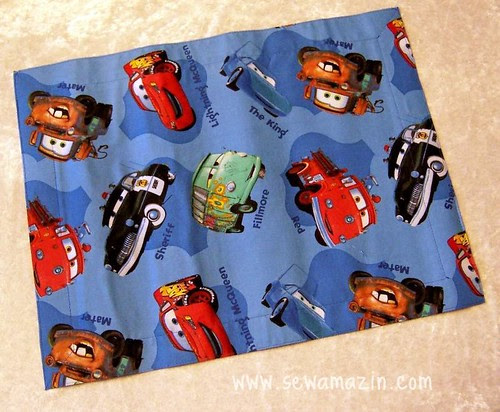 For my niece who loves purple, I had plenty of lavender fabric still in my stash: 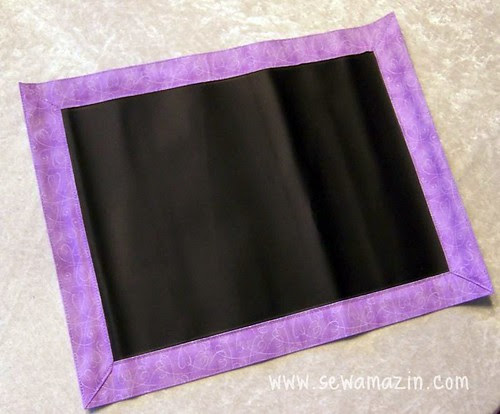 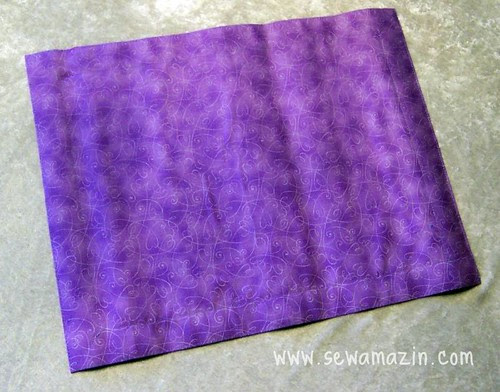 For each place mat, I cut the chalkboard fabric 14x18". Since I made four mats altogether, this used up a full yard, cut into quarters. I cut the background fabrics 2 inches larger on each side, or 18x22". I considered padding the place mats with a thin batting between the layers, but when I tested writing with chalk on the padded fabric, it was much more difficult than writing on the unlined chalkboard fabric.

To make it easier to line up, I used a Chaco chalk marker to mark both 1/2 inch and 2 inches from the cut edge on the wrong side of the backing fabrics. I folded up the edges on the 1/2 inch marked lines and ironed well to make a clean edge hem. Then I centered the chalkboard fabric using the 2 inch marked lines, wrong sides together with the chalkboard facing up. To keep everything from sliding around, I sprayed the backing fabric with temporary adhesive spray before smoothing the pieces together

The last (and easiest) step was the actual sewing -- I used an edge joining foot (which has a guide down the center) and a topstitch needle and a long straight stitch to sew just inside the folded edge of the backing fabric. Then I did the same thing in each mitered corner and around the outer edge of the place mat to finish the edges nicely.

When the place mats were finished, I experimented with ways to roll them up for storage and transporting, and considered several options for attaching some sort of holder for chalk.

In the corner of my sewing room was a sample of a drawstring backpack for kids. Someone had given it to me a while ago, and I'd only kept it to use as raw materials for some future project. 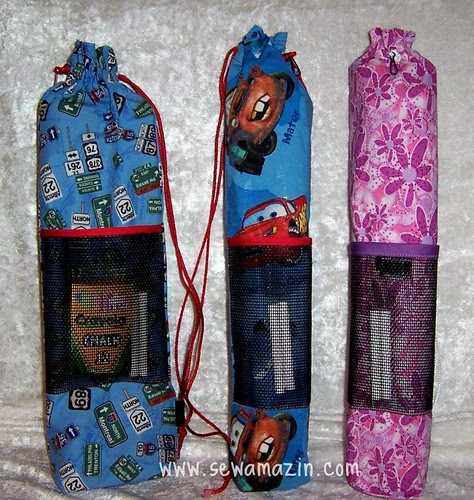 That's when the light bulb moment occurred -- and I used that little sling-backpack as a pattern for constructing these drawstring totes to carry the rolled up chalkboard mats.

I didn't have enough of the Cars fabric for all 3 of the boys, so I substituted some Route 66 fabric for one of them.

Each tote is slightly different; the first one was cut from 2 pieces of fabric (because that's what I had left) so there were two side seams. The others were all made from a single piece of fabric, folded on one long side with one side seam. So I had to pay attention to placement for the pocket and loop for the cording. The bottom of each tote was boxed slightly.

These are fairly simple drawstring bags with a few enhancements. The first tote was difficult to slide the mat in and out, so on the other three I fused Heat 'n Bond vinyl to the wrong side of the fabric before doing any sewing, to make the interior a little slicker. I added fabric screen pockets to the front of each tote for holding chalk and a piece of flannel for erasing. The top of the screen is covered with bias trim and the other three sides were simply zig-zagged in place. There are black velcro closures sewn in to keep the pockets secure. If I were to do this again, I'd probably fold the screening vertically before attaching, to make the pocket more pouch-like. 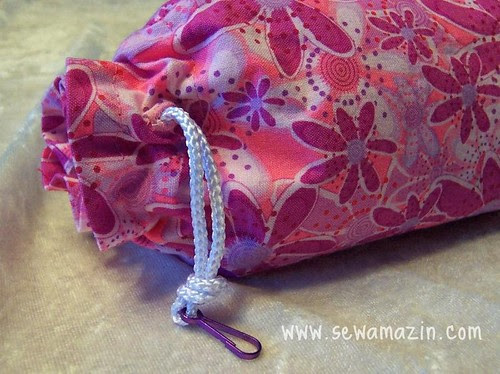 At right is a close-up of the drawstring of one of the totes - I sewed a buttonhole on the front of the tote where the drawstring channel would later be formed. On the others, I used a metal eyelet (see below). 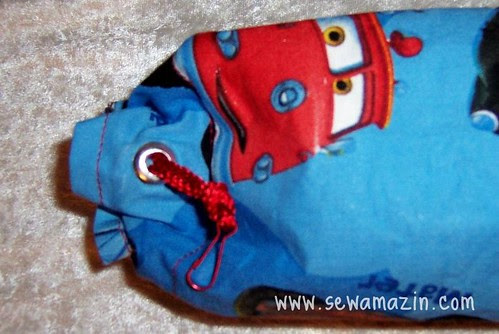 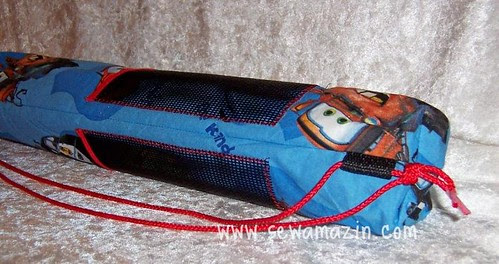 At left is a closer view of the loop and knotted cord for the drawstring.

Finding chalk was another matter. Maybe I just wasn't looking in the right places, but I finally found some at the local Toys 'R Us Express. I included one package of colored chalk and 2 pieces of white chalk for each mat.

I still have a few pieces of white chalk left over and one yard of blackboard fabric -- sooner or later, there will be more mats!

SewAmazin is now on Facebook! Hope you'll visit and Like the new page; you can keep up with all the blog posts there, too.
Labels: Baby and Kid Stuff Cars Sewing