February 09, 2009
At Christmas, Richie D's no-sew fleece pillow sham was very popular with the nephews and nieces, so for Joseph's second birthday, I made one just for him: 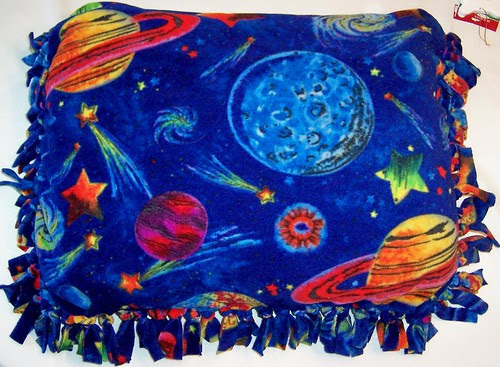 His mom mentioned that she was decorating his bedroom with planets, so I bought the anti-pill fleece and cut it to the same size as the kitted pillow sham. I had another Disney Cars pillow kit, so I put that together also and included it for Joseph's older brother, William, who received a Cars-themed birthday gift from us in 2007. I'm pretty sure they'll be sharing both pillows.

As I mentioned with Ryan's birthday gift, this year I'm trying to keep the kids' birthday gifts simple while using up supplies from my stash. I had one last blue knit shirt sized 3T and if I didn't use it for somebody really soon, it was going to be too small for anyone we know to ever wear it.

Keeping with the cars theme for the boys, I purchased this Cartoon Car design from EmbroideryLibrary to put on the front: 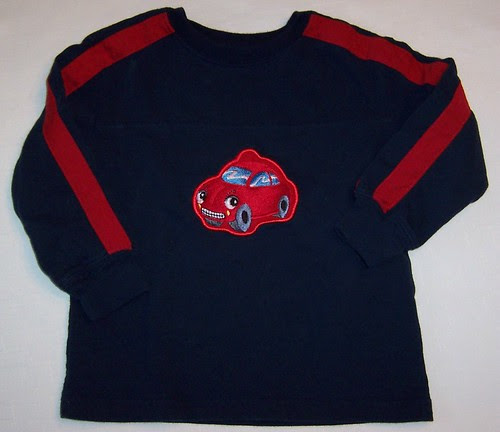 Here's a close-up view of the embroidery: 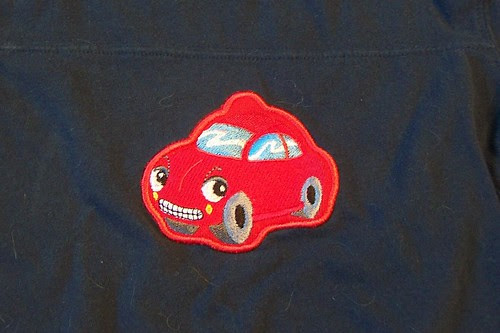 The embroidery design is actually intended to be an in-the-hoop keychain, but I made a few changes in the order of the stitching to turn it into an appliqué. I stitched the main part of the embroidery on a scrap of red sweatshirt fleece, then hooped the shirt separately. Only an outline (for placement), a tackdown stitch and the satin stitch border are stitched on the shirt itself, so that hopefully it won't be itchy on the inside.

We included a gift card with the pillows and shirt so Joseph's mom can help him pick out something he really needs.