This is an update of my ongoing Slipcover project; my previous entry about completing the cushions can be found here.

My sewing area has been relocated to the dining room: 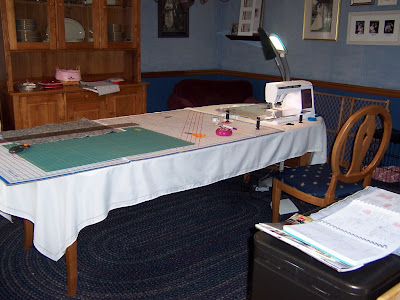 I spent most of the afternoon on Thursday sketching the various sections of the couch and calculating the size of the fabric pieces needed for each, just to make sure I would have enough yardage. This also helped me decide just how to tackle the box pleats without making a separate skirt for the couch. 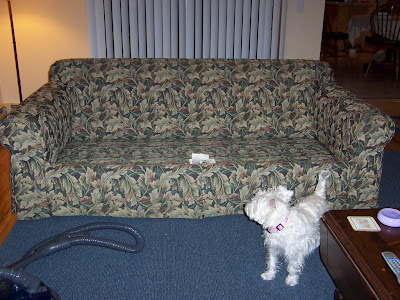 The instructions for making a basic slipcover in my sewing reference assumes the slipcover will be either skirted or faced; my cover is neither. Notice in the center front and on either side of the arm fronts (as well as both back corners), there are what appear to be box pleats. These are not real box pleats; there are a series of "underlays" stapled to the frame in each section and the corresponding "overlays" are simply lined skirt sections.

In trying to recreate the original look of the couch, I've concluded that my new slipcover must be semi-upholstered, in a manner similar to the original upholstery. For weeks I've been trying to come up with a way to make real box pleats without making a separate skirt and I just couldn't figure any way to accomplish the look I wanted. So, I'm making faux box pleats instead.

Here's a look at a few of the "underlay" sections on the original upholstery: 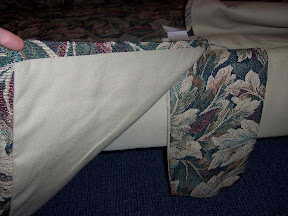 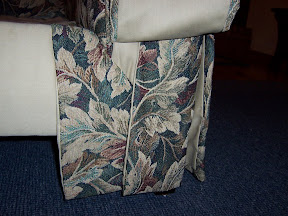 This is the back corner, normal (left) and underlay exposed (right) 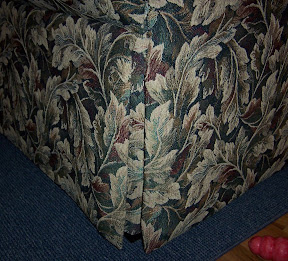 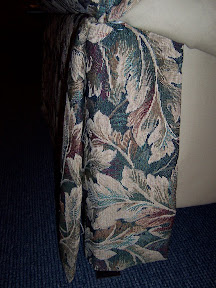 In order to make the faux box pleats work, I'm finishing each "skirted" section as a fully lined unit during the pin-fitting phase of the project, which means this is taking me about twice as long as it would if I had just made a plain old skirted slipcover. Ah well, maybe next time I'll go the easy route.

On Friday, I did a rough cut and pin fitting of all the pieces. For the inside and outside back and the platform sections, two widths of fabric had to be carefully pieced so that the seam would fall in the center of the sofa *and* making sure the pattern would match. 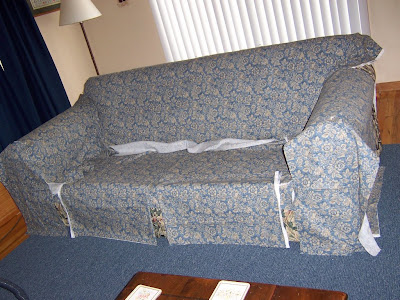 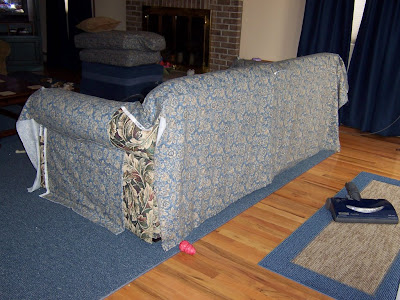 Those center seams look pretty good, if I do say so myself. Fortunately, with this fabric the overall pattern repeat is not too obvious.

By the end of the day, I had the inside back, platform and two front skirt overlay sections finished and pinned in place. 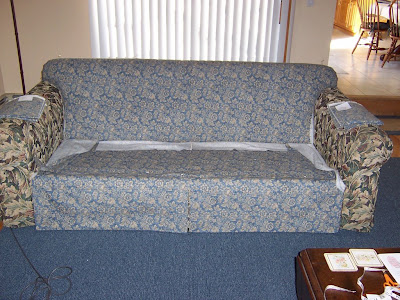 To fit the back shoulder, I pinned a few tucks: 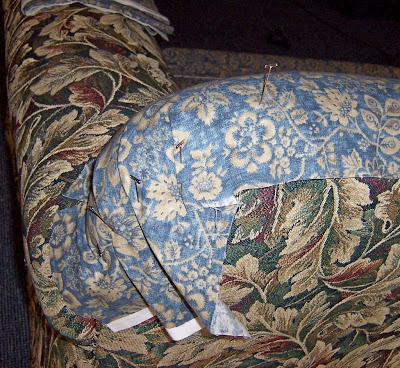 On Saturday, I finished pinning the inside arm sections and made the outside arm skirt overlays and arm front sections. Next, I'll be making all the underlay pieces and the outside back, before pin basting and finally sewing all the pieces together. I'll have photos of these steps next time.

As I mentioned last time, there are lots more photos of this project in progress in my Slipcovers Picasa photo album.
Labels: Home Dec/Crafts Sewing Slipcovers