I just wanted to follow up on my previous entry about the Stitch n' Pitch event at Shea Stadium last week.

Overall, I have mixed feelings about the event. I had a good time . . . but not a great time.

It's a great idea to combine needle arts and baseball. Most of us "stitchers" often create items showing our team affiliation, whether it's an article of clothing in team colors or a keepsake featuring the team mascot. I understand why most of the attention has gone to knitting and crochet, since most of the projects are portable and can be worked on while watching a game. And usually when you get a group of stitchers together, there's lots of social interaction, sharing of ideas, inspiration and show and tell.

Well - maybe it was because I went to the game without a project in hand and without a "posse", but this wasn't a very inclusive event, at least not for me. Or maybe it was the cold, rainy weather. Or it could have been the game itself. Or maybe because my seats were in the last row of Section 19 where the wind never stopped for a moment. I don't know. But there were definite "groups" of yarn workers there, who pretty much kept to themselves as far as I could tell.

I tried to make some inquiries about including other stitching arts in the future (like quilters and sewists), but didn't really get any kind of a positive response, which was disappointing. There was some sort of drawing between innings, but all the prizes were knitting books and I have no idea how they chose the winners. A day or so after the game, I read an account in the Lion Brand Yarn blog that over 1000 stitchers showed up. Maybe they sold 1000 tickets . . . at $10 each that's not a bad price.

Before the game, I read a press release online about Save The Children and Warm Up America's Knit One, Save One initiative. The article stated that blue and orange yarn would be given out to work on the caps during the game, so I brought along a crochet hook, knitting needles and some scissors and was ready to make a cap with everyone else. But when we arrived at the Stitch n' Pitch table I was told they were not giving out yarn, only the Knit One, Save One instructions. It was probably for the best, because my fingers were too cold to crochet anyway and I wore mittens all night. So I brought home the instructions and will make a cap and send it in when I can. But it won't be orange and blue; it will be something from my stash.

On a positive note, when I purchased my tickets, the Mets Online 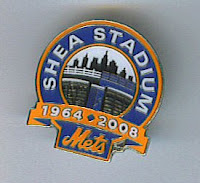 Ticket page promised a commemorative Shea Stadium pin. I've wanted one of those pins all year; it was the August pin of the month, but when I tried to buy one in August at the stadium they were sold out. Upon arrival at Stitch n' Pitch, we were asked to go to the fan relations booth to claim our pins, which we did immediately. So, I finally have my Shea Stadium pin (and a spare) and it only cost us two $10 tickets, parking and travel and a night in the last row in the wind and rain.

Despite the altitude, our view of the field was very good, but I kept losing sight of the ball after a hit. I think I just wasn't used to the angle. The game unfolded as usual when Pedro starts . . . the Cubs led early, the Mets came back to tie it. In the 7th inning, Pedro left the game with two on and the relief pitcher proceeded to give up a 3 run home run on his first pitch.

We considered going home early . . . we were cold and there wasn't any stitching going on for me . . . but decided to wait and see if they could stage a comeback. And the Mets did score in the seventh, but when they announced the new Mets pitcher for the eighth inning, I couldn't bear to watch it. So we left early - very uncharacteristic of us, but since we would be back for the final game on Sunday, we only felt a little guilty.

And wouldn't you know it, they did come back and eventually won that game. We listened to the game on WFAN all the way home and just as were pulling in the driveway, the game ended and the Mets won! And we looked at each other and both said, if we had not left when we did, they would not have come back like that. We just knew it.

Anyway -- IF there is a Stitch n' Pitch at Citi Field next year, and IF it is earlier in the season so I won't freeze and IF I can find someone who stitches to go with me, I MIGHT go again. But I won't feel bad if I skip it. And at some point this winter I may write to the organizers and encourage them to include stitchers of ALL forms of needle arts - not just those working with yarn. Otherwise they should call it "Knit n' Pitch" which would be more accurate.