Summer is officially over - the Mets have played their final game of the 2008 season and the last game ever at Shea Stadium. Just like last year, we were at that final game on Sunday and although I am very disappointed that they lost the game, I'm glad we were there at the end.

That game pretty much mirrored how the entire season played out -- a so-so start, falling behind about halfway through, an uplifting home run to tie it, then a deflating meltdown by the bullpen and the offense failing to deliver a late comeback. The season ended just about the way I thought it would. But I planned all year to be there for that last game, no matter the outcome.

Some random thoughts and opinions about the game:

About the Shea Stadium Closing Ceremonies: 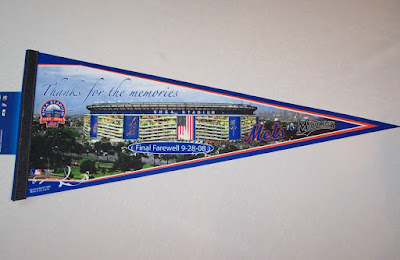 We planned to arrive early to see some of the pre-game activities. Two hours before the start of the game, most of the parking lots were already full, and the stadium was rocking in anticipation. On the way in, we noticed some people walking on the roof area -- above the Upper seat sections -- and wondered what they were up to. We made our way in towards our usual Gate A entrance, and stopped for a few moments to watch the SNY team next to the red carpet entrance. 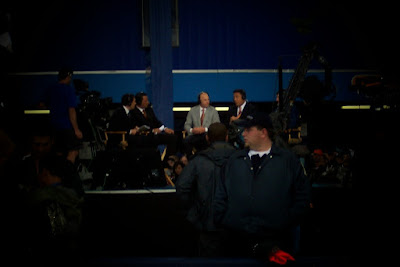 Once we were inside the stadium, we headed up to the Loge level and watched as many former Mets arrived, including original Mets, members of the '69, '86 and 2000 teams. We didn't have the best view, but we were able to see them just before they got on the elevators. In spite of a rain delay, the atmosphere was electric.

After the game, it took almost half an hour before the closing ceremonies began. It seemed as if almost everyone stayed to watch, despite the season ending loss. Security was everywhere! They introduced the former Mets players, who entered alternately from the corners of both left and right field, walked in and lined up along the infield between 1st and 3rd. Every player who entered was cheered, but the loudest came last for Mike Piazza and Tom Seaver.

Rich noticed right away that Piazza had a glove with him and suspected that the REAL final pitch at Shea would be thrown by Tom Seaver (not by some snarky Marlin with a chip on his shoulder). It was cool to watch all the former Mets cross home plate for the last time, and Piazza and Seaver were there at the end to walk out through the field, waving to the fans all the way towards the center field doors. It was just the remedy to help ease the pain a little. As they crossed the field and closed the doors for the last time, the lights went out slowly at Shea. Then there were a series of orange and blue fireworks overhead (and we realized that's why there were people on the roof before the game, probably setting up). And then it was over, a bittersweet ending. 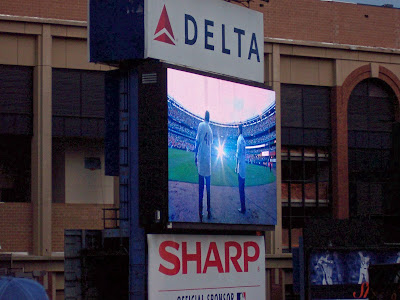 We took our time leaving for the final time, taking a few photos to remember this stadium. I was less than a year old when the first game was played at Shea; I think I was about 20 the first time I actually attended a game there, so my memories are mostly from the past 10 years when we had the opportunity to go to games and could afford the tickets.

There is a slideshow embedded below

Citi Field will probably be as nice as they say it is . . . I don't know how many games I'll be going to in the future. But I'll still be watching and cheering for the Mets!