A Pair of Mini Mirandas for Lauren and Emily

It's no secret that I've been mostly lurking over at the Lazy Girl Designs Yahoo Group and following the Lazy Girl blog for a while now . So right around the time I was finishing up Lauren's fabric book and trying to decide how to package it in an eco-friendly manner, Joan Hawley blogged about making a mini Miranda from Boy Scout fabrics.

At that point, I had pretty much made up my mind I was going to make a some sort of bag for the fabric book instead of wrapping paper or a paper gift bag, I just hadn't decided what kind of bag yet. I considered a simple drawstring bag or a tiny tote bag, but I really wanted something that would be re-used over and over. So a Lazy Girl bag was in order.

Originally, I was trying to decide between the Sassy Bag (of which I've made a few already) and the Runaround Bag (for which I have the pattern but have yet to make one). Neither bag was just the right size to fit the fabric book without making adjustments that seemed out of proportion. But after reading how to make adjustments to the Miranda to down-size it, a light went on in my head and I decided I just had to make one for Lauren. 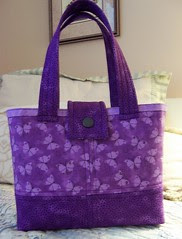 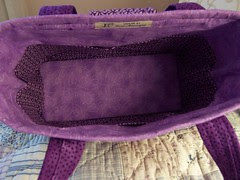 The Mini Miranda shown in the Lazy Girl blog measures 11" wide x 9" high x 4" deep; that seemed a little big for my purposes, so I reduced it even more down to 10" x 8" x4" which was just the right size, keeping in mind Lauren is 2 years old.


I used fusible batting this time and it worked very well; I didn't do any quilting at all. I didn't want to use the fusible velcro on this bag because I've had a few problems with it loosening up on some of my other bags, so instead I used a 3/4" anorak snap.


Close-up of tab and anorak snap: 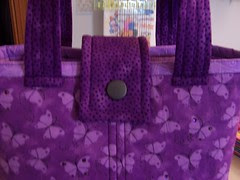 I chose the purple fabrics after I learned that purple is Lauren's favorite color, but the butterflies just seemed to need a little something extra . . . so I attached purple crystals to some of the wings, somewhat randomly, for just a tiny bit of "bling": 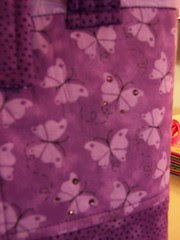 I've been told that Lauren loves her "purple pocketbook", takes it with her to school and refuses to leave the house without it.

Emily is my other August niece and this year was her 5th birthday. Last year she told me her favorite colors were purple and red; since I had extra purple fabric from Lauren's mini Miranda, I decided to make one for Emily (hoping she still likes purple). 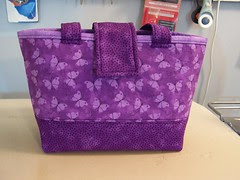 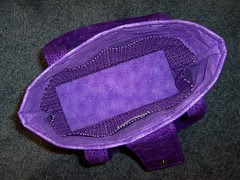 Emily's Miranda is the same size as Lauren's, but I cut a single width of fabric for the main and bottom parts of the cover instead of cutting and piecing a center seam.

For this bag, I used a magnetic closure on the tab. I've had a stash of these for a while now but this is the first time I've tried to use one. I can't believe how easy it was! 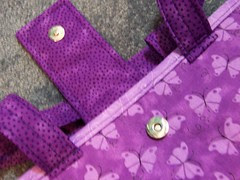 Last Christmas, I made a bunch of keychain fobs for gifts, but Emily misplaced hers and her mom had asked me to replace it. Of course, I forgot until I was making her Miranda, so now she has a new one: 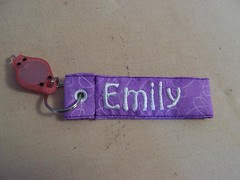 The little red thing is a mini flashlight. Emily started kindergarten this year, so I packed her new Miranda with some Disney Fairies pencils and pens and a couple of notepads and some other school supplies (I forgot to take a picture of that so I don't remember the rest . . .).

I'm not sure Emily was as enthusiastic a recipient as Lauren . . . she's a pretty tough customer. But her Aunt Sandy sure was eyeing that bag, so I'm sure someone will enjoy it.

I almost forgot to mention that I packed Emily's mini Miranda with a pair of With Love Totes (WLT), as part of the Make2/Give2 Challenge for National Sewing Month: 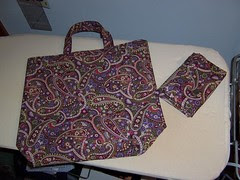 One of the totes served as the gift bag; the other I tied with ribbon for the gift part. I made both of the WLTs from extra fabric leftover from last year birthday gift for Emily - a Chelsea backpack. There were exactly two yards left, just enough for two totes.

I have a feeling Emily's mom will be keeping both totes.
Labels: Bags Purses and Totes Quilting Sewing