A Sports Bag for Jack

In September I wrote about how I embroidered my own customized freebie sports bag. Since I had 4 of these bags, I decided to customize one for my nephew Jack's 7th birthday. I followed the same procedures as I did on my own bag, except that instead of chalk, I used air-erase marking pen to center the design (you can see some of the purple still in the photo: 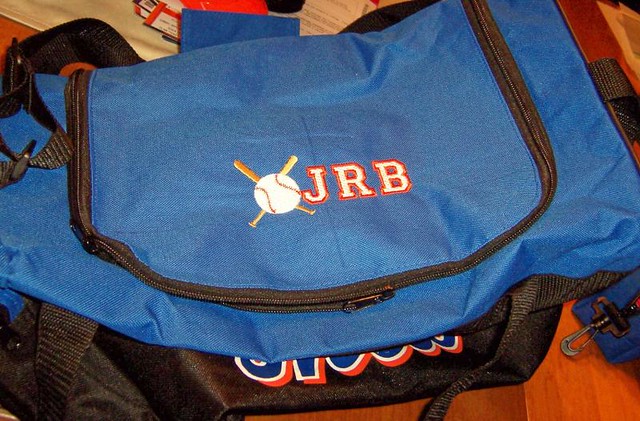 The baseball and crossed bat embroidery design was purchased from Embroidery Library; the lettering was created by me using Husqvarna Viking 4D Professional software. I only stitched Jack's initials on the outside of this bag so that if he uses this anywhere other than home, "strangers" wouldn't be able to call him by name.

To go with the sports bag, I made a small zippered bag customized with his first name: 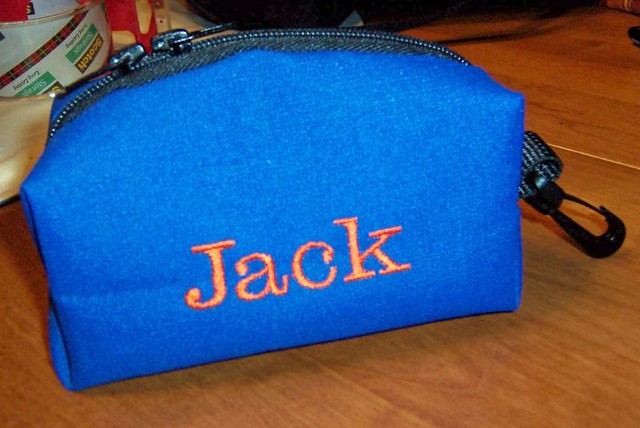 I used blue outdoor canvas fabric for the outside of the bag and a black nylon scrap of fabric for the lining. The instructions for making this bag appeared in Creative Machine Embroidery magazine in an article called "Bag it a Dozen Ways" part 1 in Nov/Dec 2006 and part 2 in Jan/Feb 2007. I added the swivel hook on the end so that it could be attached to the sports bag or to a belt loop or to whatever a 7-year old boy might want to hook it on to.

The finished bag was smaller than I anticipated, about 7" long by 4" high by 3" deep (these are approximate; I forgot to take more precise measurements before I mailed it off). But it's plenty big enough for holding a mini pack of tissues and a comb (which I included inside). It would probably also be very useful for toting a few toy cars or school supplies or a snack . . .

My favorite part of this little bag was the zipper. It is called a "purse" zipper and it zips from both ends. I haven't used this type of zipper before, but now I think I may pick up a few more just to have on hand for the next bag project . . .
Labels: Bags Purses and Totes Machine Embroidery Sewing