We do try to keep in the holiday spirit. And sometimes Keli indulges us by cooperating for photos.

The past couple of years she was a princess for Halloween (but refused to wear the pretty pink hat any longer than necessary to take the photo): 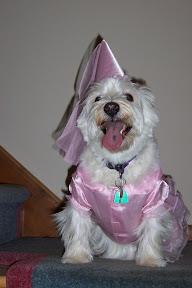 She was much happier as a princess than a pumpkin: 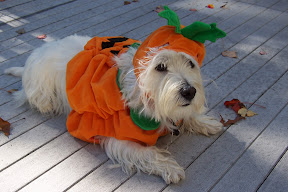 Talk about a sad puppy face!
For her first Halloween, we tried to dress her as an angel, since that's her middle name:

You probably can't tell, but in this sequence of photos, she was twirling around and around, trying to tear off the wings. And she hated the halo, too. (click on the photo to see it larger) 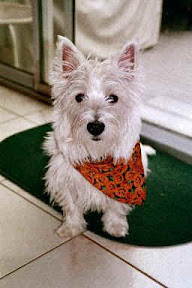 So, this year, she is a witch. A simple costume from the clearance section at Petco, basically a silly cape and hat. She's become much more tolerant after 5 years of this costume stuff. 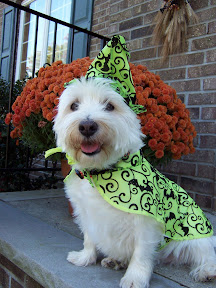 Do we ever go anywhere in these costumes? Noooo -- Keli only wears them on Halloween while she sits looking out the front door, waiting for the two groups of kids to ring the doorbell. That's all we seem to get -- one short group early in the evening, one taller group about an hour later and that's it for the night. Keli is part of the entertainment for the evening. I wish I had a video recorder to tape her silly antics when she realizes there are people at the door -- she howls and whines and yodels with excitement. It has to be seen and heard to be understood and appreciated. Maybe by next year I'll be able to upload a video . . .

We did a little fall photo shoot earlier this week . . . while the weather was still warm and sunny.
Keli has a collection of holiday collars, which she very much prefers to costumes. This one has pumpkins all over it.