At least a month ago, I started humming a tune I'd heard on TV over and over and over . . . it was driving me crazy until I realized it was the tune for the Radio City Christmas Spectacular commercial . . . I don't even know the words, but the commercial advertises Santa and of course the Rockettes in various costumes and dances. At some point, I decided it would be a good idea to make matching dresses for Keli and Penny, inspired by one of the Rockettes' costumes. They would be the Barkettes, and somehow I'd get them to pose just right for this year's Christmas card.

I know, it sounds a little bit "out there"; but they were so good when I asked them to pose for Halloween pictures, I thought maybe we could push them a little further as models. And no, I am not teaching them to do a kickline.

So I searched Google images, Flickr and the web for images of the Rockettes for a dress that could be duplicated for a Westie to wear. The Rockettes have a lot of festive costumes, choosing only one was a challenge. Eventually I picked a green costume and used this photo from Flickr member Alida's Photos for inspiration. 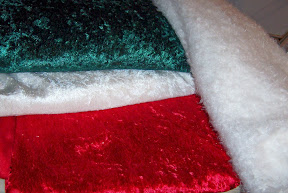 The fabric was easy to find. The model Rockettes' dresses appeared to be velvet; I bought green crushed panne at JoAnn Fabrics. The lining is from JoAnn's Casa Collection (bridal fabrics) because it was the only green that matched well enough.

Simplicity patterns were on sale, so I searched through the pattern books for dog costumes and clothes. There were two similar patterns available - Simplicity 3521 (below, right) had the best photo for what I had in mind (the red dress with white bow), but was sized for dogs xx-small to medium; Simplicity 3518 (below, left) was essentially the same pattern, scaled up for dogs sized large to xx-large. Since the were $.99 each, I bought them both and planned to morph them for my Westies. 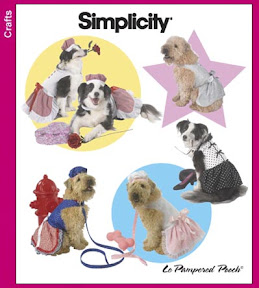 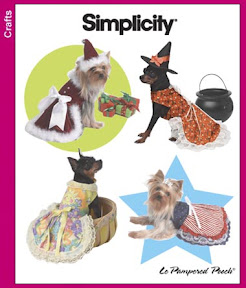 The dogs on these pattern covers do look a little bit goofy.
As it turned out, the medium from 3521 was too small and the large from 3518 was way too big for both of my Westies. I traced a skirt from the larger pattern; for the bodice I traced the smaller pattern, then overlaid the larger bodice piece and used it as a guide to add width across the chest and neck extensions.

First, I made a muslin from an old t-shirt to test the fit of the pleated skirt and newly drafted bodice piece. A few more adjustments were necessary -- the bodice was fine for both of them, but Penny's skirt needed to be shortened by 2 inches.

But before I could start sewing the pieces together, I needed to stitch the embellishment for the skirt and bodice. On the original Rockettes' dresses, they have a fancy snowflake design on their skirt and chest, and a red bow with a rhinestone buckle at the waistline.

I tried to create an embroidery design that would duplicate the shape on the Rockettes' dress, but was not satisfied with the results. So, instead I selected a design already loaded on my DSE, rotated it so it looked sort of like a snowflake, then reduced it to 65% of its original size. I embroidered this onto each bodice piece. Here's a close-up on the finished dress: 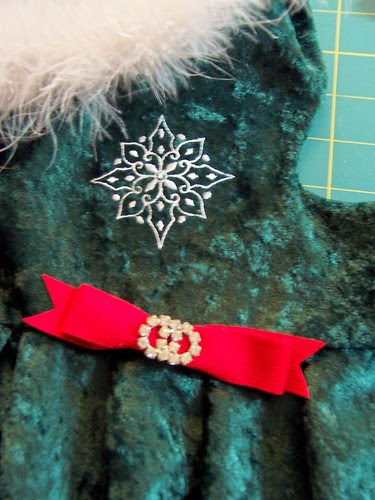 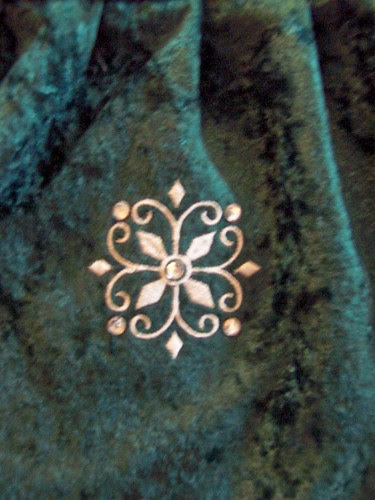 For the skirt, I needed to do a little design editing. Starting with the original embroidery design, I used editing software to remove all the pointy outer sections, leaving only the center design. I enlarged that to 130% and embroidered it on the skirt section.
It's not an exact match to the Rockettes', but it's close enough for Westies. I glued a few rhinestones onto the skirt for a little extra sparkle, but I doubt any more will show up in our photos.

Last, I hand sewed the feathery boa to the neckline and made the red bows. The bows are from a scrap piece of velvety ribbon I've saved for recycling. The rhinestone accents were mine -- they are shoe jewelry. I used to wear them with plain black pumps to dress up for holidays, until the clasp broke on one of them. They are just tacked in place for now; when we are finished with the Barkettes costumes, I will reclaim them.

Here's one of the finished Barkettes dresses, before I attached the velcro closures to the neck and side extensions: 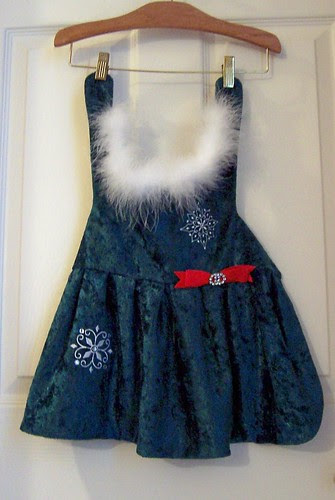 They're not an exact replica of the Rockettes' dress -- they don't have long sleeves, and there are less rhinestones and I gave up on trying to do a matching hat. But I am pretty pleased with the way they turned out.

You'll have to wait a while to see them on the Westies . . . I still need a few props.
Labels: Garments/Wearables Machine Embroidery Pets Sewing Westie Clothes Westies