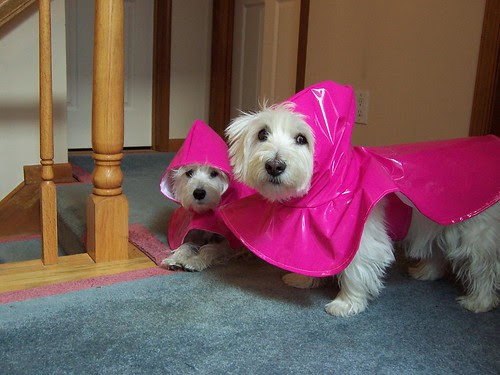 Back in February, I made fleece coats for Keli & Penny using Butterick B4885, views C and D. Keli's coat still fits her just fine, but Penny has grown up quite a bit since February, when she was only about 5 months old and thin as can be from her month at the shelter. She weighed about 10 lbs. and was all skin and bones. I made Penny's coat extra small and it just about fit her through the rest of the winter.

All summer long I plotted to make them a matching pair of hoodie rain slickers using View B of this pattern, because they both dislike going "out" in the pouring rain so much. We found pink pleather when the Halloween costume fabrics came in at JoAnn's Fabrics, and a few weeks ago I finally got started on the raincoats.

Working with the pleather was not as difficult as I expected; I used the teflon foot for my sewing machine, a microtex needle and regular sewing thread and everything went along smoothly at the machine. Tracing the proper coat and hood sizes proved to be more difficult.

I traced the sizes I expected the Westies to wear -- Keli, a large width but a medium length and neckline and for Penny a medium width and a short length and neckline for her thinner frame. The coat pieces fit them pretty well, but the hoods were kind of wonky. I had to take Keli's apart and cut and re-stitch it so that it's almost okay.
Don't they look so happy trying on their new coats? Maybe the hoodie idea would be better in a soft woven or knit fabric, but in this pleather, they just don't work. There is just no way that these hoods could be comfortable on a dog unless they keep their head at a constant right angle to their body. The funny thing is, they do kind of look like the picture on the the pattern cover. Here's a better angle on Keli's hood: 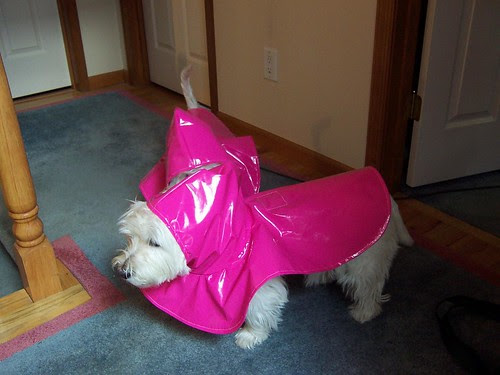 The way the pattern has the straps attached, they look like they are wearing vinyl placemats; the coats stick straight out in front and at the sides.

Here's another view of Penny's hoodie: 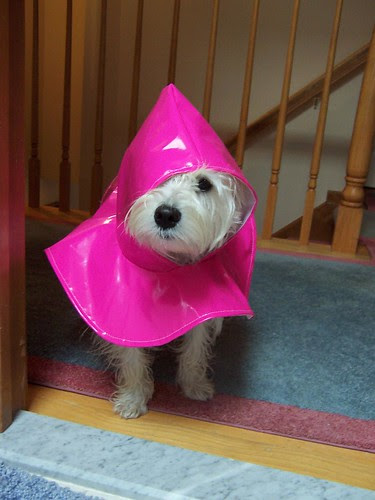 Needless to say, they both pretty much hate the pink raincoats.


So I've done some more cutting and re-stitching on Penny's coat, but I'm waiting for some wide velcro to arrive in the mail. I couldn't find it locally, so had to order it online. After I get the re-fashioning done, *if* the fit is better and actually wearable, I'll try to post another picture. But these photos are pretty funny.

We had much better luck with the fancy Winter Coats. While I was making these, I kept thinking how nice they would look if we take them visiting anyone this winter. 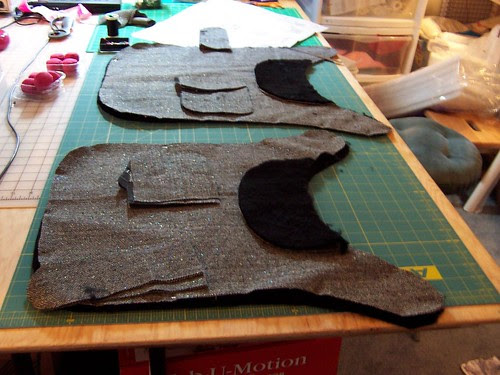 These coats are made using the same Butterick pattern B4885, View C, which is the version on the pattern cover being modeled by the floppy-eared terrier that sort of looks like Penny. I used View C for Keli's pink coat in February, so the fit on that one suggested additional sizing adjustments to the front and belly straps.

Penny's pink coat from February was so tiny on her now, the belly straps didn't even meet each other. I re-measured her neck to tail length, and she was a full two inches longer. I traced her coat with the short sized length and straps, and a medium width.

The fabrics for the new coats were both remnants from my stash -- just under a yard of a wool blend suiting for the outer layer and a little over 1/2 yard of some fuzzy black faux fur. I had to do a little creative cutting to get all the pieces for both coats from the faux fur.

Here's a closer view of the suiting fabric - it has bits of glitter throughout. 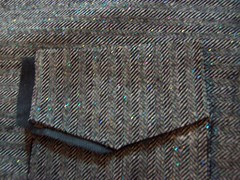 This version of the coat went together quite easily. I didn't follow the pattern instructions for making a patch pocket -- it sounded too complicated. Instead, I cut a piece of fusible knit interfacing in black for each pocket and flap. I sewed one pocket piece to one interfacing piece with the fusible side facing out and leaving a space for turning. Then I trimmed the seams, clipped the curves, turned the pocket piece right side out, and ironed it flat to fuse the pieces together. The perfect patch pocket. The pocket piece could then be topstitched in place. I followed the same process for the flaps, but before stitching them onto the coat, I made buttonholes using the sensor-buttonhole foot, so they were all exactly the same size. I have to admit, it was fun.

Penny tried on her coat for size before the buttons and velcro closures were stitched in place: 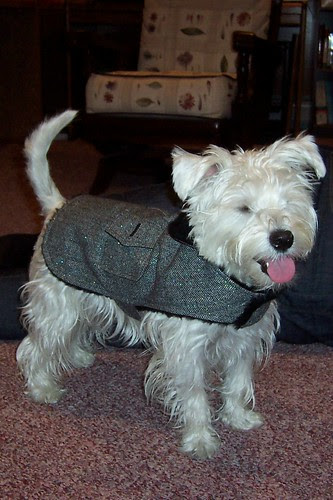 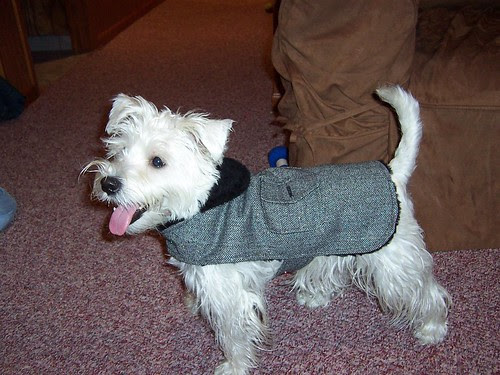 Can you believe I didn't have 4 matching black buttons for these? It took me a couple of days to get out and pick up some basic black buttons and then hand sew them in place.


Here they are wearing their newly finished coats (Keli is in back, left; Penny is in front, right): 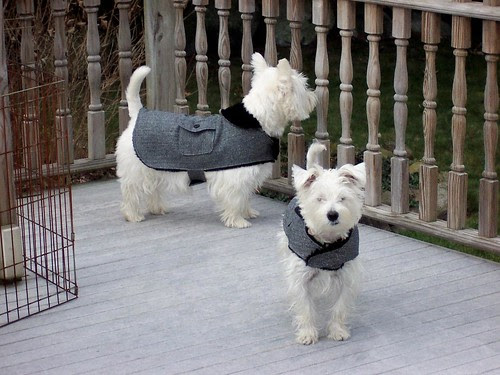 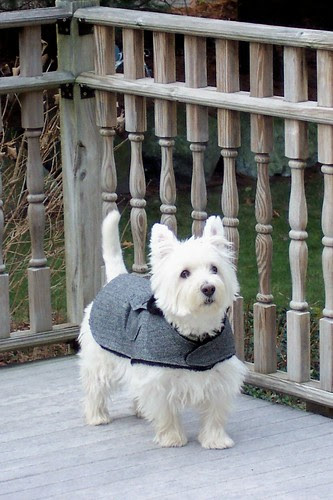 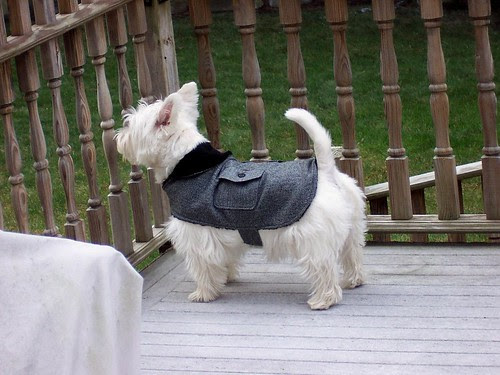 Keli's coat is just a bit long on her, but luckily she doesn't seem to mind.


Next on the sewing agenda is a pair of matching dresses for the Westies inspired by the Rockettes -- no, we don't dress them up as habit, they really do hate it. These will be costumes for a Christmas card photo.

The dresses are almost finished and I'll write about them tomorrow. I just need to gather some props and figure out how I'm gonna get these two Barkettes to pose the way I want them for the photo . . . at the rate I'm going, it may end up being an after-Christmas card . . . more to follow, soon.