My sewing room has been possessed by goblins for the past couple of weeks. Let me explain . . .

Last year, I purchased these machine embroidery designs from EmbroideryLibrary.com. I stitched a sample of the jack-o-lantern appliqué design last October, but didn't quite have a plan for what to do with him when he was done, so he's been in my pile of sample stitch-outs, waiting patiently for me to have an idea. I re-discovered this little jack-o-lantern while cleaning up the sewing room after my t-shirt project.

It's time to do something with me, he said. Stitch out the black cat and ghost designs and something will inspire you, he said.

Not wanting to risk offending this ghoul, I pulled out my stash of wool felt and spent an afternoon stitching out the black cat appliqué and ghost designs in coordinating colors. I modified the lettering on the ghost design; originally it had Trick or Treat curved above it and I decided to change it to No Tricks, Just Treats using one of the spooky fonts in 4D Embroidery.

And now I had 3 coordinating designs without a clue how to put them together in a single project. I put them away for a few days.

In order to use the ironing board for a different project, I needed to move all the wool felt off of it (cleaning up again) and this time the black felt starting speaking to me.
Use me for the background, it said. Not a bad idea -- black is one of the colors common to all three design blocks, so I cut a strip of black felt and spaced out the the embroideries in a horizontal row but that didn't seem right. I turned them so they were in a vertical column and the black cat design started to purr. Honest, it really did!

I couldn't decide how to attach the design blocks to the black background - straight stitching, layered over another piece of felt, or framed in reverse appliqué . . . I tried a few different samples and decided to attach them using a buttonhole stitch. I planned to use this stitch on another project, so needed to practice some more anyway.

But before I could start sewing the pieces to the background, it growled at me and said it needed embellishment. What now, I asked.

Free motion stippling with variegated cotton! it replied. Well, I've had my Fabric Mover for about 2 months and I've only used it a couple of times. Okay, I thought, I need the practice, the black felt wants some color and I have a spool of Sulky 12wt cotton with oranges, reds and yellows that would look pretty cool.

The Fabric Mover got a workout last Sunday and I got a chance to play with swirls and stipples and all kinds of scribble-y shapes. Some of them are a bit wonky and scary-looking, but hey, this was a Halloween experiment, after all. And besides, the black felt got the color it demanded, so it's all good!

When I finally sat down to sew the embroidered squares onto the background, no one complained. 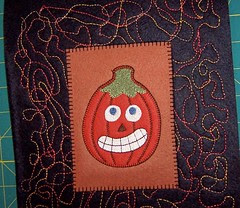 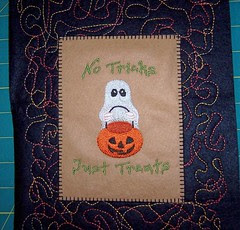 or the black cat 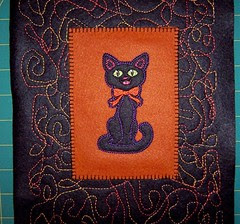 I'm calling this a wall hanging, even though it doesn't quite feel finished just yet. I'm waiting for whoever is haunting my sewing room to tell me what it needs next. Maybe the felting machine will demand a chance to come out of its box and work a little magic. So this is still a work in progress for now.

Before the creepy voices started, I was working on some Halloween costumes for Keli and Penny:
Ghouls just wanna have fun 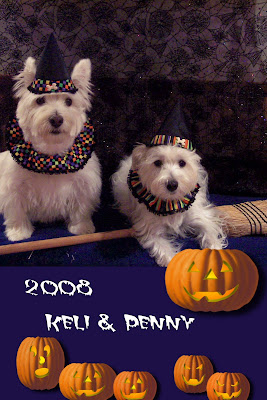 I made them very simple neck ruffles -- they are just fabric "donuts" with elastic inserted inside, no pattern used. The hats are based on Butterick B5117, View B, but we left off the brims, because even for a size XS, they were just too much hat for a Westie head. They *hate* stuff on their heads anyway, so less hat was better. I used a remnant of black satin for the top part of the hats and coordinating Halloween cotton fabrics for the accent to match each Westie's neck ruffle.

When I asked them to try on their new ruffles, Penny thought they looked too plain, so we added some specialty yarn (Bernat Boa in Raven black) stitched on around the edges of the ruffles and base of the hats. Then Keli wanted some bling, but nothing shiny, so I used button pins to attach a couple of bone buttons to the hats. No, they are not Doggie Divas, just Westie Princesses. Well, Keli is the Princess; Penny is more the Court Jester. But I digress . . .

Finally, we were all happy with the ruffles and hats and decided to take some photos: Does anyone else try to make two crazy Westies sit still, sit next to each other while holding a broom and look at the camera and look happy about it without shaking off their hats? Or is it just me?

Some clearer photos of the ruffles and hats on a much less fidgety model: 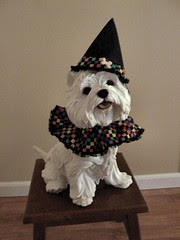 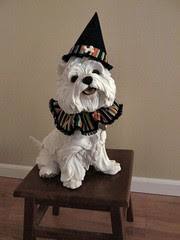 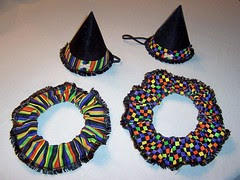 You can see more of our Westie Howl-a-ween dress-ups and photos over at Keli's Korner: No Tricks, Just Treats or in their SewWestie Flickr Photostream; some of the shots are actually pretty good. All the other outfits were purchased, but I think I can use them as patterns for next year... or maybe Christmas.