I've finished a couple of Lazy Girl Designs' Sassy Bags in the past few weeks. The first one coordinates with the Westie Miranda day bag from April and the other is made from Mets logo fabric. 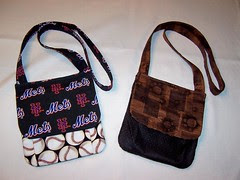 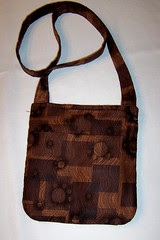 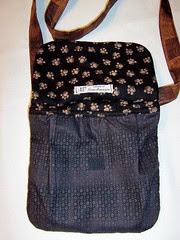 The sample stitch-out I created when I was working on the Westie Miranda day bag is now the front flap of this Sassy Bag. The piece was not large enough for creating the flap as described in the Sassy directions, so I measured and pieced the front and inside of the flap with coordinating fabric. I also ran out of the black accent fabric used for the bottom front, and again pieced it with the same coordinating pawprint fabric. I left some of the pawprint showing at the top, similar to the faux binding on the Miranda.

I haven't added any embellishments - yet. I can picture little black hot fix crystals on the Westies' noses and as pawprint accents, but since I haven't found them in a reasonable quantity yet, I haven't been able to add them. (I don't really need to buy a gross of crystals . . .)

This bag has turned out to be the most useful so far! I like the Miranda, it carries everything and it looks sophisticated, but for quick trips to the store (for just a spool of thread, for example) it's so nice to just grab my Westie Sassy and go. It has room enough for the essentials, but doesn't weigh me down. I just need to remember to transfer my Westie Wonder Wallet from the Miranda to the Sassy before I leave the house. I've been using this bag on and off for a few weeks now.

I actually used the Westie Sassy to carry all my stuff to the Mets game on Mother's Day instead of last year's Amazin' Mets Pocket Purse. I still really like the Pocket Purse, but it just doesn't hold everything I need to have for a game. It occurred to me that what I really needed was a Mets Sassy . . . so here it is: 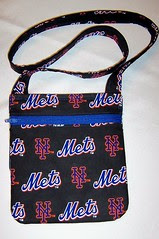 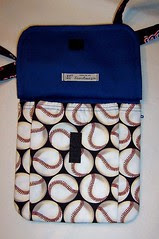 I'd been thinking about this Sassy for almost a week and finally on Sunday afternoon I decided I just had to get it out of my system and make this bag!

First off, I liked the way the Westie Sassy looks with the outside and inside of the front flap in different fabrics and I wanted to conserve the Mets licensed fabric, so I pieced the flap again. The inside of the front flap, the lining and the inside pockets are all made from a blue twill remnant. It's got a little bit of weight to it, which I liked, plus it's the perfect shade of blue. The bottom front baseball fabric is a very lightweight cotton remnant I've had in my stash for a few years. I added fusible interfacing to it before assembling the front to give it more weight, too. It feels nice and sturdy.

Next, I thought it would be a good idea to add a zipper to the pocket in the back, so I could stuff in tickets and other stuff without losing track of them. I was partly inspired the Lazy Girl Yahoo group members who had added zippers to their Mirandas and Wonder Wallets. The Runaround Bag was cited for directions on adding zippers to their designs, and since I've just recently acquired that pattern I pulled it out and used it for reference. But mostly I just fiddled and fudged until I had a back pocket piece that worked.

I actually considered making a Runaround Bag instead of a Sassy . . . but after weighing the options, continued planning the Sassy. I'll make the Runaround soon, though . . .

By the time I decided on all my fabrics and thread and zippers, it was almost 5:30pm. I originally thought I'd use an orange zipper, but didn't have any at home. JoAnn Fabrics closes at 6pm on Sunday, so of course it was a mad dash to get there in time. I ended up buying both orange and blue zippers and I'm glad I did. I like how the blue coordinates with the inside of the bag. I have orange fabric I could have used for the inside, but the combination with an orange zipper felt more halloween-ish than baseball-ish.


After dinner, I reported to the sewing room and made this bag while watching the Mets defeat the Yankees for the second game in a row. I didn't think they would pull it off, but they did.

Here's a peek inside the zippered back pocket -- notice how I left the back piece as a lining: 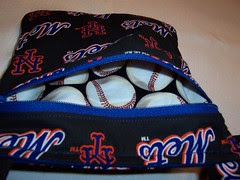 I need to get some sort of fob for the zipper -- I have small plastic baseball beads ready to string onto - what? Ribbon? I'm still working on that idea.


And here's a peek inside the bag, all ready for the next Sunday home game against the Dodgers. It will hold my cell phone and my AM radio, plus my Wet Ones and Hand Warmers, and more to be added later. 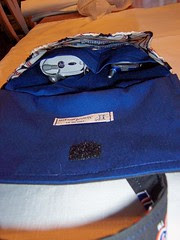 And, Yes, I'm a geek -- I bring the AM radio to the game so I can listen to Howie Rose on WFAN explain what is happening during the game. There isn't an instant replay when you're at Shea Stadium, plus there are a lot of distractions (like hot dog vendors and other fans) and if I can't listen to Gary, Keith and Ron call the game on TV, Howie is the next best way to keep informed.

And I need the Wet Ones because the ladies' room doesn't always have soap and the Hand Warmers are for the April, May and night games when I get cold. I usually also carry lens wipes for my (sun)glasses, Advil, lip balm, a Mets pocket schedule, a small tin of Altoids, house keys, my ID, some cash and my Mastercard. All the essentials, right?