One year ago today, March 10, I attended a class on pattern fitting and alterations for pants and wrote about it here. I made so many mistakes in that class while working on the muslin! But I ended up with a practice pair of pants that fit me pretty well, so it was worth it.

The pattern I used in class was Simplicity 3962, an out-of-print Threads collection pattern featuring pants, skirt and a jacket, and I chose it mainly because it did not have a separate waistband for the pants/skirt so I thought it would be quick and easy to sew in class.

A few weeks after class, I made a real pair of pants which I referred to as the "dirt pants" because the fabric color was called "potting soil"; I wrote about that in this post. Funny, I ended by saying I wanted to try to alter another pattern in a few weeks' time . . . well here I am 12 months later, finally trying to make pants from a different pattern! I kind of got sidetracked with other projects, but I've decided that this year I *will* work on garments for me!

The pattern I *really* wanted to make last year before taking the class is Simplicity 4273 - an "easy chic" ensemble pack. 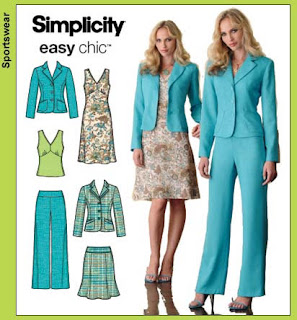 I tried to make the pants on my own before the class and failed badly. Although I think I did a pretty good job with the invisible zipper, the waist was huge, the rise was all wrong and I just didn't know how to fix it. But after taking the alterations class, I thought I had a pretty good idea about how to make this pattern work.

Last week, I pulled out all my class handouts, pattern pieces, fitting books and made a muslin version of the pants, making the alterations I thought I needed. I'm not posting any photos of that muslin -- it wasn't awful, but the photos I took to help me figure out my fitting issues are not the kind I want floating around online.

The first muslin sort of fit -- it needed tweaking to increase the inner leg seam and the crotch length and depth and the waistband needed darts to reduce the top edge by about 2 inches even though it's supposed to be an inch lower than the natural waist . . . in the end I decided what I really needed was a larger size pattern to fit the lower half of my body rather than try to figure out all the adjustments on my own. So when JoAnn Fabrics had Simplicity patterns for $1.99 last weekend, I bought the larger size for the pattern.

From now on, if the pattern doesn't have all my sizes in one package, I'm just going to have to buy two packages when they are on sale and mix and match.

Last night I worked on my second muslin for this project with much better results. Both packages of the pattern have a size 16 in them, which is what I am using for the lower edge of the waistband. I used the larger pattern pieces for the main part of the pants, gradually increasing the size from 16 at the seam that meets the waistband to where I need it to fit the hips and I used the smaller pattern for the waistband, adding darts to the pattern piece to take out the extra space in back.

The front yoke fits just fine . . . but the back waist always gives me problems, even in ready-to-wear pants. So I slashed the back yoke piece in line with where the darts would be on the pants and then overlapped the top edge by 3/8" to take out total 3/4" on each side of the back. This gave me a more curved back yoke.

And the new muslin fits much better. I need to tweak it just a bit -- the increase to the hip size needs to be more gradual, but I think I can accomplish that by adjusting the seam allowance while sewing. It bubbles out a little, but that could also be due to the fact that my muslin is heavy weight and somewhat stiff; maybe a softer fabric will drape better? And I need to take another 1/2" from the waistband, which I think I can accomplish by adjusting the angle of the center back. I might try one more go at the muslin waistband . . .

But I think I'm ready to cut the good fabric -- I have plenty of "potting soil" from last year's purchase, so I'm planning to use that for the next attempt. And hopefully, I'll end up with something wearable. At last.
Labels: Garments/Wearables Pants-Shorts Sewing