New Coats for Penny and Keli 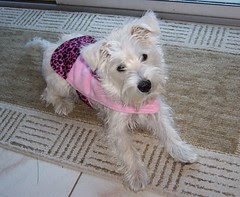 Denise came to visit Penny and Keli a couple of weeks ago and suggested I should make them matching outfits. That would have been just too cute -- but I'm not really into cutsie stuff, and anything too precious just is not westie-like. So I decided to make them coordinating coats.

I bought Butterick pattern B4885 last fall during one of the sales at JoAnn Fabrics, intending to make a nice winter coat for Keli. I've always had trouble finding coats, sweaters and costumes that fit her, because she is long in the body and most coats and sweaters that fit an average westie are just too tight and short for her. And if I buy the larger sizes, they are too big and loose in all the wrong places.

I made a coat for Keli last winter without a real pattern, that fits her rather well. To create the pattern for this coat, I used two others - one that fit her body length and the other that fit her chest and neck - to morph together a rough pattern. She likes this coat (as much as a westie can like an article of clothing) but I thought it would be nice for her to have one of those cool, stylish coats like those in the store; that's why I bought the pattern.

Both Keli and Wyndi (my first westie) were puppies during the spring and summer, so all my purchased winter coats and sweaters are sized for near adult westies. So poor Penny, who came to us in late January at about 5 months old and weighing about 10 lbs. had no hand-me-downs to wear. She was all skin and bones - no body fat or thick fur coat to keep her warm. So making her something warm to wear became a priority. (Since coming home with us and getting good food every day, she has gained over a pound and is starting to fill out nicely!)

I chose View D for Penny -- it has the extra little accent of faux fur on the hip section, a look which I decided she could pull off because she is so thin. I traced the pattern for size XS onto a piece of muslin, then cut out the pieces of Penny's new coat from anti-pill fleece and pink leopard velboa (used previously on this hat). I moved the straps closer to her front legs by about 2 inches so that it would not be in the way when she needs to relieve herself, but I probably didn't need to make that adjustment. 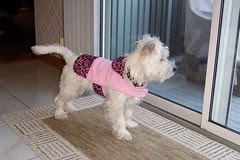 I think she may already be growing out of this sweater!

Keli's sweater came next -- I didn't want to make View D for her, because it would be too matchy-matchy with Penny's coat and because she has a good, thick coat of fur and would probably look a little too chubby with the accent on the hips. And, I wasn't sure how I was going to size this pattern for her torso and didn't want to waste the velboa.

So I chose View C for Keli, and since this is a just a trial run on this pattern, I left off the pockets and made it from simple fleece with the pink velboa collar and straps. I traced the size Large first, then reduced the length from neck to tail to Medium. I later had to move the straps up to the Medium marks also. This fits her well along the sides, but I think next time I'll try to re-draw the neckline to a Medium size as well to keep it from sliding back onto her tail (the fit is a bit loose around the neck). So she's basically a size Medium, but widened to Large at the sides to keep her warm and dry. 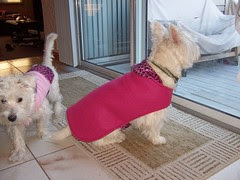 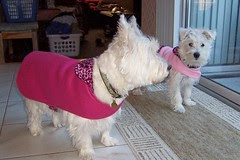 The straps under the belly on both jackets seem way too long -- next time I could shorten each of them by at least 2 inches and there would still be plenty of overlap.

This isn't too cutsie, is it? They don't match exactly, but they go together, no?


(These two are not cooperating for photos this morning -- not looking at me and posing at the same time, so we have to settle for the profile and back of the head photos). 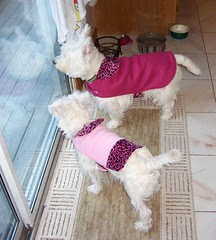 I'll try to add a review of this pattern at PatternReview.com later this week. Update: Review added 2/26/2008

I'm also thinking about making them each a coat from View B of this pattern -- the one with the hood -- since they both seem to dislike going out in the rain so much. It's just a question of whether they will find the hood or the rain more annoying. Or maybe both . . .
edited Sep-11-2020: Correct photo alignment, formatting
Labels: Garments/Wearables Pets Sewing Westie Clothes Westies