Just over a week ago was Kathleen's baby shower and even though all of us "cousins" chipped in together on a big gift, I just had to make a few items. 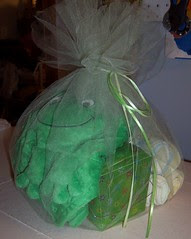 I checked her registry and based on the items she selected I decided I just had to make another frog hankie blankie (just like Ryan's Christmas gift): 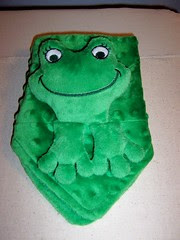 And something new for me -- some burp cloths made from cloth diapers with a strip of flannel attached: 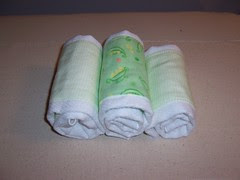 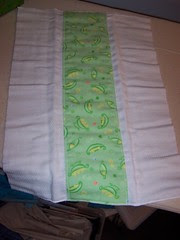 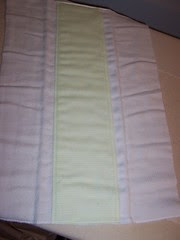 I added small embroideries to some plain little washcloths. The purchased washcloths seemed kind of flimsy - just a piece of terrycloth with serged edges. So I embroidered in the corner of one cloth, then backed it with another cloth and serged the two together to hide the back of the embroidery and make a more substantial cloth. The embroidered designs are from Embroidery Library's Baby Nursery Design Pack-small. 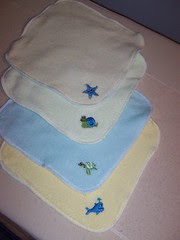 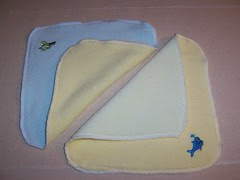 And last, but not least, some Minkee Pals packed in a cute little take-out box: 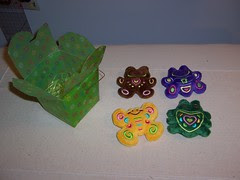 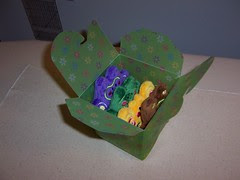 When it was time to wrap these items I realized I didn't have a large enough gift bag so I had to improvise. I had some leftover green tulle from a previous project so I wrapped all the pieces inside the tulle and tied the top with some coordinating green ribbons.


The Minkee Pals were made last year when I was building up an inventory of them for various gifting reasons, but all the other items were made a couple of days before the shower -- and about two days after Penny came to stay with us. I had some reservations about trying to sew with her scampering around . . . but after sniffing a few of my baskets and barking at her reflection in the mirrored closet door, she settled down on a piece of furry fleece and went to sleep. She was so good, even when I had to step over her to move around the room she just kept sleeping. Now Keli wants her own fleece blanket to sleep on, so guess what I'll have to add to my project to do list . . .