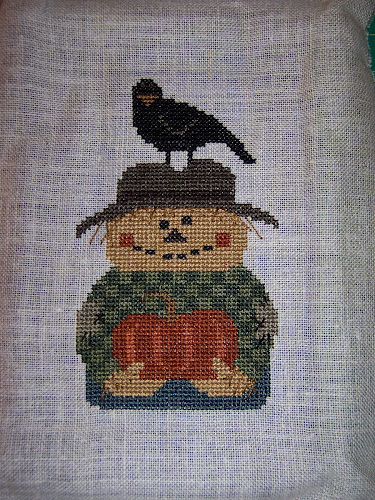 I just put the final stitches into this piece, my first completed cross stitch project in at least a year. It is called "Scared Crow?" and is a Zipper kit from Bent Creek. I realized after I took this photo that I forgot to sew the button under his chin . . . that's taken care of now.
You know how some projects remind you of the place or times you worked on them . . . well, this one will always remind of Summer 2007, even though I started working on it in October of 2006. I know that's when I started it, because I remember I took it to the October '06 Bergen EGA meeting to have something to work on. And I chose this kit because it had a large count fabric (18 ct. Lambswool) and required a single strand of pearl cotton for stitching. So it would be easy to see in bad lighting. I think I must have put in about 30 stitches at that meeting, then it landed in the UFO pile for a few months.
Fast forward to May 2007 . . . that's when I started babysitting my nephew Ryan one day a week. He was 4 months at the time and didn't really need much entertainment, so after feeding and changing him, I had some extra time on my hands while he slept. Sometimes I napped, too. Lots of other times, I worked on my Scared Crow project.
There were days when he would take 3 hour naps . . . I made a lot of progress on those days! Other days he would take short cat-naps and I didn't get much stitching done at all. One afternoon in July when the weather was not hot and he had refused to nap, we took a walk where he promptly fell asleep in the stroller. So I parked him in the shade in the back yard and pulled up a chair and stitched outside while he napped. We both were in a better mood when he woke up. :-)
As the weeks went on and my project was closer to completion, I thought it would be nice if I actually finished it in time for autumn. This babysitting gig was a short term assignment, just until Ryan started daycare at the end of the summer. I started to think maybe I could finish the Scared Crow around the same time the babysitting job ended. I almost made it.
Ryan started going to daycare a couple of weeks ago, so I no longer make the trip to his house each week. His dad says he loves it, plays with all the kids and never even misses his parents when they drop him off. He's almost 8 months old now and is really ready to socialize.
But my Scared Crow project was not quite finished . . . so I had to make a point of scheduling a few hours to finish the last few stitches this week.
I remember buying this kit in 2002 at the CATS festival in Hershey, PA. That's probably the last time I did any really serious needlework shopping. Right after that I decided I would only work on UFO's and already purchased and kitted projects. Ten years ago, I'd never even consider stitching a project like this . . . it just didn't appeal to me then. It was too cute, too whimsical, not sophisticated enough. Back then I was stitching lots of Lavender & Lace Angels and band samplers.
Then around 2001 I had a change of style . . . and whimsical projects didn't seem so silly to me anymore. Projects like this one, that are easy to see and stitch, are much more appealing these days.
I don't think I want to frame this Scared Crow . . . I think I'd like to make him either a stand up figure or a wall hanging. I'll have to go shopping for just the right backing fabric and let it tell me what he'll be . . .