July 22, 2007
I've been a little bleary eyed all week -- we've been up late trying to watch the Mets games, but they've been on the West Coast. Most of the games didn't begin until 10pm and couple ended after 1am . . . thank goodness for the Fast Forward recap on SNY!
On my way home from Connecticut last Thursday, I stopped at the JoAnn's ETC at the Palisades mall; I was looking for stretch terry and ribbed knits for my latest project and started chatting with the ladies at the cutting table. I noticed they had TONS of MLB fleece and cotton fabric for the Yankees, Red Sox and even the Florida Marlins (?) but nothing for the Mets. So I asked if they know why I can never find any Mets fabric . . . and one of them replied that she had just special ordered the Mets fleece, it just wasn't on the same rack with all the others! 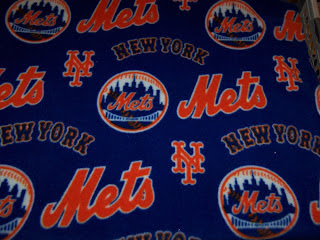 Guess what I came home with? Yep, 2 yards of this Mets fleece. I bought 2 yds on eBay a few months ago, so now I have enough to make several blankets for the post season games.

In June, I received an email from Cablevision about a sweepstakes from iO and SNY - the "Amazin' Day at Shea" sweepstakes where one winner would be selected to throw out the first pitch on August 21 and win tickets to a luxury suite; second prize was an HDTV (I think); and third prize was a 4-pack of tickets. How cool would that be, to get to throw out the first pitch? I'd have to start practicing throwing . . . A TV would be nice, too. And free tickets . . . I always try to win those!
Well, on Friday afternoon, I received a confirmation email that I won -- one of 125 third prize winners. So I guess I'll be watching the mailbox for my free tickets.
We have tickets for next Saturday's day game (a make up from April) and Sunday's game vs. the Washington Nationals. (Sunday is Seat Cushion Day)
Fabric Let's Go Mets Mets Sewing