During July and August, 3 nieces and 1 nephew celebrate birthdays; 3 of them are celebrating their 1st Birthday this year. Richie and Abby had July birthdays and Lauren and Emily (my 2 goddaughters) have August birthdays. I like to make something special and unique for each birthday, so I've been quite busy getting these together over the past few weeks.

Spoiler Alert for Richie's and Lauren's families -- photos posted below -- if you want to be surprised, do not read any further!

Richie's birthday was the first -- I wanted to try a new minkee project. I had purchased a Zebra Letters design CD from OESD in May which included 50 5" squares of minkee fabric in pastels. Well, I didn't care much for the pastel colors they sent me, which included pink, peach, white, cream and green; but it was a clearance item, so I'm not complaining. I just substituted some colors from my stash to create these soft letter blocks: 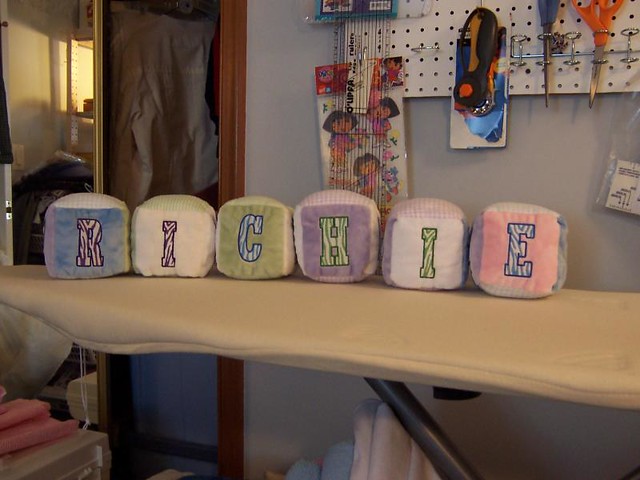 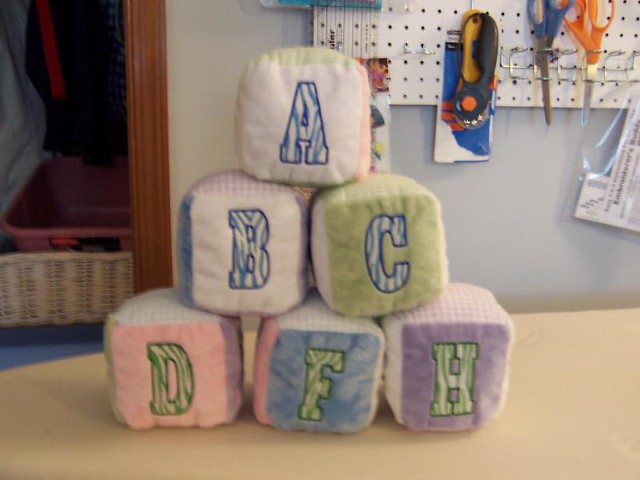 As you can see, I added blue and purple to the color palette and omitted the peach. I think the zebra letters turned out well; they were embroidered in blue, green and purple to coordinate with the minkee fabrics. It took me the better part of a week to embroider all the letters, partly because I wanted to arrange them so that I could spell out specific words. To save some time I decided to have letters on only 4 sides of the blocks; the top and bottom are squares of coordinating flannel. They are lightly stuffed with Silky Soft fiberfill, so that they are easy for little hands to grab (and most likely bite!).

There are 6 blocks all together, and they can spell the words: Richie, Emily (his big sister), mommy, family and the two family names. They were supposed to also spell daddy, but somehow I messed that up . . . oh well. Next time I'll get that right. There are lots of other words they can spell (but I don't think I included a T so they won't be able to spell "METS" -- I'll have to remember to fix that next time, too!). I've already run them through the washer and dryer and they survived the laundry test and are ready to deliver (probably when we celebrate Emily's birthday in August).

Abby's birthday was next in July . . . I hadn't made any Minkee Pals for her yet, so I sent her an assortment of various "girly" pals, including the flowers, shapes and butterfly.

Lauren's birthday is coming up in early August. I am working on a couple of Sleeve Saver bibs for her. These are made from a pattern from Sew Baby and are super easy to make. The photo below shows two works in progress (I'm going to add embroidery or applique to them later - I'll post the finished pix later). 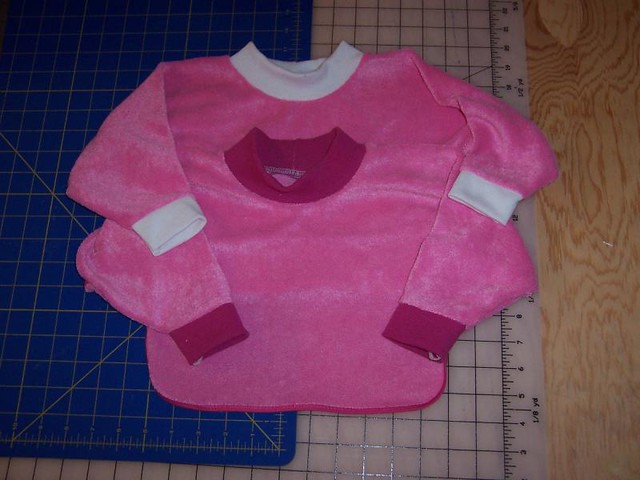 These are made from stretch terry cloth that I purchased at JoAnn Fabrics in the bargain section. The neck and cuffs are ribbed knit and the "raw" edges are covered in regular seam binding in coordinating colors. I'm really enjoying this project! I've been stitching the binding with my sewing machine, but I'm using my serger to stitch the cuffs, collar and sleeves, and using woolly nylon thread for the first time. So far, it's been great. But now I need/want it in more colors than just white and ecru!

The only problem I had with my very first sleeve saver was that I stitched the cuffs with too wide a seam, so that even the tiniest hand wouldn't fit through it. Now, I'm making them all with a narrow seam with lots of room for big and little hands. They are supposed to fit ages 6mths up to 2yrs.

I have big plans to make lots more of these for all the "under-two" crowd in various themes and colors. Of course, I have blue stretch terry and orange ribbing ready for Mets-themed bibs. I'll post pix of those when they are finished.

I have not actually started Emily's birthday gift yet, but should get it going by the end of this week. She will be turning 4 in August and I am told she is having a "princess pool party". I have a couple of weeks to decide what to make and knock it out (it could very well be another backpack). She did tell me last month that her favorite colors are purple and red. I'm sure I'll be working on whatever it is right at the last minute, as usual!
Labels: Baby and Kid Stuff Bibs-Burps-Blankies Machine Embroidery Sewing