Over on Keli's Korner, I shared the first batch of Patriotic Pups Dog Collar Slipcovers I made for Memorial Day and Independence Day, 2011.

The dog collar slipcovers in this collection were made based on designs by Penny Sanford Designs and are sold with permission - a portion of the sales are going to be donated to Westie rescues.

To wear them, we slide the collars through a casing (kind of like putting a curtain on a rod) and our old plain collars are all dressed up for the holiday. There's a buttonhole near the end of the slipcover where the D-ring for attaching the leash slips through so we don't have to take off the slipcovers to go for a walk. It also helps keep the slipcover from sliding around on the collar. 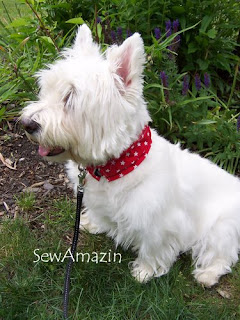 Most of the Patriotic Pup slipcovers in the first batch were made with White Stars on Navy fabric; this batch features the complementary White Stars on Red fabric with white accents.

Keli is modeling the first two - the simple Straight collar slipcover (right) and the Ric Rac slipcover (below). 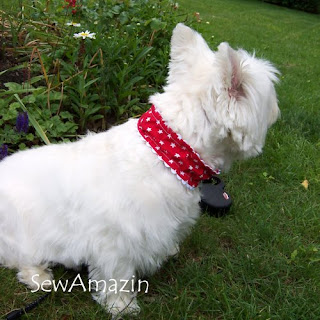 Both the Straight and Ric Rac styles are about 1 or 2 inches longer than Keli's 16 inch collar, so there isn't a lot of ruffling going on. Worn on a shorter collar, there'd be a lot more gathering. 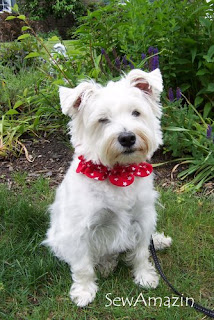 Here's Penny wearing a red scalloped slipcover with 5 scallops. It's about 18 inches long, which is 4 inches longer than Penny's collar, so there's a nice ruffle effect. This style is also available in a 6 scallop version which is about 21 inches long.

The plain Navy version of the Scalloped slipcover was featured in an ArtFire Collection called Hooray for The Red, White and Blue. 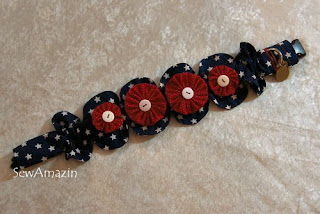 For Memorial Day, I added 3 red yo-yo's to the Navy 5-Scallop slipcover, to represent poppies. I know, poppies probably should have dark centers, but the white buttons looked better!

That Scalloped slipcover updated with Red Yo-yo Poppies (modeled by Penny on Keli's Korner) was featured in an ArtFire Collection called This Dog's For You.

I received an order for the same style in a 6-Scallop slipcover, so I added 4 red yo-yo poppies.

Here's Penny again, modeling a reversible Triangle/Bandana style slipcover. One side has the White Stars on Red fabric, and the flip side has Baseballs on Cream, so you get two looks to wear all year 'round. Doesn't she look like she's laughing in the baseball photo! She's such a ham sometimes! 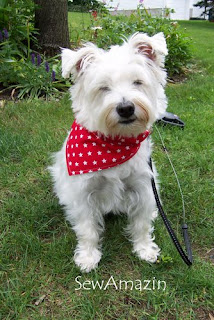 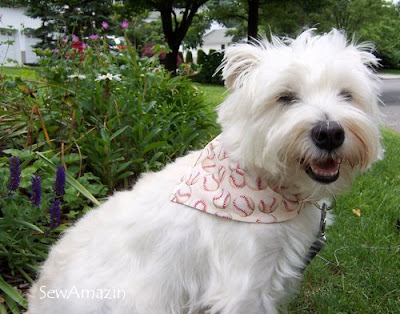 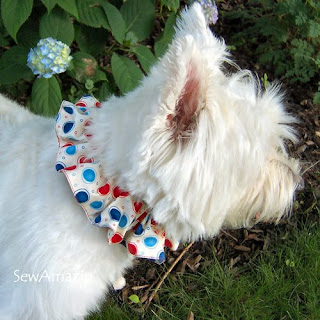 A few years ago I made some simple, scrunchie style neck ruffles for Halloween. I thought I'd make some to go with this Patriotic Pup collection, since not everyone would want a collar slipcover. These are made with elastic and slip easily over the head. The size is based on the dog's collar size, or one or two inches larger than their actual neck measurement.

Keli is modeling the first one, Red & Blue Dots on Cream. The actual ruffle width is about 2.5 to 3 inches wide and it is sized to fit a 16 inch neck.


Shortly after I took Keli's picture, my camera broke, so that's the only "glamour shot" I was able to take that day! Luckily, I took flat pictures of the ruffles before we went outside.


Below, left is another view of the Red & Blue Dots ruffle. On the right is one made in a Denim Paisley print with red, white and blue patriotic accents; I have two sizes made up so far - 14 inch and 16 inch - but can easily make a custom size for smaller or larger dogs (or cats!) 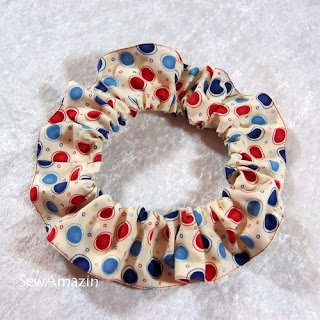 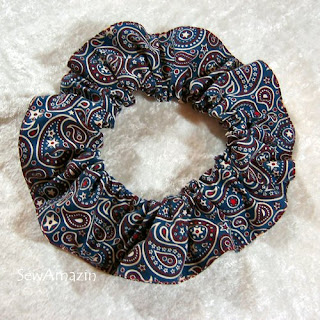 Below left is made with an American Flag Medley and is also available in two sizes; at right is the familiar White Stars on Red, in the 14 inch size. 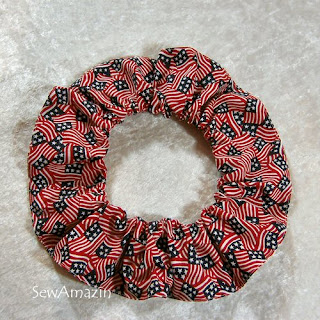 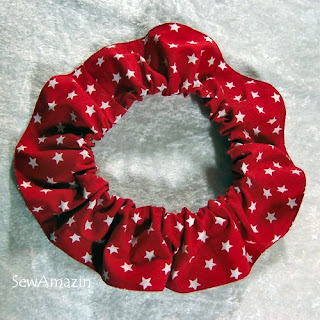 I plan to make more of these Scrunchie Neck Ruffles in simple and fancy styles for the holidays.

If you'd like to see all the pictures from our photo sessions - even the some of the silly out-takes - they are in my Dog Collar Slipcovers & Scrunchie Bandanas and Dog Scrunchie Neck Ruffles sets on Flickr.