I am officially removing this from my UFO list and am considering it finished, even though there's a little jacket that's not quite done. It's time to finally share the story about this little guy.

The last time I wrote about this project was in February 2008. A few weeks before that, I'd written about some crochet and knitting projects that inspired me to pick up this long unfinished Westie pup. 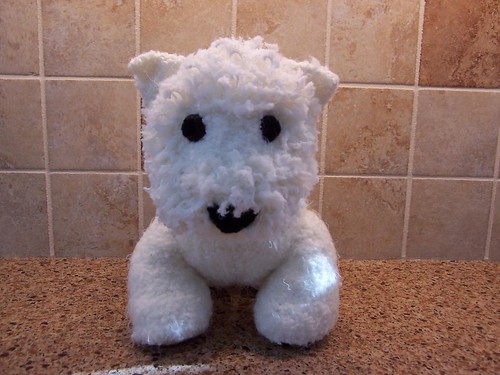 This knitting design is Alan Dart's Perfect Pups Westie pattern, a leaflet I purchased on eBay in early 2002, shortly after our first Westie girl, Wyndi, had left us for the Rainbow Bridge. Even though I'm not a frequent knitter, I just could not resist the cover photo for this pattern and I had to at least attempt to make this little Westie pup. (This OOP pattern can be found on Etsy or eBay listings or as a PDF on Alan Dart's UK website.)

It took me a few weeks to find the yarn supplies and I made a number of substitutions. I could not find the Sirdar Snowflake yarn, so the body of my Westie is knitted using Berroco Plush.  The ears, feet, nose and eyes are knitted using Plymouth Yarn Dreambaby DK yarns in appropriate colors. 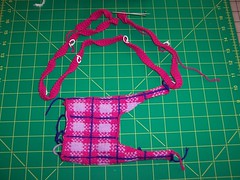 Each of the body pieces were finished fairly quickly. Before too long, all the parts of the Westie were complete and I was working on finishing the jacket.  Of course, at the time, I had to change all the colors to pinks and purples for my Wyndi.

Around the time I was working on the knitted pup, we brought home our new 8-week-old Westie puppy, Keli Angel and all knitting, sewing and other crafting projects were put aside while we enjoyed all the excitement and commotion that having a new puppy in the house creates.  And then six years passed before I picked it up again.

I still can't believe that so much time had passed -- and it wasn't due to a lack of interest or time constraints.  I was very motivated to finish this puppy.  So what kept stopping me?  That silly little jacket.  Or rather, the edging for the jacket -- it's a 4 stitch ribbing that's knitted separately and is supposed to be attached to the main part of the sweater and I just can't make it work.  I've stitched it on and ripped it off at least twice already.

In January 2008 I decided to forget the sweater and focus on putting the Westie body together. 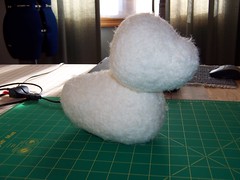 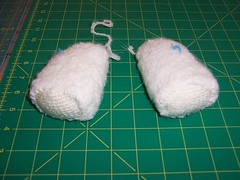 It wasn't long before it started looking like a real Westie: 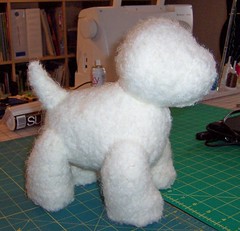 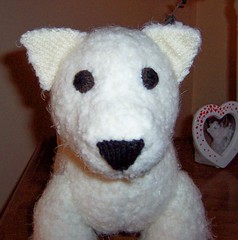 The pattern photo was a fair guideline for shaping the body parts, but I used my own in-house Westie model to get the details just right.  As I was stuffing and shaping each body part, I found a few spots where I dropped a stitch -- remember, I never claimed to be a great knitter -- I just stitched up any holes or loosely knitted spots with pieces of the Plush yarn and buried the loose ends inside.

The last remaining step was to add strands of yarn around the head to create that famous rounded Westie head.  And that's around the time when Penny joined our pack.  She was a five month old rescue puppy with no manners whatsoever, and once again the knitted puppy was put away for safekeeping.  Now, at 2-1/2 years old, she's still quite a rascal, but she has learned to behave nicely when I'm working on projects (she chews her own toys, not my supplies -- most of the time).


Last November (during the kitchen renovation), I pulled out this knitted Westie to work on for a day and managed to get most of the headpiece finished.  But it wasn't until I started working on other yarn projects for this year's Stitch N' Pitch that I decided to put this puppy to rest once and for all.

I wasn't able to get a big, full round head, but I think it approximates the look of a pet Westie head - or at least it looks a lot like my girls. 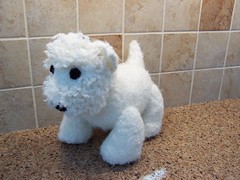 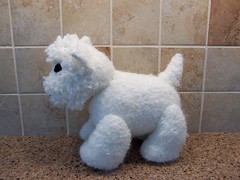 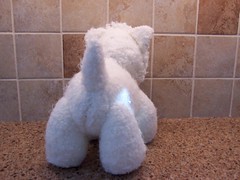 That tail makes me giggle - it almost looks as if it's waggin!


Oh, I almost forgot -- the pattern calls him Wesley, which I think suits him. And Keli keeps telling me that Penny was supposed to be a little Westie brother, not a Wauzer sister. So he's a boy and his name is Wesley.  That pink jacket won't work now anyway.

By the way, I've joined Ravelry now.  I don't know how much I'll be hanging out there, but it looks like a great place for inspiration and help, in the same way that PatternReview is a great resource for sewing. To find me in either place, look for sewamazin.