April 30, 2010
Still catching up on posting projects; at least I'm working on the current year now! 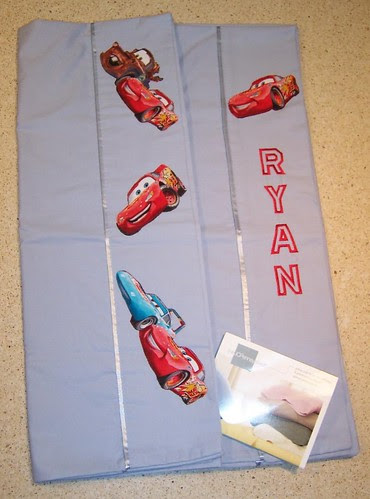 January was my nephew Ryan's 3rd birthday. Have I mentioned that he is a fan of Disney's Cars??? Maybe once or twice ....

To go with his quilt and fleece pillow, I thought I'd embellish some purchased pillowcases with more bits and pieces of leftover Cars fabrics.  There were just enough fabric scraps to cut out a handful of characters.  I used leftover pieces of Steam-a-Seam light sheets to fuse the cutout characters onto the pillowcase side hem, then zig-zag stitched around the raw edges using invisible thread.

On one of the pillowcases I machine embroidered his name on the hem, using one of the fonts in 4D Embroidery.  I undid the seam first, so that the back of the embroidery would be hidden inside.

In addition to the pillowcases, we gave him a gift card which, of course, had to be wrapped in something special, so I made this gift card holder: 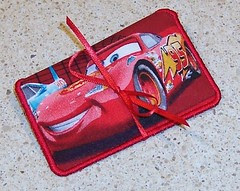 It's a modified version of one of the designs included in Embroidery Library's In-the-Hoop Christmas Gift Card Holder design pack.  I used more leftover Cars fabrics and skipped the Christmas greeting steps of the embroidery design.  I remember putting a snap closure on the flap, which didn't go on perfectly straight, so the holder is a bit wonky.  But I don't think Ryan minded a bit.
Baby and Kid Stuff Cars Machine Embroidery