Well, it looks as if the last time I recorded a finished project here was back in August 2009 ... I can't believe it's been that long!  I'm going to try to catch up a couple of projects at a time.

First up, some gifts for my newest nephew, RJ, born late last September.  I made a couple of diaper burp cloths, bibs and minkee and flannel blankets.  One set featured sea turtles: 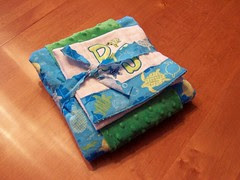 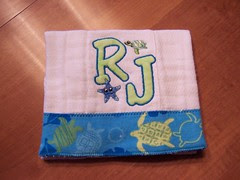 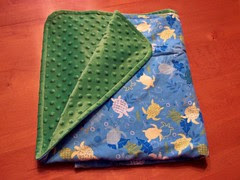 The initials are machine embroidered appliqués and the starfish and sea turtle embroidery designs are from Embroidery Library's Baby Nursery Design Pack.  They may look familiar; I've used them on other baby items.
I forgot to take photos of the second set, but the fabrics I used are below: 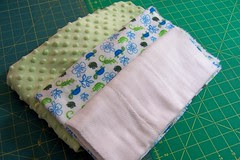 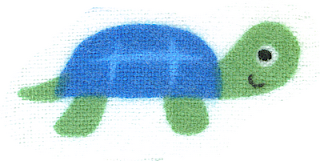 For the second set, I scanned the turtle, enlarged the image and then used it as a pattern to make an appliqué stitched onto a pre-made bib.  I thought it turned out really nice, and really wish I'd remembered to take a photo! 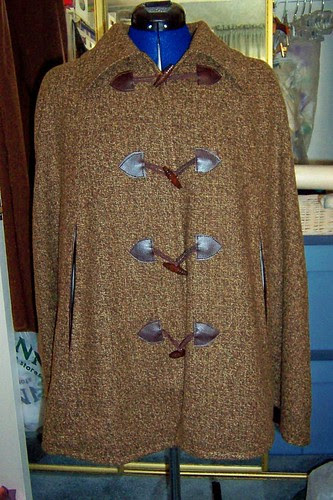 Luckily, I wrote a review on PatternReview.com shortly after I finished this one, because I don't remember all the details now. To see more photos of the cape, visit my Garments Set on Flickr.

Here's a recap of my review:


Pattern Description: Pattern envelope includes a lined Cape with or without collar and toggle closures as well as a vest, scarf, hat and bag

Did it look like the photo/drawing on the pattern envelope once you were done sewing with it? I made the cape View A with the collar and toggle closures and yes, it looks very much like the photo.

Were the instructions easy to follow? This was my first experience with a New Look pattern; the instructions seem a little less detailed than some other brands. They were concise and logical in the order of construction.

What did you particularly like or dislike about the pattern?
Like: I really like that the only area I needed to fit well was in the shoulders.
Dislike (minor): the pattern calls for toggle closures but does not include instructions for making them. I could only find knotted frog closures locally, so had to figure out a way to make my own toggle closures.

Fabric & Supplies Used:
Polyester/Rayon blend woven tweedy fabric from JoAnn Fabrics' Indian Summer "collection", I used the 'wrong' fuzzier side of the fabric as my 'right' side, so it looks a bit wooly. I opted to use Brown Zeus lining and I'm so happy I decided to use this instead of a lighter weight lining.

The closures were made from purchased wood toggle buttons, loops were recycled cording saved from Bare Escentuals shopping bags, and the 'appliqués' (or whatever they are called) are faux leather. close up of closures

Pattern alterations or any design changes you made:
I measured the pattern waist and lower edge circumferences before cutting and found the difference between size 12 and the largest size 18 was less than 2 inches, so decided to test the size 12 in muslin. The shoulders fit nicely but I lowered the arm openings about 1.5 inches which felt more comfortable.

I'd like to add a button-on hood if I can find the time -- I'd have to copy a hood from one of my RTW coats for size and placement, though.

Conclusion:
Overall I'm really happy with the way the cape turned out. This is my first attempt at real outerwear, and I consider this somewhat of a practice piece before attempting a coat.

I don't know if capes are in or out of fashion right now; I made this one to have something a little nicer for running errands and quick and easy to put on when I have to take out my two terriers on a chilly day. For really cold weather, this would need a heavier lining/underlining (or a big sweater).

At the end of October, I worked on this mini quilt, Westie Halloween Treats: 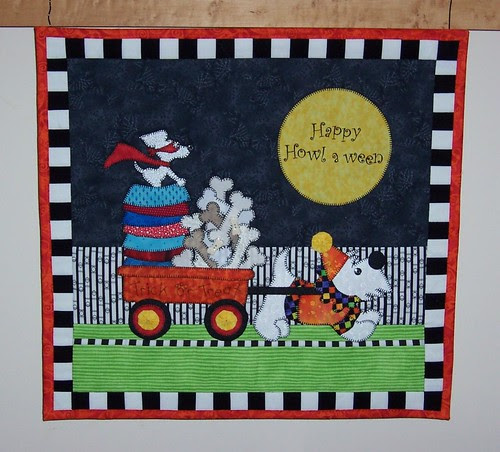 The pattern for this appliqué mini quilt can be found at FreePatterns.com; the link can be found on my Westie Quilt Pattern Links page. The original design features a Scottie and Chihuahua, but I made a few changes so that they resemble my Westie and Wauzer, Keli and Penny.
The larger dog pulling the wagon is Keli, and I added a black button for her eye.  The smaller dog is Penny; her nose is another button and her eyeball is a french knot. I digitized and machine embroidered the text on the moon and side of the wagon. The pile of bones in wagon includes a few ceramic bone buttons from my stash. The yellow circles on the wheels and Keli's hat are fabric yo-yo's. Each appliqué piece was fused to the background with Steam-a-Seam light, then blanket stitched around the edges by machine. I quilted in the ditch along the borders. The details are visible on the original size image.
*********
That catches me up through October 2009; in November we began the kitchen remodel, so I was only able to work on a few other items for Christmas.  I'll include those in my next post.
Labels: Baby and Kid Stuff Bibs-Burps-Blankies Garments/Wearables Jackets-Coats-Outerwear Machine Embroidery Quilting Sewing Westies