In March I started working on a few pairs of pajamas. I didn't have a photo of the first flannel pajama pants (Simplicity 3928) until now -- here's the flannel fabric that reminded me of a tablecloth: 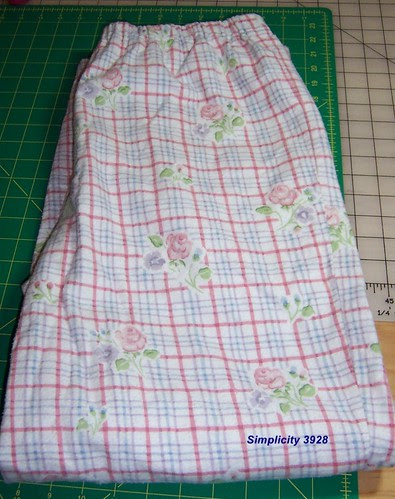 I don't know what I was thinking when I first bought this fabric -- it had to be at least 10 years ago. These are pretty basic elastic waisted pants, and this fabric was good enough for making a wearable practice garment.

After working with flannel, I decided to try some cotton knit fabrics and a different pattern, Simplicity 5877: 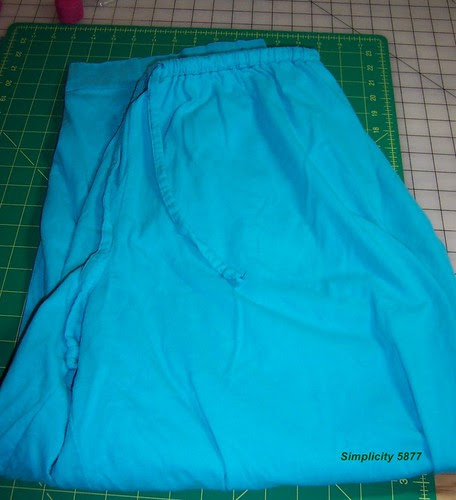 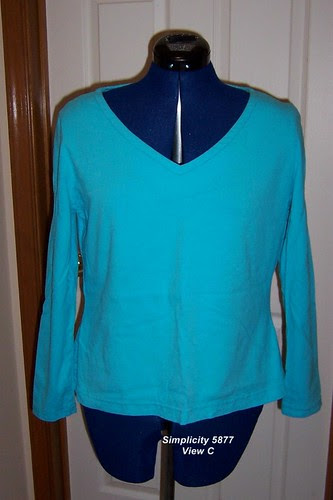 This pants pattern is different from the other in that instead of a front and back piece, there is a single pattern piece cut through two layers of fabric, one for each leg. The only seams are at the inner leg and the center. The assembly was actually quite easy; I sewed the pieces together using a stretch needle on my sewing machine, then finished each seam with an overlock stitch on the serger.

The waistband construction was also a little bit different this time. Before making the casing for the elastic and drawstring, fusible interfacing is applied to the inside of the pants at the markings near the center front; then two buttonholes are stitched on either side of the center front seam. The finished buttonholes are used to thread the drawstring through the casing.

I made these pants in a large size with a medium waist, but they are big, so next time I would probably cut a medium and reduce the waist even a little smaller. Also, the legs were really long -- I hemmed up at least 3 inches and they still touch the floor, so I adjusted the pattern piece to shorten the legs that much. By the time I make another version, it will probably be summer, so I'd want them a little shorter.

The top went together easily enough, too. I cut the pieces for a medium size and followed the instructions for finishing the neck with a facing. The only step I did out of order was to sew the sleeves in flat, then stitched the arm and side seam as one step. I finished the sleeves and bottom hems with a coverstitch on my serger. It fits well, but is a little big in the shoulders (as most patterns fit on me). I adjusted the pattern to move the shoulder in about 1/2 inch narrower. I also adjusted the sleeve pattern to remove some of the ease in the cap because it was just a little bit too full.

Here's my second version of this pajama top, incorporating the adjustments: 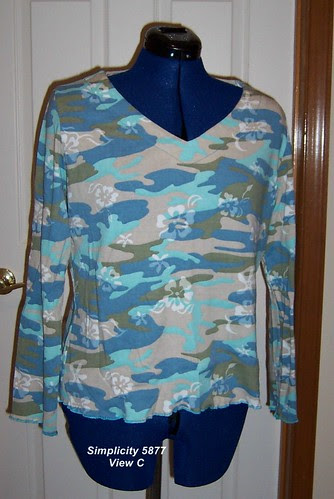 The shoulders fit much better. I finished the neck edge with the facing again, but instead of topstitching near the seam, I topstitched near the facing edge so it doesn't flop around inside. Next time, I'll try to make it so that the facing folds to the outside for a contrasting finish.

For the sleeve and bottom hem, I experimented with a "lettuce edge" on a fabric scrap, using a 3-thread rolled edge on the serger. It was a little too rippled for me, so I decided to use a narrow and short 3-thread overlock stitch and stretched the knit fabric as it fed through the serger. It's just wavy enough for me, but would probably look better with a thicker thread. I couldn't find the right color of woolly nylon, so this is regular serger/cone thread. 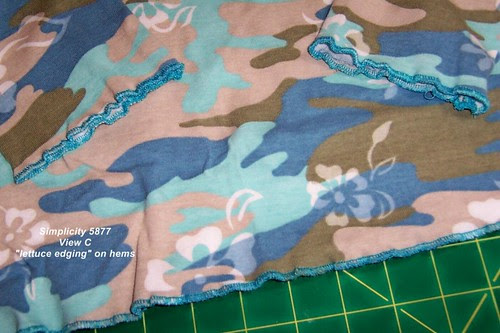 To go with the second top, I tried my original pants pattern again, Simplicity 3928, using an aqua thermal knit: 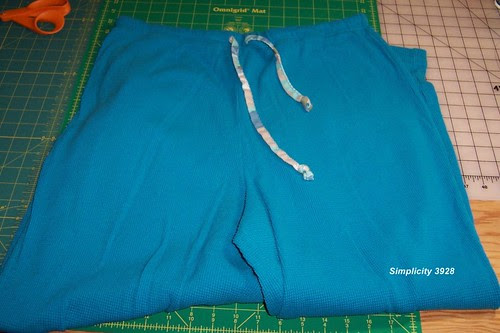 I changed the waistband construction so that it was just like Simplicity 5877, with a drawstring. I should have cut these out much smaller, too, because they are HUGE! This pattern is definitely NOT sized for knits. So I have learned that lesson, too. I can wear them for now, but eventually the bagginess will drive me crazy and I'll have to recycle them into something else. And now I know better.

Before making these pajamas, I had never tried to make anything wearable from knits before, only re-worked some too big Mets t-shirts, so this was a total experiment. It was fun, I learned a lot, got to use my serger and some of the accessory feet for my sewing machine, and I have some new pajamas to wear for a while. And next time I'll do better.