The first time I tried to make this jacket, McCall's M5191, was almost exactly two years ago. After attending a few pattern alterations classes that year, I was eager to use all the information to make this jacket in tan corduroy. My first attempt wasn't too bad, but it was big in the shoulders and long in the arms, and I'd had some problems finishing the buttonholes. But it was wearable and I'd always wanted to make another version.

I finally got around to making it again, this time in white bottom-weight denim: 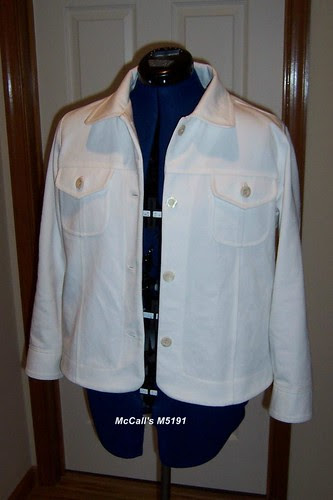 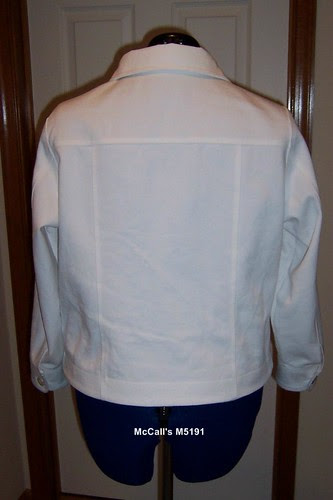 In the two years that have passed since completing that first jacket, I've learned how to make better pattern adjustments as well as how to use the sensor buttonhole foot properly. And I took the extra time to read the reviews of this pattern at PatternReview.com and found more than a few good tips.

One of the PR tips suggested assembling the various sections as units instead of following the sewing order of the instructions, so that all the topstitching could be done at the same time. This worked well for me; I assembled the pocket pieces, the front/side fronts, back/side backs and sleeves by sewing the seams as indicated, finishing the edges with an overlock stitch on the serger, then two rows of topstitching on each piece.

The collar, cuffs and pocket flaps were also done at the same time, following similar assembly-line construction. To topstitch very close to the edges of these pieces, I used a left edge topstitch foot, then a regular foot for the second row of topstitching.

I goofed in a couple of places -- pressed the seam and topstitched in the wrong direction a couple of times. I won't point these out, unless somebody notices. 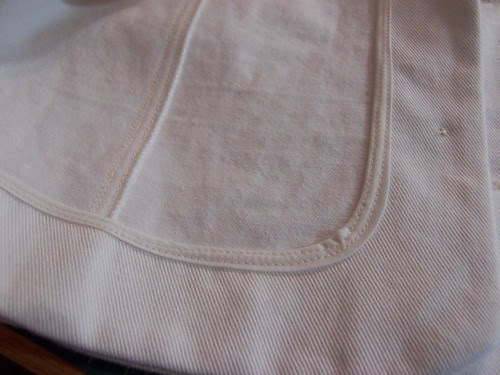 Another great tip from one of the PR reviews was for finishing the edge of the facing pieces with seam binding. At first I tried serging the edge, but did not like the results on the inside corners. It was just too choppy, so I tried the binding method and it turned out well enough. I just happened to have a package of white single-fold seam binding in my stash. Next time, I would take more time to sew it more accurately and I would probably try to use an extra-wide binding, just to make it a little easier to work with and for a neater appearance. Since this is on the inside, I'm not too concerned with a few uneven stitches - this time. 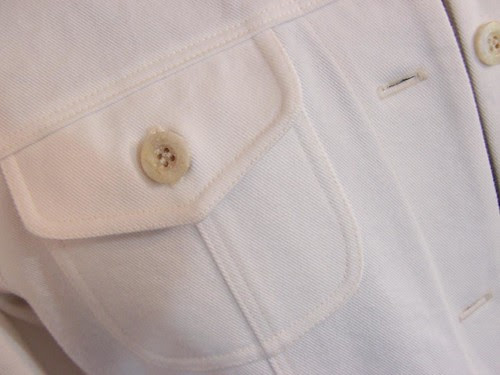 The buttons were in my stash from some long abandoned and forgotten project. Since I used an eggshell/off-white thread for the topstitching (bright white was TOO white), the color of these buttons is just right.

I had a lot of problems making the buttonholes on the first jacket; I later discovered that I was using the sensor buttonhole foot incorrectly and I neglected to use any stabilizer underneath while sewing the buttonhole.

This time, I lined everything up properly *and* I used a scrap piece of medium weight tear-away stabilizer (saved from one of my machine embroidery projects) and each and every buttonhole stitched out perfectly.

Another tool that I've added to my collection since the first jacket is a buttonhole cutter. It works like a dream, as long as it's lined up properly to cut the fabric and NOT the stitched buttonholes. All I can say is thank goodness for Fray Check. 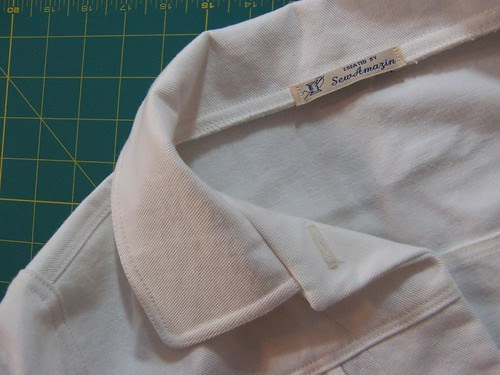 After all the buttonholes were finished and the buttons were attached, I decided to add one of my labels to the inside of the collar. Would you believe there's a utility stitch built into my sewing machine that does this perfectly? I think it's meant to be used for attaching belt loops.

This version of the jacket fits me better, but I may have shortened the arms just a bit too much. It is just right for wearing this spring/summer over a t-shirt.

Now that it is finished, I've got a few plans for embellishing it with some swirly machine embroidery on the front and back yokes. I've printed out a few templates on vellum to experiment with the placement, but I'm not sure about the thread colors yet: 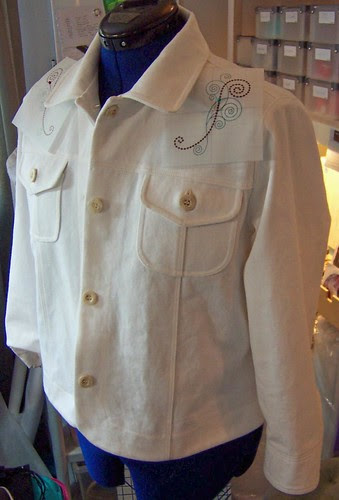 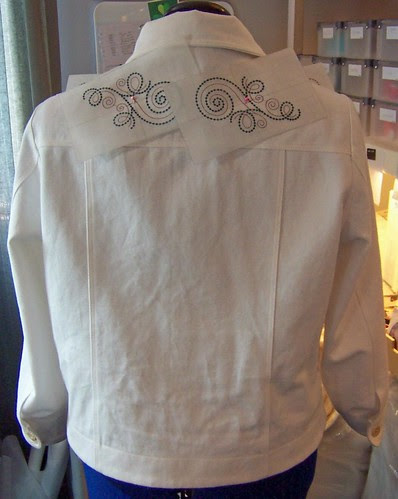 Of course, I'll have to stitch a few samples before I make any decisions. It could be mid-summer before I get around the embroidery.