A few weeks ago, my brother Bob and I had this conversation (or something like it):

First, he asked me if I could embroider on t-shirts. Well, I replied, I haven't done too much embroidery on t-shirts yet, but I'm sure I could do it, what did he have in mind? Well, he said, can you do lettering? Sure, I said, what kind of font do you want? Well, he replied, can you stitch our logo? What's your logo? It's a lion fish . . . just like the image on my business card . .

That's where it got interesting.

He works for a smallish company called Westport Aquarium. The employees wanted new t-shirts and it didn't seem like anyone was working towards getting them, so he was trying to show some initiative by getting me to stitch some really cool shirts. But the lion fish logo was more of a graphical representation of a lion fish, not a true photo-like image.

Well, I hadn't tried digitizing anything from scratch since my last class a few months ago, and now that I'd upgraded my software to the 4D Professional, I thought the new "design wizard" should be able to handle this image: 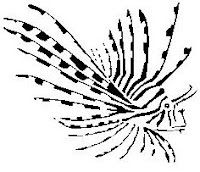 I scanned his business card at a low-resolution 150 dpi, cleaned up the .jpg to delete all the "dirt" and unnecessary sections, then I tried the wizard. I got a mess. I tried changing all my preferences and tweaking all the various options. I still got a mess. So I re-scanned the image at a higher resolution, 300 dpi, thinking that since it was so tiny (less than 2 inches) maybe I'd need a higher resolution to get better results. I cleaned up the image again, then I converted it to a .png image. I again tried using the wizard . . . it was still a mess.

I decided I'd have to use all the knowledge I should have acquired from my months of digitizing classes and do it myself. I started out trying to use various applications of the satin stitch features . . . still nothing good. Then I thought maybe I was thinking too small . . . I was trying to digitize a 1.5 inch design and getting blobs of stitching. What if I designed it to be 100mm wide, then re-sized it down to the appropriate size later. So I tried to digitize it bigger, still using satin trace features. Still getting garbage.

What if I tried using a fill pattern instead? So I tried that, and section by section I created a fill pattern. That didn't look half bad. The fish's eye was a round circle on the original image; I figured I'd never get anything that small to work, so instead I used one of the machine fonts to create a dot, which I dropped into the proper place. It looked pretty good. What would happen when I tried to shrink it down, I wondered. So I reduced the entire design by 50%. Guess what happened . . . the result almost looked like tiny little satin stitches. Hurray!

So I did a quick sample stitchout to show to Bob; he was pretty pleased and took it to show his co-workers, who apparently were similarly impressed. Then I took home a sample of the shirt he wanted me to stitch on -- a polyester/lycra blend. And I went to town creating various combinations of the lion fish and text. That was another bit of creation on my part -- he wanted the same font as his business card. The closest match I could come up with was a monotype corsiva, a script font which I used the Quickfont function to create. In the end he decided he like this combination best: 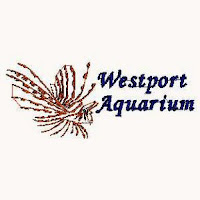 In the interim, someone else *had been* working on getting them shirts, but silk-screened and on some other type of shirt. They hadn't been ordered yet, so he asked me to put a cost estimate in writing that they could compare to the silk screened option. So that's where we are at now -- I'm waiting to hear if they want the embroidered shirts or if they're going to go with silk-screened.

The funny thing is, a few days after Bob initially asked me if I could do this, I received email from my SIL who was writing to ask I could do shirts for the kids at the daycare where she works. They want some big letters on the back of the shirts and their logo on the front. I received a .bmp image of the logo (looks like a child's drawing of a rainbow with a sun peeking over it). I've tried using the design wizard on this also . . . still getting mush. So I'm going to have to flex my digitizing muscles again and do it myself, a section at a time. I'm pretty sure I'll be able to do it successfully. I just haven't had enough free time to spend with it yet.