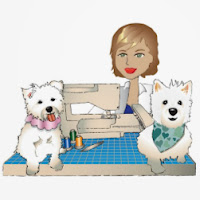 Hello again! Today is my 10th Blogoversary - it's been 10 years since I started posting about my sewing and crafting projects on Blogger!

This blog is where I keep track of and "show and tell" my sewing and needleart projects and experiences, kind of like my virtual scrapbook.

Over the years, I've taken some extended breaks for several months at a time. My latest break has spanned 2.5 years, from January 2015 to June 2017.

What happened? A few things contributed to the break. First, in late 2014 I launched a separate blog, SewAmazin's Studio, dedicated entirely to my shop news and promotions, so that this original blog could focus on sewing and creating, not selling. Most of my posts from 2014 through 2017 are over on my Studio blog.

Second, our Westie, Keli had a couple of surgeries, in November 2014 to remove a benign anal gland tumor and again in August 2015 to repair a torn ACL. They were a little risky for a senior dog, but she did great! In fact she just had another surgery this month to remove more growths, including a nasty one on her nose that turned out to be low grade malignant. The vet was reluctant to put her under anesthesia again at age 15+ but once again, she came through just fine and is expected to make a full recovery. We expect her to be with us for a few years longer.

2015 was not a great year for us. My father was diagnosed with lung cancer and lost his battle in August. In September 2015, I was diagnosed with breast cancer and while I was going through various treatments and surgery, I just didn't have the energy or inspiration to be very creative. I developed mild neuropathy in my fingers and toes and lost all of my nails as a side effect of chemotherapy, making it nearly impossible to sew for quite some time.

My last radiation treatment was in September 2016. My overall recovery has taken longer than I expected and I still have some challenges, but I'm finally getting back into my workroom to sew again!

During my hiatus, I popped in periodically to do some blog housekeeping - updated broken links, tried on a new theme, re-worked my finished project lists....

There are still lots of older projects that never made it to the blog and at this point, I'm not going back to add them unless they are relevant to something new. The photos are all uploaded to my Flickr account. There are a few draft blog posts from 2015 and earlier that I may or may not share in the future.

So here we are, wiping the slate clean and starting new on my 10th Blogoversary!

I already have a couple of new blog posts drafted in my mind! I have started working on some of my old unfinished projects, as well as started some that I had planned to do 'one of these days'  - because enough time has passed already! I make no promises to blog on any kind of schedule. In fact, I can guarantee that my posts will be sporadic. But I will start posting again.

My SewAmazin shop and website are up and running and I've added new dog bandanas for summer, but I do hope to balance my 'work' sewing and my 'personal' sewing better this year. And I'll be spending more time with my "Pesties" - both Keli and Penny (who will be 10 in September!).

If you subscribed to this blog by email but wanted shop news instead of sewing updates, you can join my other mailing list at: Subscribe.SewAmazin.com visit SewAmazin's Studio blog