This is another long post in the series catching up on 2012.

I had resisted buying these embroidery designs for a while because I thought that owls had come and gone out of style. I was clearly wrong! The last several months of 2012 seemed as if they were dedicated to making owls!

All of the owls in this post were made using in-the-hoop machine embroidery designs from Embroidery Garden. 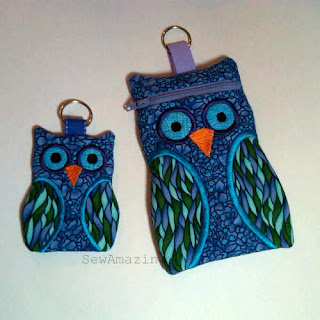 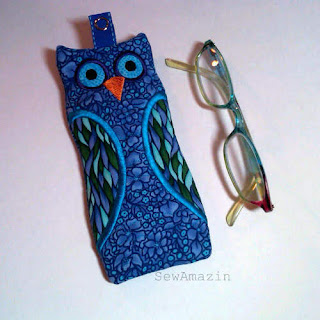 The gift card holder and eyeglass case were given away as gifts. The small zipper case was the fabric inspiration for a the large zipper case (below).

These various owl themed zipper cases were all made in preparation for my first fair last October. I made several of them in matching sets. One by one, most of them have found a new 'nest' to call home. 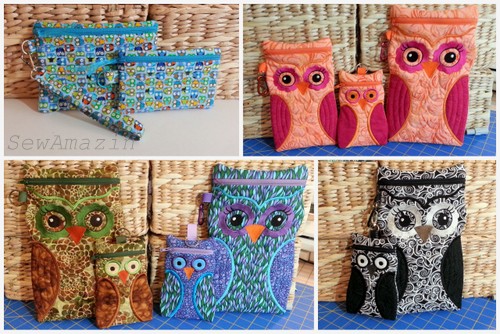 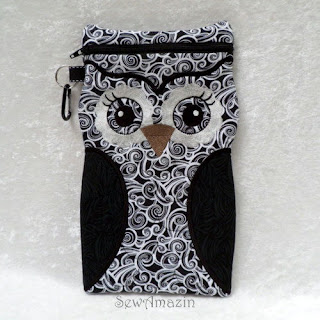 This large Owl shaped zipper case is sized to carry smaller tablets and e-readers like the iPad Mini and Kindle Fire. It can accommodate other devices up to about 6x9 inches.

The owl is padded with cotton batting; he stands about 10.5 inches tall, with about 9.5 inches from the zipper to the bottom. The narrowest point at the neck is just over 6 inches wide; the black nylon zipper opens about 6 inches across.

Several of these Mini Retro Owls quilted wristlets in two sizes and made of coordinating pink and blue colorways: 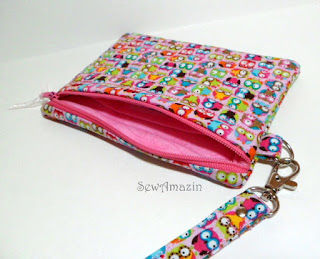 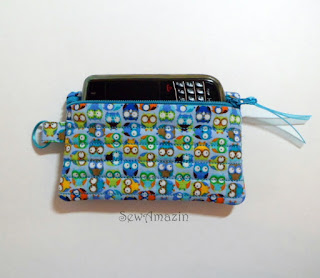 At the end of October, I stopped by The Cozy Quilt Shoppe for the last time before they closed up the shop. During the visit, the conversation about owl cases led to questions about owl purses. I hadn't had time to make samples of all the various designs before or after the Adorno fair in mid-October, but since I had my lovely new Android smart phone with me, I was able to show them the designs online and take custom orders to make these wristlets with owl faces for three of the girls. 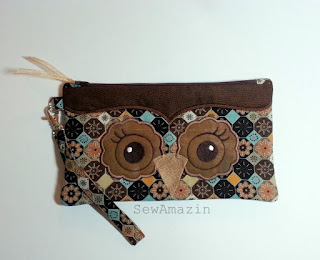 I had only color suggestions to work with in choosing fabrics. This larger wristlet was requested in brown and tan so I tried to keep it somewhat neutral and earthy. I liked the little bit of sky blue in the fabric. 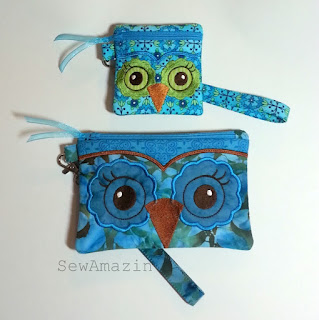 The smaller wristlet was requested in blues and greens and the medium in the blue and brown batik fabric.

Each one has a removable wrist strap with a swivel clasp that attaches to a small d-ring.

I didn't have an opportunity to work on these until mid-November because the day after our visit, Hurricane Sandy made it's way through New Jersey and left us without power for about 5 days. I did finally have them finished and delivered in time for the small Christmas craft fair we attended on December 1st. 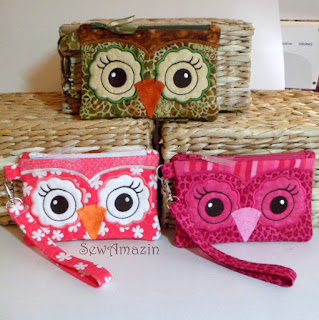 In December, another CQS friend asked for three medium size wristlets; one to keep and two to give away as gifts.

One is made in earthy greens and browns and the other two are made in slightly different pinks.

The one she wanted to keep had to be REALLY PINK, so I picked the animal print, stripes and eye fabric in multiple shades of pink. I even stitched the beak in pink thread! The lining is a pink and black hounds-tooth print with skullies. 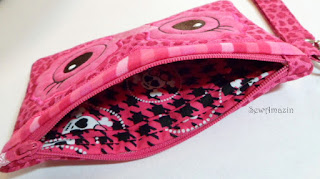 These owl-face wristlets are not listed in my shop, but they can be made upon request.


The Owl-a-palooza didn't end with the wristlets! I made up a couple of sample owl shaped sewing kits, which led to an order for an entire parliament of owls, all in different colors to be given away as Christmas gifts.

Some of the fabric combinations will look familiar, since I used the wristlets and zipper cases for color inspiration. I began with bright oranges, pinks and peaches, then moved on to blue, teal, green and purples. 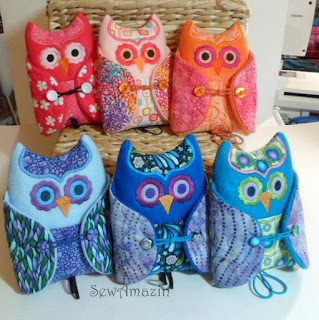 The stuffed owls have a divided pocket on the belly for keep sewing necessities like small scissors or a seam ripper. The open wings can keep track of sewing needles and pins; when closed they keep everything tidy. I used colored hair elastic and small buttons for the closure.

Two spools of thread are supposed to be held by elastic loops at the bottom to allow the owl to stand up. (I didn't provide the thread spools for this batch.) 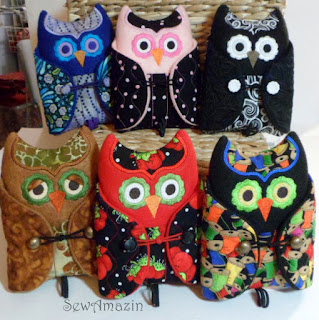 The owls in the second half of the flock were made in darker colors, black and white and earth tones. Two of the owls were made in sewing-related prints with tomato pin cushions and brightly colored thread spools. I experimented a bit and gave one of them 'sleepy' eyes.

These were all finished and delivered around mid-December.

Some of the owl sewing kits can be found in the pin cushions section of SewAmazin's Studio shop (or can be made by request.