Slipcovers: the Plan and some progress

January 31, 2009
I've pretty much finished Joseph's 2nd birthday gift, but I won't be writing about it until after his February birthday.

Next up on my project list are slipcovers for my 10+ year old couch and ottoman, which I've wanted to make since -- forever. 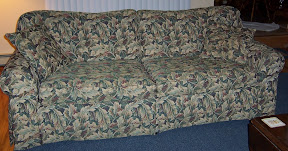 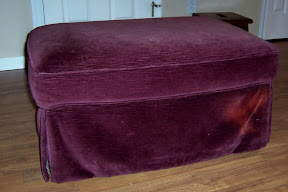 I've been changing over the color theme in our "great room" little by little from the green/red/gold combination of colors in the couch to more blue/off-white/beige with red accents. My "inspiration piece" is this set of red, white and blue storage boxes: 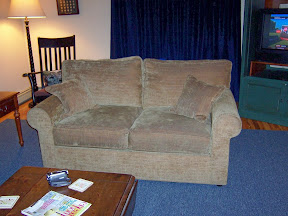 So far I've changed the rug and window coverings to blue and a few months ago we bought a new couch and love seat in a more neutral golden caramel brown (photo, left). At first we were going to give away the old couch, but after living with the extra furniture for the last few months we've decided to keep it.

Our original configuration was a little too crowded; we kept both the old couch and chair and the new couch and love seat all in the same room for the holidays. We've since moved all the pieces around and have come up with a less crowded layout that works for us and provides a lot more comfortable seating for when we have company. Now, a new blue-ish slipcover for the couch has become a higher priority.

A few years ago I re-covered these cushions on a pair of chairs in our "Westie Wing" (known in most homes as the "formal living room"): 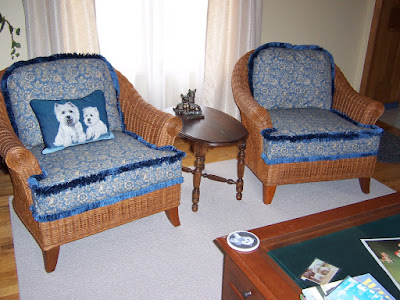 The fabric is called Miss Kitty Denim. The blue and khaki print is just whimsical enough for me and not too feminine for Rich. The name makes me giggle too -- especially since Keli goes bananas anytime she sees a cat or hear's the word kitty. I got a little silly and sewed these cushions with blue fringe in place of piping.

Anyway -- I had about 5 yards of this fabric left over after recovering the chair cushions, and since I like this fabric so much, decided to test it out in the great room as a potential fabric for the new slipcover for the old couch. We all liked the combination, provided I could find a *lot* more yardage. I had some doubts I would be able to get more after so much time had passed -- usually when I finally make up my mind on a home dec fabric, it's been discontinued (which is one reason why I haven't gotten around to recovering the couch until now).

Fortunately, I was able to get to a JoAnn Fabric store not too far away in Middletown, NY, where they had almost a full bolt of our Miss Kitty Denim on sale at 50% off. And I had a coupon for an additional 10% off home dec fabric, so it was definitely worth the trip and now I have all the supplies I think I'll need. It has been a few years since I've made a slipcover, so I decided to start with the ottoman. You can see some discoloration on the skirt in the photo at left and at the top of this post (the spots are more exaggerated in the photos than in real life); also the top cushioned section is a little lopsided and wonky from 10 years of use.

I never minded the discoloration because the spots were caused by our first Westie, Wyndi. She was blind her last few years and walked alongside all the furniture to feel her way around the room; I think some of the medications we used to treat her skin problems must have rubbed off onto the skirt of the ottoman and the matching chair (which has been relocated to a corner of the dining room for now).

Now that the "great room" has a more dominant blue color theme, the ottoman needs a makeover. I wanted to use a blue corduroy-type home dec fabric from my stash that coordinates with the Miss Kitty Denim, but I had only about 1.5 yards left from the original remnant pieces in my collection. I thought I could squeeze just enough out of that to make the ottoman slipcover. I was wrong.

Carefully, I cut all the main pieces -- the top, "boxing strip" side panels and the skirt sections. I didn't have enough fabric to make as deep a box pleat for the skirt as I would have liked, so I pieced together the inside of the pleated sections. I knew the skirt might also be a little bit on the short side, with maybe only 1/2" allowance for a hem. I used length-wise scraps to make the piping (instead of bias strips).

Unfortunately, I didn't add in any allowance for "ease" and my first pass at assembling the skirt was more than an inch too short. I ended up ripping out the skirt, adding a coordinating blue fabric sashing strip about 3 inches wide and then re-attached the skirt to the sashing strip. That solved the hem allowance problem and gave me just enough of a drop in the skirt to skim the ground. 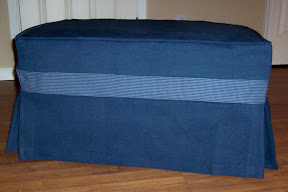 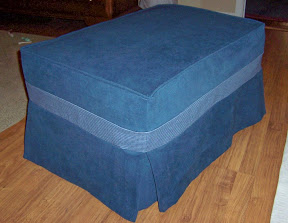 In spite of having to improvise a little, I think this cover turned out rather well, and now I feel more confident about starting the slipcover for the couch.

I'll start with the cushion covers, since they require the most amount of piping. I want to be able to machine wash the slipcovers, so to prevent them from shrinking up too much, I'll be pre-washing and drying the Miss Kitty fabric later this week.

Slipcovers Picasa photo album showing all the before and after photos for this project is embedded below: