I received the following information by email from The Embroiderers' Guild of America: 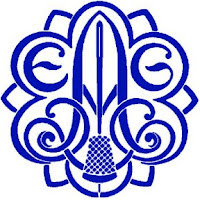 "The Embroiderers' Guild of America will be featured on Antiques Roadshow later this month!

As part of its visit to Louisville (Kentucky), the Roadshow came to EGA Headquarters and took a look at three of our samplers.

While their visit here was very brief, it does give us some extraordinary national exposure.

Louisville Life, a series produced by the local PBS affiliate, KET will air a longer segment on EGA that will focus on our mission, programs, and collection. This program can be viewed on the KET website after its initial air date. Go to http://www.ket.org/ and scroll down to Louisville Life and follow the links.

Antiques Roadshow from Louisville will air in three segments -
* EGA will be featured in the third program that airs at 8pm EST on May 5, 2008.

In New Jersey/New York area the first episode in Louisville #1213 aired on WLIW21 on Sunday, April 27 at 8pm; it's scheduled to be shown again on Friday, May 2 at 1pm. If EGA was mentioned, I missed it, but they showed an appraisal of a silk mourning sampler mid-way through the episode.
Episode #1214 is scheduled to air on Sunday, May 4 at 8pm, Friday, May 9 at 1pm and Sunday, May 11 at noon