I finally have some time to detail the gifts I made for Christmas this year. I posted a slide show of some of the work in progress for Christmas earlier in December. And even though I'm actually publishing this article in January '08, I'm backdating it so it will appear in the December archive and I can actually start the new year with "fresh" projects. This will be a long, photo heavy post!

Just after Thanksgiving I realized there was no way I could finish 12 projects - one for each of our nieces and nephews. So I asked some of the moms what I could buy for the older kids. They gave me very good suggestions and I was able to do most of my Christmas shopping locally in one trip without ever having to go to the "big" malls. I did still plan to make a few gifts for most of the younger ones . . .

First up - the Christmas Stockings: 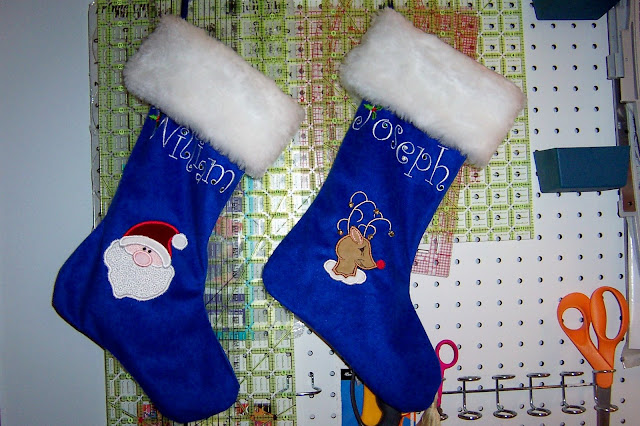 When I asked Sandy what I could get for William and Joseph, she told me she would really like Christmas stockings with their names on them, any color, any theme. So I thought about it for a bit and searched through all the fabrics in my stash and decided I needed to use this bright blue faux suede I purchased as a remnant. The cuff is made of fake fur that I've had since I made Santa suits in 1995 and they are lined with a white satin remnant. The appliqué embroidery designs were purchased from Embroidery Garden and the lettering is a Curlz alphabet I purchased at EmbroideryDesigns.com. I added Swarovski hot-fix crystals to the letters for a little extra holiday bling. You can see close-up photos for William's stocking here and Joseph's stocking here. I like the way they turned out - they're kind of modern, but sort of traditional . . .


Inside William's stocking I wrapped a set of Hot Wheels cars (to go with his birthday gift quilt). For Joseph, Sandy had asked for more of the wrap around bibs, so I made 6 of them for him:

Front: left--free design from EmbroideryDesigns.com stitched on white french terrycloth; right--free design in 2006 from CME magazine, lettering added by me. I used a white permanent topping under the Santa embroidery to make his face and beard stand out against the dark blue stretch terrycloth fabric. 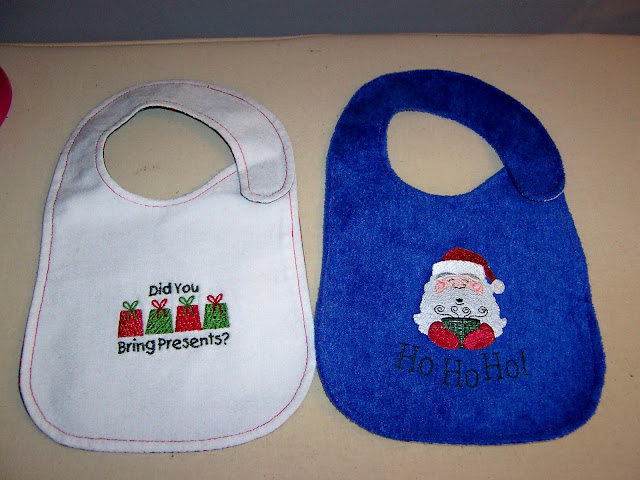 Back: Christmas cotton fabrics from my stash 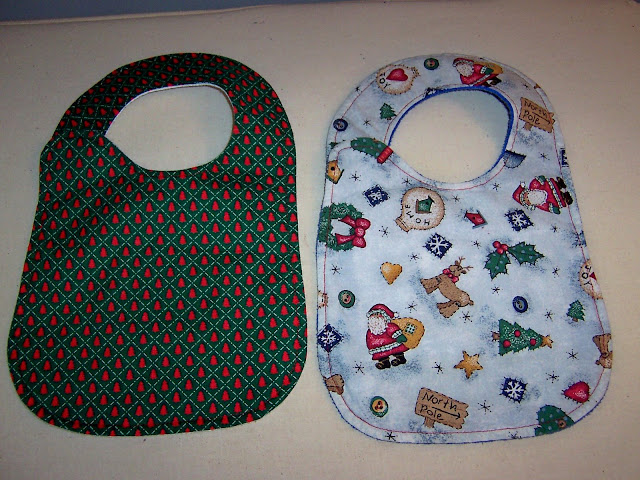 Another Christmas appliqué embroidery design purchased from Embroidery Garden, stitched on a remnant of sweatshirt fleece. 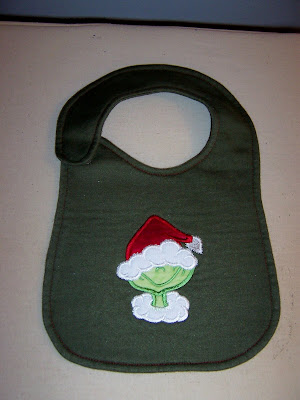 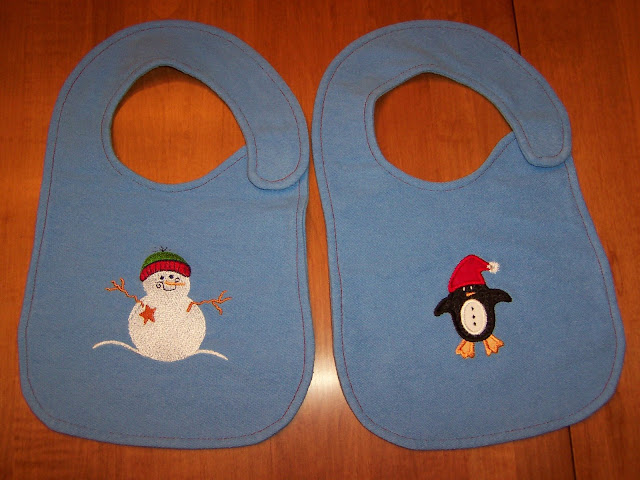 This was a free download in 2006, but I can't remember from where (white french terrycloth): 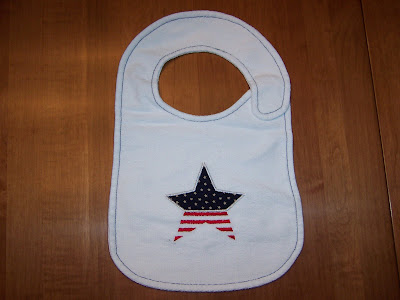 All of the bibs were were made from a pattern in the booklet "Boutique Baby" by Four Corners Designs. 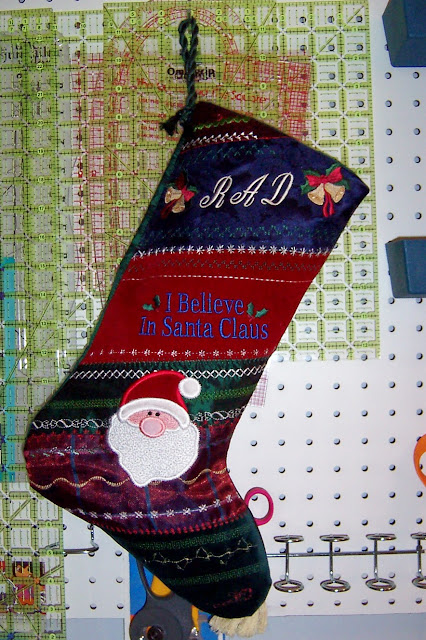 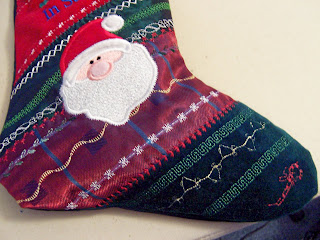 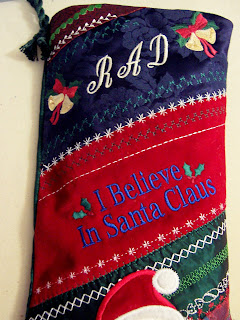 This one is for Richie D and was requested by his parents last year. The Backstory: I make an ornament for the first Christmas for each of our nieces and nephews; Richie's older sister Emily is our goddaughter and instead of making an ornament for her, I made a rather large hand stitched crazy quilted stocking which took me about 3 years to complete. When Richie came along, his parents asked for a "matching" stocking to go with Emily's. I said okay, but we agreed it would be machine stitched and smaller in scale. 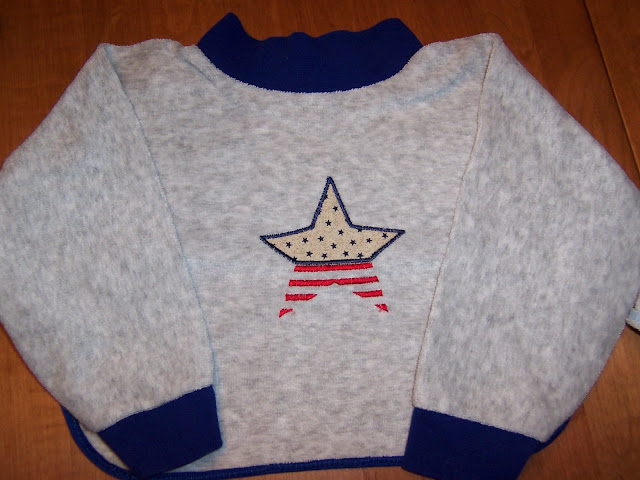 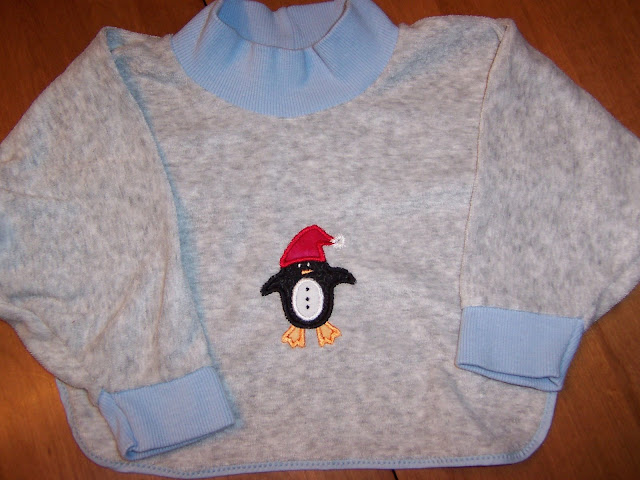 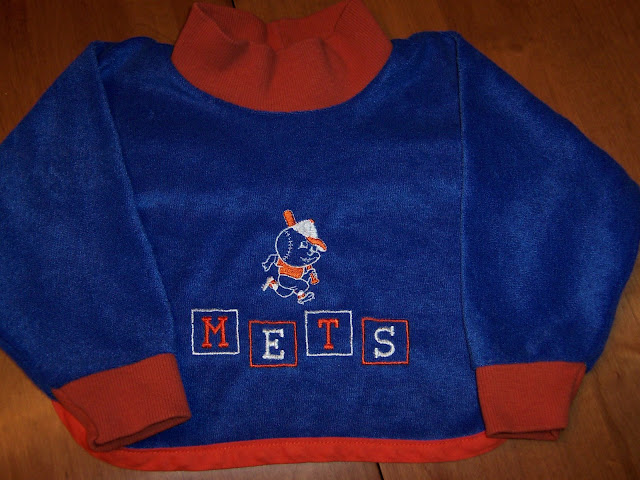 The running baseball embroidery design was purchased from Embroidery.com and I created the block letters using 4D Professional Embroidery software.

I bought gifts for Nikole, Elora, Jenna, Jack and Emily; but I still wanted them to have one handmade item, so I made some key chain fobs with their names on them: 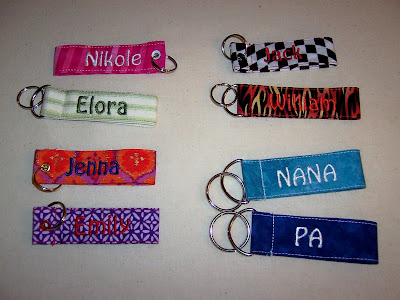 I was inspired by projects I read about in blog articles here and here. I also made a fob for William and for Rich's parents ("Nana" and "Pa" - we don't usually exchange gifts, but since they were quickies, Rich suggested I include them). 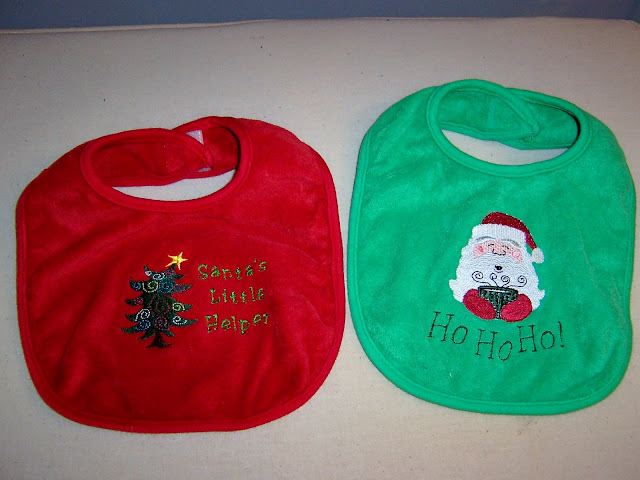 (I made similar bibs for the 3 new kids in 2006, but didn't remember to take photos last year)

Red socks embroidery design was purchased from Embroidery.com and I added the lettering and baseball outline 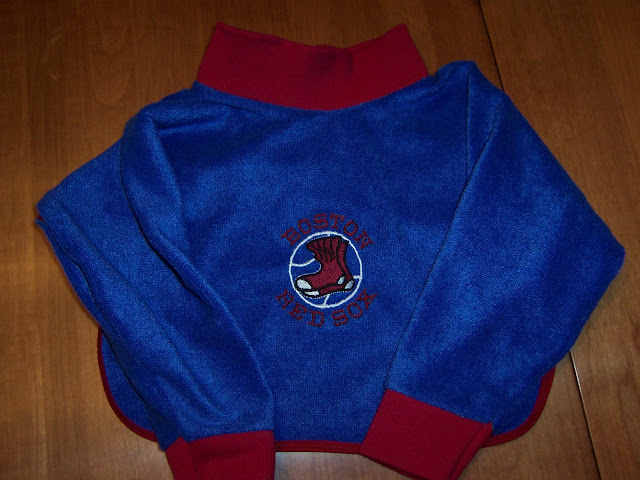 The appliqué embroidery designs for both fish are from Embroidery Library, A Sea Life Applique design pack. 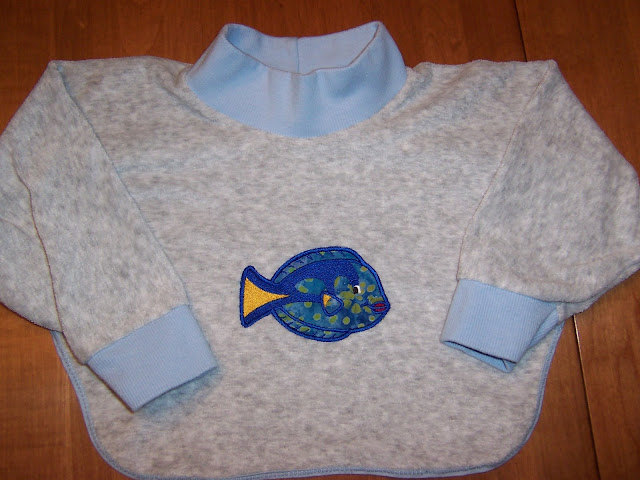 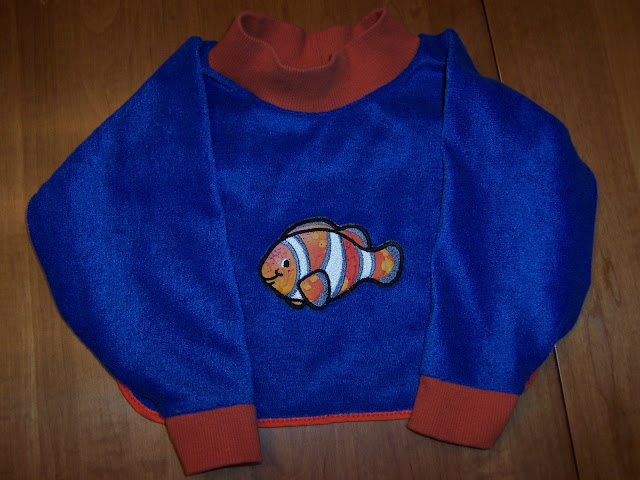 For Ryan's first Christmas ornament, I was inspired by this article to create a snowflake design using his name, mirror imaged and replicated. Gotta love that 4D software! 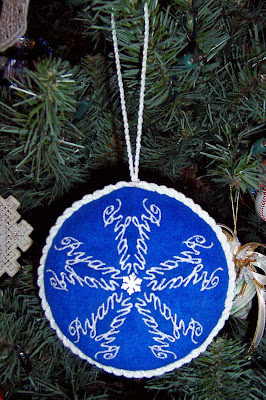 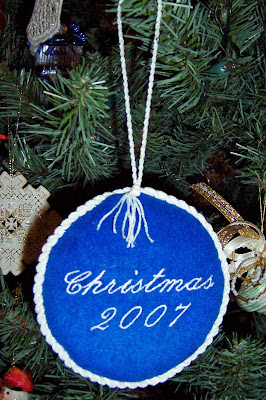 A few months ago I purchased the CD with the digitized faces for the new series of minkee hankie blankie pets - duck, frog and rabbit. The great thing about the embroidery designs on the CD is that they are set up to stitch in either a 4"x4" hoop for the faces only or you can choose to embroider the faces and sew the heads and "feet" together, all in-the-hoop. This is a great time-saver. (I bought the CD on eBay)

I made the frog for Ryan and the duck for Lauren: 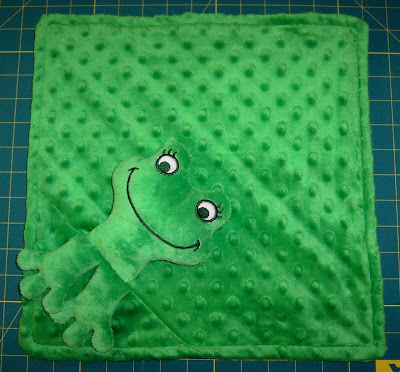 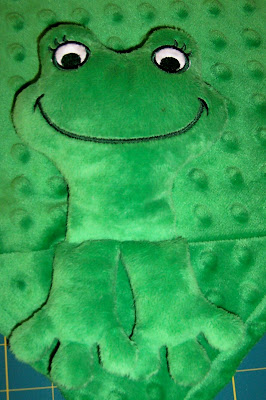 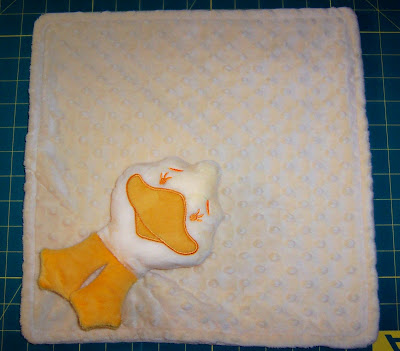 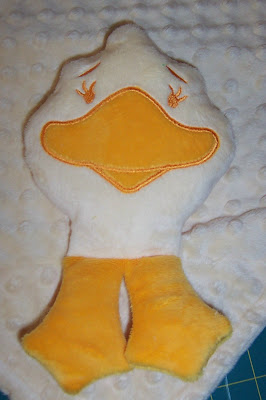 I also made these minkee blocks for Lauren: 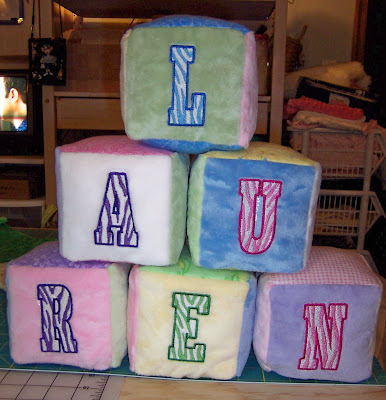 The Zebra alphabet and block instructions were purchased from OESD earlier this year. (I made similar blocks for Richie D in July)

Last year, Denise made tissue box "cozies" for the Material Girls/DKnJ. I liked mine so much that I copied her work, but made a few modifications so I could serge the seams and eliminate some bulk. I used Christmas fabrics and odd pieces of ribbon and twisted cording from old projects to gather the tops (used up some more stash!).

The pocket tissue holder is for Sandy . . . when I made her Chelsea backpack in February, it seems I neglected to include one for her (but all the other Chelsea recipients got one), so I decided to make us even. :-) 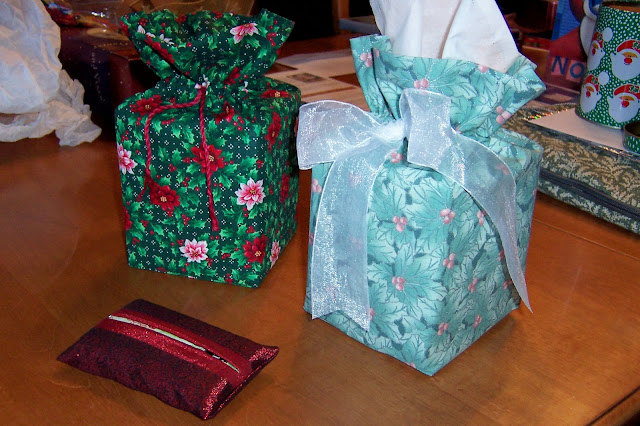 Early in the month I downloaded Embroidery Library's free designs for December and stitched them on hand towels for me and Rich: (I used a clear permanent topper under the snow people). 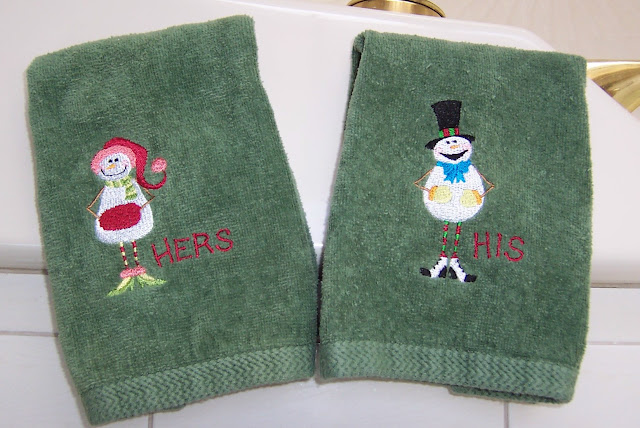 Other Christmas gifts included the Reusable Grocery Bags I made in September; they were generally well received and I plan to make some more in 2008 for anyone I missed in 2007.


At this point, I ran out of time for Christmas gifts; everyone else on my list received gift cards so that they would have at least something to open in time for the big day.

Our Material Girls/DKnJ Winter Lunch wasn't until January -- so I didn't work on those gifts until then. I'll blog those separately.

One project that was in progress and didn't get finished: Christmas Countdown Calendar from Embroidery Library. This tree is actually stitched from three separate embroidery files. It took most of a Sunday afternoon, but it was so cool to watch the segments of each file line up to form one giant tree. The directions from EL for this project are very good. I just ran out of time . . . I still need to stitch some of the 25 ornaments for the countdown and then finish the wall hanging. This will be on my To Do list for 2008.

There were several other Christmas projects for which I bought embroidery designs and fabrics and just ran out of time. I'm going to try fit those into my sewing schedule in early 2008 -- at least one project a month -- so that they will be done by next Christmas.
Labels: Baby and Kid Stuff Bibs-Burps-Blankies Holidays Machine Embroidery Sewing