Friendship is a Gift to Share: Girl and Westie Cross Stitch

I'm working my way through my collection of Westie needle art projects and this is my most recent finished piece. 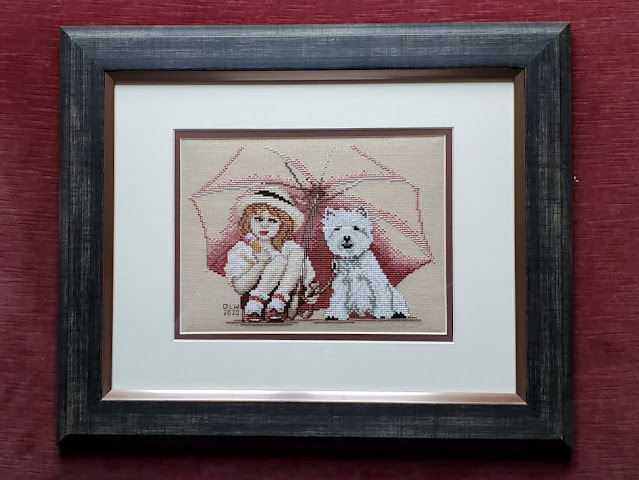 Here's a closer view of the finished cross stitching, before framing: 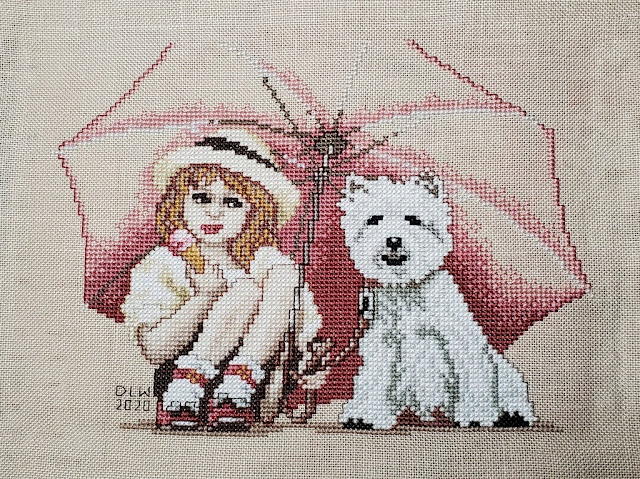 According to my records, I purchased this chart from Nordic Needle on January 11, 2002, just one week after losing my first best Westie girl, Wyndi. So this one is for her.
Thinking back to that sad time, I would have bought any cross stitch chart with a Westie on it, even though I couldn't bear the thought of working on it.
The chart pattern doesn't give the design a real name, the cover only identifies it as Kim Anderson Original, published by Rico Design. I'm calling this project Friendship is a Gift to Share, because that's the name on my figurine with the same image. It depicts a little girl and her dog sitting together under an umbrella as she easts her ice cream cone. 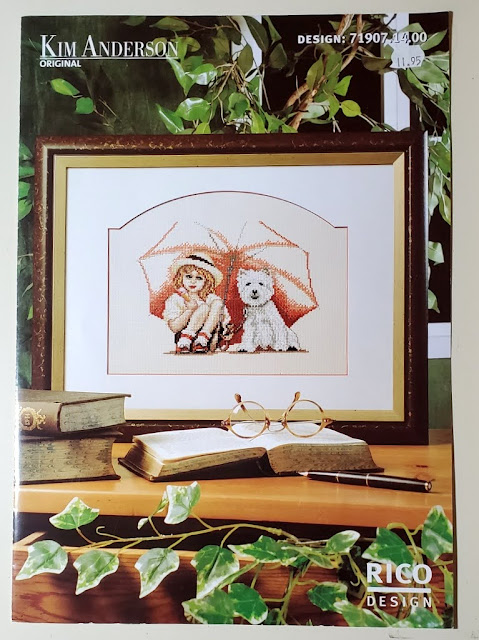 Around June or July 2019, I picked this chart out of my collection and pulled the threads and linen. I didn't get a chance to work on it last year, for various reasons.
This year I've been focused on projects that are partially finished or have been waiting for years in my collection. This one finally had the first stitch put into it on August 31 and the last stitch on October 1, 2020. I worked on it for a few hours at a time, almost every day through September.
When I cut the linen for this project, I think I originally intended to finish it as a flatfold easel, but as I progressed with the cross stitching, the size of the design made me forget about that type of finish. The pattern called for aida cloth and lighter, creamy colors, but I chose 28 count, light mocha cashel linen from my stash, which is a bit darker than the sample on the pattern cover photo.
I changed some of the embroidery floss colors used in the design, most notably black for the features on the Westie's face and paws instead of dark brown, and for the pink and red shades of the umbrella I used more rose red colors instead of the rusty brick colors in the pattern. I also changed the medium and dark gray shading on the Westie's body because I had run out of the "old" DMC 318 and the "new" 318 just didn't work for me. (Sometime in the 1990's, DMC reformulated some colors, including grays in this color family. If you've been cross stitching as long as I have, you'll understand why the "old" 318 would have been just right.)
The color chart was difficult to read in some areas because it doesn't use any symbols to identify the floss colors, as most counted cross stitch charts do. The chart consists of blocks of color and in a few cases they were very similar in shade, making it difficult to distinguish between them. As a result, I ended up pulling out stitches more than once because I had used the wrong color floss. 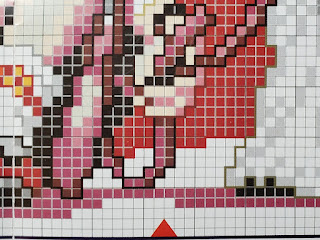 I was a little disappointed that the top of the umbrella was omitted from the charted design and considered adding the missing section myself, but couldn't come up with a satisfactory alternative, so the umbrella is stitched as designed.
The 11x14 wood wall frame was purchased from Michaels. I chose it because the black and brown finish and rose gold accent stripe around the inner edge of the frame complemented my needlework. And it was available in-stock and on sale at my local store, so I didn't have to wait to frame my project. I cut the mats myself from mat boards in my collection, the bottom mat is a dark chestnut brown and the top mat is a creamy color.
A Little More Background on the Design:
In June 2005 I purchased this "Westie and Girl Ceramic Figure" on eBay (for less than $20.00). I had to have it, because it resembled the cross stitch chart I had bought a few years earlier. I didn't think much about it at the time, other than it was cute, not too pricey and it had a Westie for my collection. I wasn't familiar with the names Enesco or Kim Anderson at the time.
I used this figurine as a reference to choose the lightest color when I changed the red and pink floss colors for the umbrella in the counted cross stitch piece. 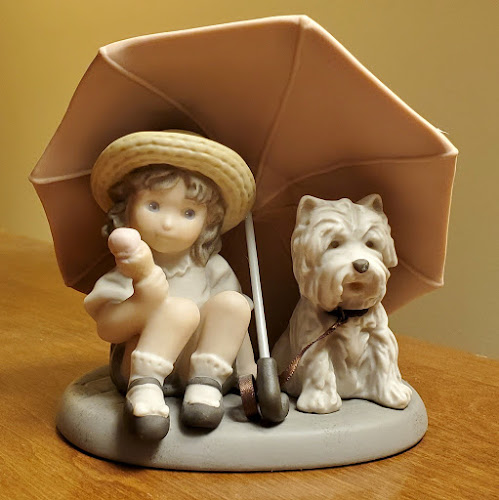 After I began writing this post, I became curious about the artist and decided to do a little research on the design. A Google search of "Enesco" yielded some background information on the company who sold these figurines and the original designer.
If you're interested, you can read a little history about the retired Pretty as a Picture brand figurines that were based on the photography of Kim Anderson, as well as some background information on the artist. I learned that the signature style of his photographs features a splash of color on a mostly black and white image. 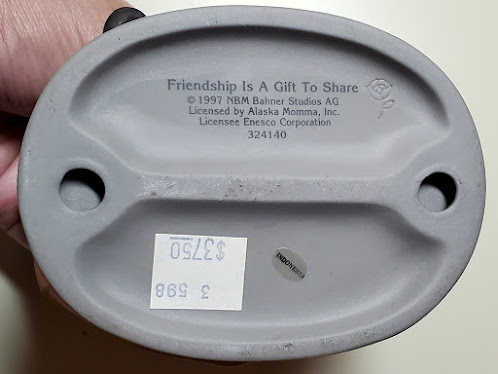 In November 2016, I found this purse at Scranberry Coop, a vintage store in Andover, New Jersey. Once again, as soon as I saw it, I knew I had to add it to my collection, because of the other two pieces with this image.
You can see the subtle shading added to the black and white photograph. This side of the purse is embellished with rhinestones - that's how I found it, I didn't add them. 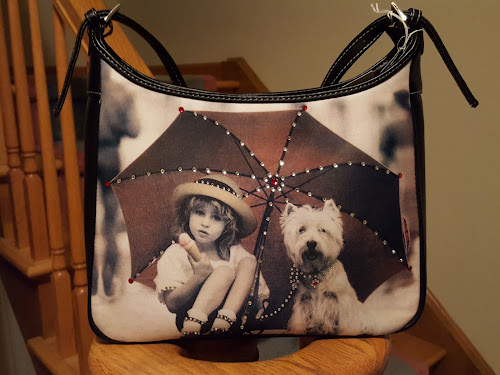 Here's a look at the back of the purse, without any bling. It's easier to see the neutral shading of the photography in this image. 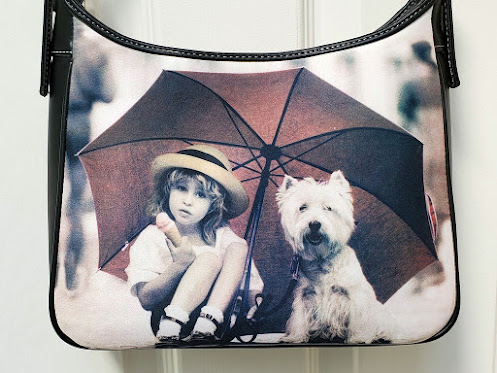 Having completed the counted cross stitch piece and compared it to both the figurine and purse, I think it's amazing how well the designer managed to capture so many details in the chart and translated it to fiber and thread!
Weekly photos of the needlework in-progress can be seen in my Friendship is a Gift to Share Google photo album.
Labels: Needlework Westie Embroidery Westies