I started making insulated water bottle carriers this past summer. My previous blog entry shared the first batch which included two that were supposed to be mine - the 'prototype' and a paisley terrier design. The former works, but isn't quite snazzy enough, while the later has been assigned to Bark Park duty for the Pesties. 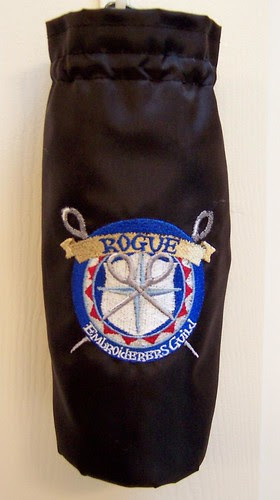 I needed a new one for me and chose this Rogue Embroiderers' Guild design from Urban Threads. The design was a freebie last fall; I was immediately attracted to it at the time because, well ..... it's not a real guild. But it's still embroidery and slightly wacky. I just didn't know what to do with the design until now ....

The border color in the original design needed to be adjusted so it would show up against the black nylon fabric that I use for my water bottle carriers. But I wanted to keep the spirit of the original design, so decided to experiment.

For the first stitch-out, I used dark violet-blue thread with a permanent white topper under the embroidery. The stitching turned out really nice, but I wasn't wild about how purple it was.

Since the stainless steel water bottle I use most often is blue, for the second stitch-out I used dark blue embroidery thread, but omitted the white topper. I definitely prefer the blue color way, but wish I'd used the topper again. (see a large version of this photo here)

The blue stitch-out became my new water bottle carrier; I incorporated a number of improvements to the should strap and hardware that evolved during the creation of the most recently completed carriers. 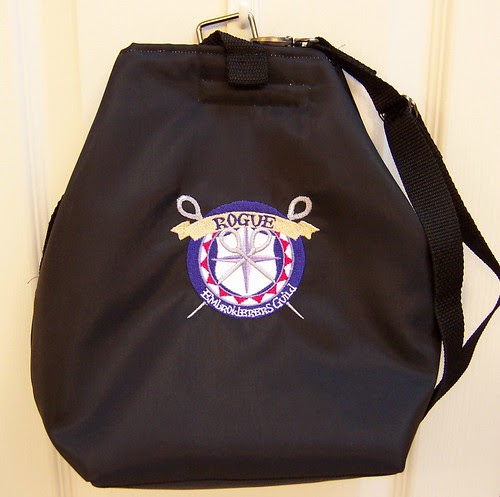 I couldn't bear to let the first stitch-out become an orphan, so I used it for my lunch bag prototype. See how nice and crisp the white areas are? That's because of the white topping I stitched over. I definitely need to use that again in the future. (see a large version of the photo here)

This is basically a simple square bag with boxed corners at the bottom. Think classic brown bag, but with insulation and a carrying strap. There's a layer of Insul-Bright between the outer cover and the inner lining. For a top closure, I added some white velcro to the inside, but that was an afterthought. The design needs to be tweaked a bit if I make more.

It's just large enough to fit a small lunchbox ice pack, a sandwich or two, a snack plus napkins or utensils.

I used this bag to carry my lunch to the PA Quilt Extravaganza in September and it did a great job of keeping my sandwich cool. I still need to test how it performs with something that needs to be kept cold, like yogurt or pudding, but since the water bottle carriers have kept cold water very cool for several hours, the lunch bag should do the same.