Last year (Summer 2008) I made cool ties for the Mahwah Marine Moms to send to the troops in Iraq, to help them keep cool in the desert heat, especially during the summer. The Moms shipped about 500 cool ties for the troops last year.
In April, Terry contacted me about making cool ties again this year. Even though some of the Moms' sons and daughters are finishing up their active enlistment, they are continuing to collect and send care packages for the Troops. In March they shipped 94 cases and later this year they will start another town wide [Mahwah, New Jersey] Support Our Troops Care Package Project in September.
This year, their contact is Chaplain Mike, who ministers to 7 units out of Indiana who are serving all over Iraq. A few weeks ago (mid-May), Chaplain Mike shared what the conditions are like:
"The average temperature this past week, has ranged between 115 and 126. It is so hot here, the toilet water is hot, the shower/sink (on cold) is hot. If you have eye drops in your pocket and use them it feels like you are squirting hot water in your eyes. Cold, bottled, water only takes about ten minutes to get to where you are drinking hot water. When the wind blows, and it is 120+ you feel like you have a blow dryer in your eyes and your eyes dry out. We had a sand storm blow through. What a pleasant experience to have it be 110 at night, with hard blowing sand and dust hit you in the face and get into your nose, mouth and eyes. When we wear our "battle-rattle" (warfighter body armor) you can add 5 - 10 degrees to the temp." 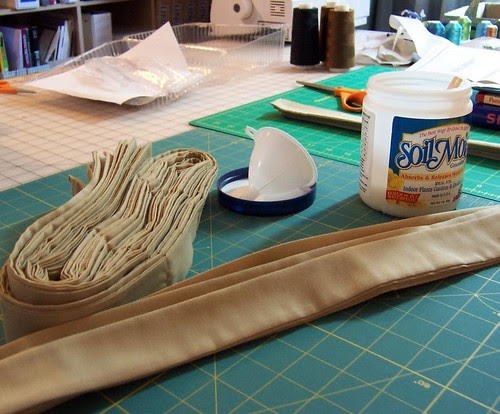 One of the reasons I haven't posted much lately is because I have been working on making more cool ties, as many as I can crank out this summer. I've been working on a few other projects, too, but instead of posting about them, I've spent that time making cool ties. I'll catch up on the blog eventually.
Last year, the deadline for shipping was in July, because the Mom's contacts were leaving after that and they needed a contact person in order to ship packages. This year they have Chaplain Mike for a contact through the summer, so I'll try to match my effort from last year. My plan was to make 20 ties a month last summer; so far I've finished 55 (delivered 35 to Terry, 20 are ready to drop off) which keeps me on target for April, May and part of June. I just bought another 5 yards of fabric, which should yield about 50 more ties I hope to finish by August.
If you'd like to help make Cool Ties (also called Neck Coolers) or donate items for care packages for the troops, you can contact Terry by email at MahwahMarineMoms at yahoo dot com for more information. Instructions can also be downloaded from my Google site. I've also embedded a Picasa Photo Album below showing how to make Cool Ties.
You can find photos with instructions in my Cool Ties Instructions Google photo album
edited Aug-9-2020:  remove broken links to Picasa web albums, replace with Google photos
Labels: Community Service Cool Ties Sewing Tutorials and How-to's