Both of these mini wall quilts (see my previous entry) are complete. 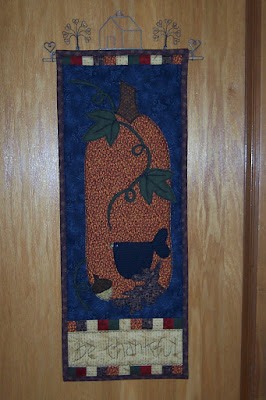 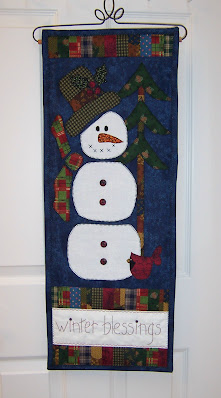 Halloween was kind of a let-down; we don't usually get too many visitors, but this year our only trick-or-treaters showed up at 3:30 pm. One group was about a half dozen runners from Don Bosco Prep who happened to run a lap around our cul-de-sac around the same time I was out with the Westies, who were wearing their Halloween neck ruffles and barking greetings as the boys passed. I guess on their way back to campus they decided to try to score some candy. One of them had taken off his t-shirt and knotted it for a trick-or-treat bag. Silly boys. We hadn't even thought about getting the candy bowl ready yet, so I had to make them wait while I opened a bag, gave them each a pack of M&M's and sent them on their way. Just a few minutes later, a girl in her teens appeared at the door with two doggies in costume, so we treated them with M&M's too.

Since it was a Friday afternoon and they were already ringing the bell, I thought we might be in for a long night so got the Westies dressed up in their Peter Pan and Tinkerbell costumes, filled up the candy bowl and waited for the rest of the kids to show up. The bell didn't ring again all night and we finally turned off the front light at 10pm. It's a good thing we didn't buy too much extra candy.

Anyway -- On Saturday I was more than ready to get the Halloween decorations down and put away and to bring out the Thanksgiving pieces. And that put me in the mood to work on the Be Thankful wall hanging so that it would be finished in time for Thanksgiving.

As I mentioned in my previous entry, I wanted to added some stitches around the words: 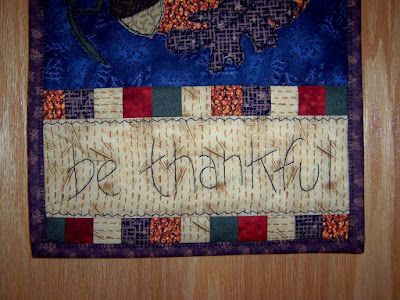 Also, the crow needed an eye; I hand stitched a white glass seed bead layered over a black sequin: 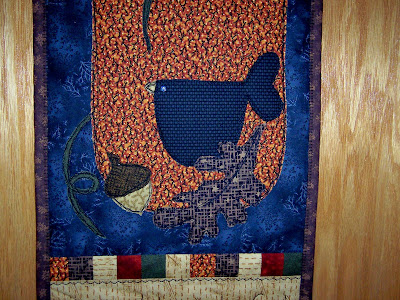 And then it was ready for binding and hanging: 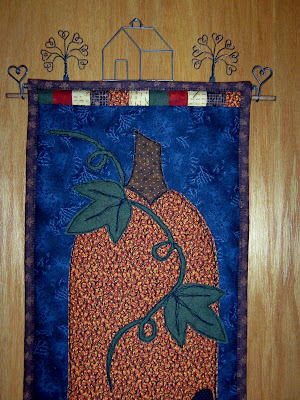 The background fabric appears to be blue in these photos but it is actually charcoal gray; I enhanced the photos so that the details would be visible and that seems to have altered the color.

The hanger has been in my "collection" for well over 10 years. I don't remember which one of the many stitching festivals at which I might have purchased it, but there's a notation on the packaging that I paid $15 for it. I do remember thinking it would be perfect for hanging seasonal bellpulls or other samplers (as an inexpensive alternative to framing) if and when I ever got around to stitching them.

At one time, I had quite a collection of bellpull hardware, most of which I sold on eBay a while back. For some reason, I held on to this one. I never did get around to hand stitching those seasonal samplers, but, as it turns out, this hanger is the perfect width for these "backdoor" sized mini quilts, so at last I can use it! 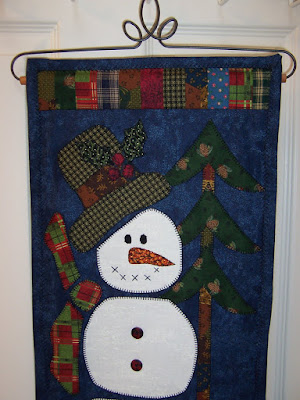 Once the Be Thankful quilt was finished and on display, it felt like I should finish up the Winter Blessings quilt, too. Besides, my sewing machine is all set up for it with a quilting needle and dual feed foot.

There was very limited quilting done so far, but I couldn't think of anything more I should or could do since there was very little space in the background for extra stitching. I hand stitched the snowman's mouth, and attached a white seed bead for the cardinal's eye. Then I sewed the buttons for his chest and the dots of the i's through all the layers. The piece seemed pretty secure so I decided to go ahead and attach the binding without any additional quilting.

The hanger for this one is borrowed from another wall-hanging so that I could take photos, but it may become permanent, since it seems to suit this piece so well. 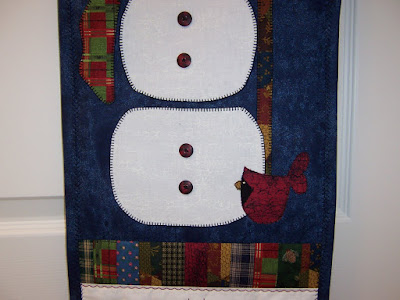 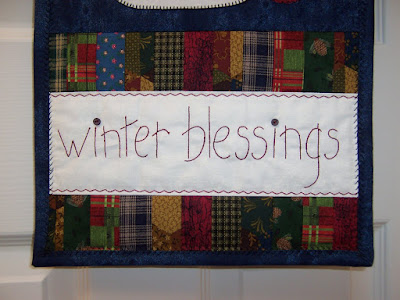 So what did I learn from these two projects?
Although two full months elapsed between the days I started and finished these projects, had I worked on them without interruption of other projects (like t-shirts and doggie costumes), I probably could have completed both in about two weeks. That's encouraging, 'cuz I have a feeling I'll be doing some more quilting in the next few months.