Last Friday was my birthday . . . I'd rather not reveal my exact age, so I will just say that I was born before the first opening day at Shea Stadium, but I'm not as old as the Mets franchise. You do the math.

Usually, the Mets do not play on my birthday because in most years it falls right in the middle of the All-Star break. But for some reason, the All-Star game is on the 3rd Tuesday of July this year. And if we didn't already have tickets for all the Sunday home games, we probably would have gone to Shea for my birthday.

Instead, we did the next best thing -- we went to the opening day of the All-Star Game FanFest at the Javits Convention Center in NYC. Even though the game is being played at Yankee Stadium, we didn't want to miss the opportunity to experience the All-Star festivities. 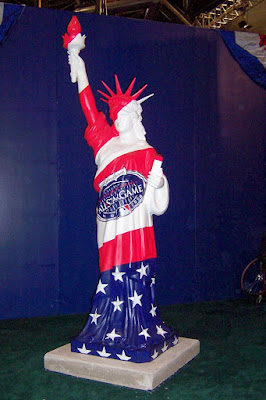 It was a fun day -- most of the attractions are oriented towards kids but there were enough interesting exhibits for us to spend several hours. We arrived around 11:00am and on the way in we were given a reusable souvenir tote bag made from recycled materials, a Baby Ruth candy bar and a few other promotional items. Just inside the main entrance, we could not resist the aroma of Philly cheese steaks, so decided the first stop would be for lunch. They were good for convention food, but I've had better.

After lunch we started making our way through the convention center. The first exhibit was a tribute wall to Yankee Stadium from the early 1900's through today. It was interesting to read the notes and commentary about the legends of baseball; and it was amusing how little was mentioned about the years after 2000 and today's team.

Next, we browsed several booths of art work -- paintings, prints and 3-D sculptures of popular sports figures and events. I guess it was to be expected that most of the pieces would feature Yankee players, since they are the host team.

There were several photo op attractions, where fans pose for a replica photo of a magazine cover, a baseball card, a recreation of a catch . . . but the lines were quite long so we passed on those. We did find a do-it-yourself cut-out where we posed as National League All-Stars: 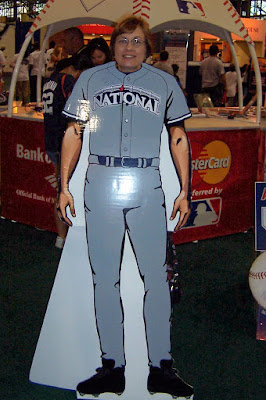 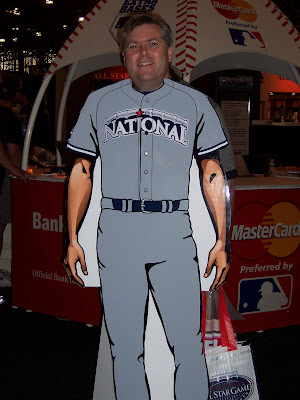 We wandered through the Hall of Fame exhibit which had cases of artifacts from the early days. It's amazing the players could even catch a ball with some of those old-time gloves! Another exhibit provided historical information about the Negro Leagues. In another section, examples of the annual trophies and awards were displayed.

Near the end of the day we shopped for some souvenirs, starting in our favorite section:

First, I found this key ring -- and I just had to have it: 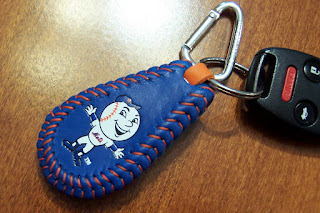 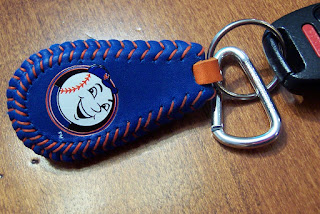 I was freezing inside the air-conditioned convention center, so decided to look for a sweatshirt. There were no mirrors to help me decide what size to buy, so Rich took my picture (I wasn't entirely ready, which explains the goofy expression): 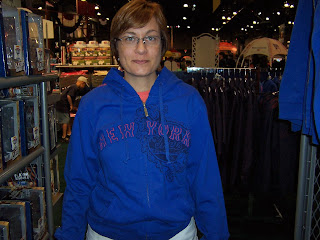 We spent a sufficient amount of money on some other Mets and All-Star stuff, but we weren't allowed to decline the plastic Modell's bag at check-out. I don't see why they bothered to hand out the re-usable tote bags on the way in if they were going to insist on us using a plastic bag later. And another thing -- I give the convention center and FanFest organizers credit for putting out separate containers for disposing of trash and recyclables; however, the bins for recycling were not marked clearly enough. They had signs on them, but not where they were really obvious, so when we put our plastic water bottles in the recycle bin, we noticed there was lots of trash mixed in.

By 3:00pm we were worn out and ready to go home. Of course, we watched the Mets vs. Rockies later in the evening and they won for the 7th game in a row.

The day before my birthday, Thursday, my parents stopped by to give me a birthday package. It was wrapped in a blue gift bag with orange ribbon . . . just a hint at the theme of the gifts. On top was this cute beanie baby wearing number 5 in a Mets uniform: 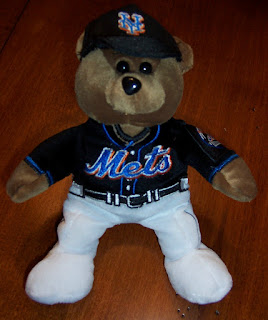 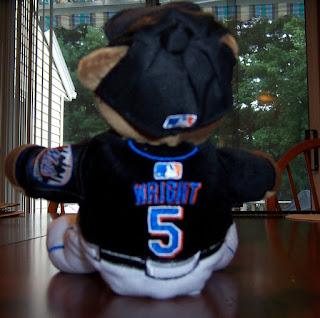 And inside the package was a wind jacket and a shirt: 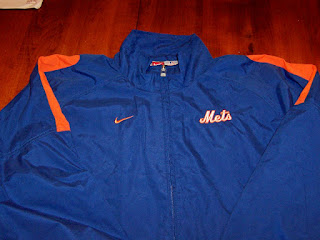 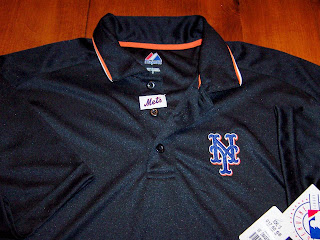 The jacket is a youth XL and fits me all right; the shirt is a men's small, but it is much too large, so I will probably try to exchange it for a smaller size or get it big enough to fit Rich.

Later that day, during the last hour of balloting, I voted online as many times as I could for David Wright to be the final player for the All-Star game. We were very disappointed when he finished in second place. But eventually he was selected to replace an injured player, so we are glad that Billy Wagner won't be the only Met on the All-Star team.

Sunday night was the last game before the All-Star break and it was scheduled to be a night game for ESPN. A few weeks ago, it might have been just another game that maybe they would win or maybe they would lose . . . but they've suddenly gotten hot and have been on a winning streak ever since the series with the Phillies. Saturday's win was the 8th in a row -- the streak couldn't continue through Sunday night, could it? We were really looking forward to going to this game, especially to see Mike Pelfrey pitch. We haven't been to a game this year that he started and since he's been winning, we hoped he'd continue the streak. But we were also prepared that it might end at eight . . .

The way I remember the first inning, it started out with a lot of balls. The first batter was on 1st base awfully quick. But before we could start to get nervous, they completed a double play and a strike-out and that was it. The Mets went on to score 7 runs and Pelfrey allowed only a handful of hits but the Rockies scored no runs. He did a great job and lasted until the eight inning. With two out and two strikes on the batter, the crowd went wild cheering him on for strike three. Instead he allowed a the batter to reach base, not just once but twice. All the way through each at bat, the crowd around us was cheering "Lets Go Pelfrey" and "nine in a row". It was almost like a playoff game, it was so loud and intense. When the final strike of the third out was called by the umpire, the stadium roared! It was great.

So in spite of all the anxiety and histrionics of the first half of the season, the Mets are in second place all by themselves, just 1/2 game behind the Phillies. There are still a lot of games left in the season and I just hope they can keep on winning most of them.

And that's how I spent my birthday weekend. I never did get a cake or candles to blow out, but my team won nine in a row -- and that's a pretty nice birthday gift.